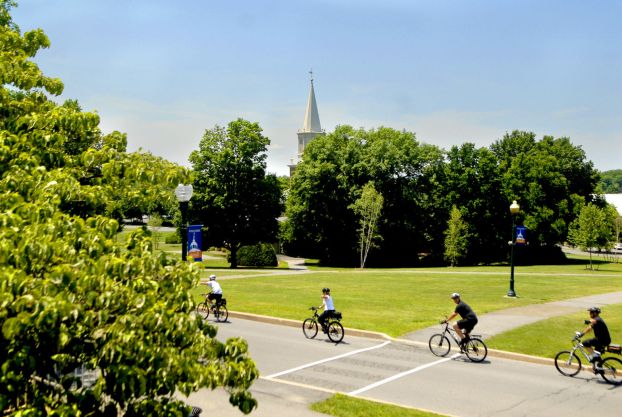 LEWISBURG — There is a racism problem at Bucknell University, President John Bravman told more than 1,000 students, faculty and staff at an address Tuesday following Monday’s expulsion of three students for making racial slurs and promoting racial violence during a live broadcast on the campus radio station March 20.

In an email sent late Monday night to students, staff and faculty, Bravman shared details of the expulsion, including the language the students used: “Student 1: “(N——)” Student 2: “Black people should be dead.” Student 3: “Lynch ‘em!”

Bravman said he shared the slurs “in the interest of transparency and candor.”

“Please know that it troubles me deeply to have to reiterate the comments in any manner, much less in a note to our Bucknell community,” he wrote in the email.

Bucknell Spokesman Andy Hirsch confirmed Monday the students have been expelled but did not identity them.

While there were no next steps discussed during his talk, Bravman spoke sincerely and aims to be transparent and proactive addressing the issue, Hirsch said.

“The message of (Tuesday’s) meeting was we need to acknowledge that this is a problem here, whether we like it or not,” Hirsch said, “and everyone has to play a part in trying to advance this forward. That was the main message.”

“Bravman spoke from his heart about the urgency and importance of recommitting ourselves to working toward a more inclusive and supportive community for all, especially our students of color,” Daubman said. “His remarks inspired me to reflect on what I can do to help create a better campus climate. We need to listen to each other, to empathize and to intervene when we encounter racism.”

Daubman also said Bucknell needs to redouble efforts to increase diversity among faculty, staff and students and create “a more inclusive, supportive and welcoming campus. Faculty are eager to be an important part of this process,” she said.

The students were suspended pending further investigation and subsequently expelled Monday, Hirsch confirmed. They have not been identified.

In his email, Bravman said it is “clear to me that this is not an isolated incident.” However, Hirsch said Bravman was not referring to other specific incidents on campus.

“Racism exists on campuses across the country and, in fact, throughout society,” Bravman said. “We cannot ignore the fact that it also exists at Bucknell and that some in our community experience it often.”

Bravman spoke at noon Tuesday to more than 1,000 people — an address moved to the Weis Center for the Performing Arts to accommodate the crowd — to discuss the expulsion and resulting decisions.

The on-air slur incident happened before the March 24 appearance at Bucknell of Common, an Academy Award-winning hip-hop recording artist, actor and activist. His discussion covered topics including race relations.

The incident willnot interrupt plans of WVIA Public Media of Scranton to air Common’s show, which it recorded. WVIA Spokesman Doug Cook said there had been no discussion of changing the programming. The show began airing tonight at 7. Common was the third speaker in the Bucknell Forum series “Revolution Redefined,” which explores social changes.