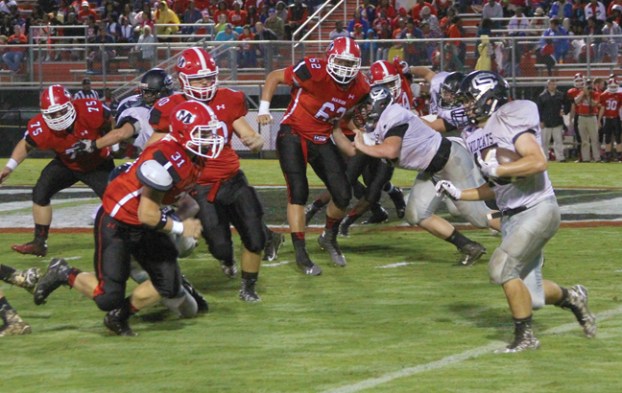 Michael Murray/Americus Times-Recorder: Schley’s Alec Harris (45) barrels past the Eagles’ defense with a handoff in the Wildcats’ Sept. 25 match against Marion County in Buena Vista.

BUENA VISTA – The Schley County Wildcats football team traveled to Buena Vista on Sept. 25 to take on neighboring rivals, the Marion County Eagles in the home team’s homecoming match.
The Wildcats suffered a tough loss in the match, with Marion taking a 46-0 sweep in the game.
Coming into the match, the Eagles were situated firmly in first place in region 4-A after dealing a 50-12 defeat to the Dooly County Bobcats in their only region contest so far this season.
The Eagles received the first possession, and the well-rested Marion County squad wasted no time plowing their way down the field. Lorenzo Smothers highlighted the team’s first drive with a 50-yard touchdown run to spark a scoring spree that would propel the team to a 27-0 lead at the end of the first frame.
Marion struck again at the 7:28 mark when Mykelle Kelley took off on a 60-yard run past the goal line, capping off a two-play drive. and adding to the team’s lead.
With four and a half minutes left in the frame, Smothers took off once again with a short pass to add another six.
Another 20-yard pass to Quantavis Clark on the Eagles’ next possession put the team back in the red zone, giving Smothers the opportunity to break the plane once more, catching a 15-yarder for his third TD of the game.
Marion’s kicker, Joel Barley, split the uprights on three of his four PAT attempts to give  the Eagles a 27-point lead going into the second quarter.
Smothers struck again early in the second stanza, pulling down a 34-yard pass to score another touchdown. Clark’s kick sailed far right, holding the Eagles’ lead at 33-0.
Schley’s Calvin Sims took the return kick, breaking at least three tackles to return the kickoff to their own 42 to the cheers of the visitor’s section of the stands, but Marion’s hard defense held the team to four downs, forcing another 30-yard punt from Corey Tanner.
With a reception to Jalen Tullis and a pair of runs by Kelley, the Eagles made the board again halfway through the second frame. Another successful point-after put the Eagles up 40-0.
To add insult to injury, the Eagles recovered their own on-side kick on the return, retaking the ball at the Wildcats’ 45. Unwilling to give up, the Wildcats forced a fumble in the backfield near the Eagles’ 30, which Marion recovered at a 15-yard loss. The Wildcats proceeded to force Marion’s first punt of the game on the return. Marion responded in kind, holding Schley to three-and-out and retaking possession at their own 30 as the clock ran down, signaling the end of the first half.
Marion held a homecoming ceremony and a celebration of the Tri-County High School’s 15-year reunion during half time instead of the usual marching band fare.
Schley opened the second half with a hard run by Alec Harris and a quarterback sneak by Glenn Pilcher, but Marion’s defenders forced yet another Tanner punt. Marion continued their scoring spree soon after having the ball surrendered as Cameron Cox crossed the line for the final touchdown of the game, putting the Eagles up by 46 after an errant PAT kick.
Despite the hard loss, many Wildcat defenders contributed hard tackles to help slow Marion’s progress. Wade Montgomery and Wade Rogers each added several stops to hinder the Eagles’ advances and Jake Hall gained a tackle for loss in the end of the second quarter. Cameron Dailey stepped up as well, adding some hard hits from the cornerback position as did Tanner, playing defensive tackle.
Schley’s regular returners, Sims and Harris helped to add what yards they could to the team’s stats, with Sims making an exciting 20-yard punt return. Sims also caught the team’s only completion of the match, grabbing a short pass from quarterback, Daniel Reese. Reese and fullback, Derric Tatum added yards as well against Marion’s experienced defensive line on several skilled runs.
The Wildcats return to action on Oct. 2 in Ellaville, battling the Central High School Hawks. The Eagles will take the field again on Oct. 2, facing the St. Anne-Pacelli Vikings in Columbus.

From the archives: Taking a journey through AHS’s historic 1965 season

This photo from the Sept. 11, 1975 edition of the Times-Recorder shows Bill Chambliss (20) gaining ground for the Panther... read more