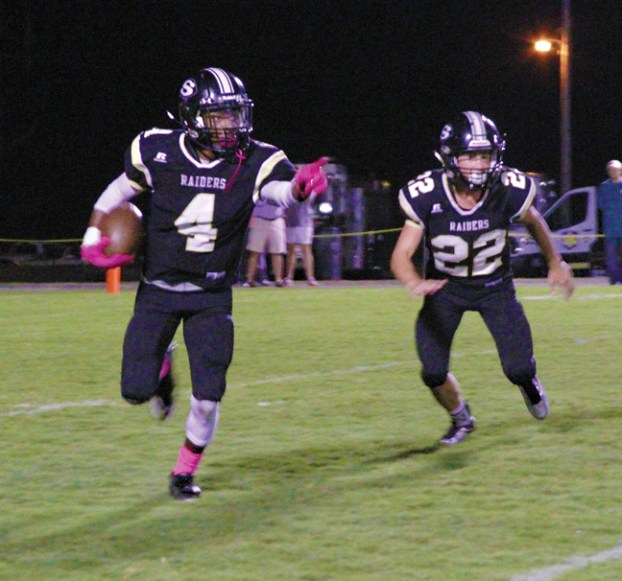 Raiders bested by Deerfield, 34-13 in Americus

AMERICUS – It was a perfect Friday evening on Oct. 9, when the Southland Academy Raiders returned to Harvey Simpson Stadium in Americus to battle the Deerfield-Windsor Knights. The fans piled into the stands to cheer on their team upon their return after two weeks on the road in what turned into a tough match for the home team.
After a hard fight, the Raiders were dealt a 34-13 defeat by the Knights.
Deerfield made the board early in the heated match, holding the Raiders to three and out before blocking a punt to take possession on the Raiders’ 35. The team pressed ahead, breaking into the end zone four minutes into the action. A successful PAT gave the team an early 7-0 lead.
Deerfield struck again later in the first, receiving a punt from the Raiders and scoring on a long bomb. As the team’s kicker went to add the extra point to the board, Southland’s Jamaal Rice came out of, seemingly, nowhere to stuff the attempt, stalling Deerfield’s lead at 13 points.
Despite a hard defensive push by the home team, highlighted by hard tackles from Houston Hawkins, Townsend Ray, Stephen Turton, Stephen Taggart, and Josiah Copland, among many others, the Knights would manage to expand their lead to 34-0 before the break.
A ceremony was held during half-time, honoring former Southland Academy athletes that had won state championships during the 1980s. Over 40 Southland alumni were recognized during the ceremony that had participated in teams that won a total of 18 state championships throughout the decade. Players were recognized for their talents in sports including football, girls’ basketball, boys’ basketball, swimming, baseball, girls’ track, boys’ track, and golf as Southland fans proudly cheered the athletes’ accomplishments.
The Raiders’ offense started making moves when the action resumed, fueled by a trio of fumble recoveries by Morgan Youngdale, Hawkins, and Ray.
Early in the final frame, quarterback, Alex Roach, connected with Ray on a long bomb that he pulled in over his shoulder before taking off for the end zone, putting the Raiders’ first points of the game on the board with a 53-yard play to the elation of the home crowd. Stephen Barnes split the uprights for the PAT, narrowing the gap to 34-7.
The Southland crew saw their chance again near the end of the quarter, as Logan Morris took off on a 43-yard jaunt, pushing the ball to Deerfield’s seven yard-line. After another short run by Morris, a Roach pass found Ray in the end zone for the team’s second six-pointer. The PAT attempt was blocked, leaving the score 34-13 at the final buzzer.
Roach connected on four passes in the match, with Ray and Copland each on the receiving end of two. Morris was the main ground-gainer for the Raiders with 48 yards, followed by Turton, who contributed 29.
The Raiders hit the road again on Oct. 16 for the team’s final away test of the regular season against the Westwood Wildcats in Camilla. They return to Americus on Oct. 23, facing the Tiftarea Panthers before wrapping up the regular season with a home test against the Memorial Day Blue Thunder on Oct. 30.