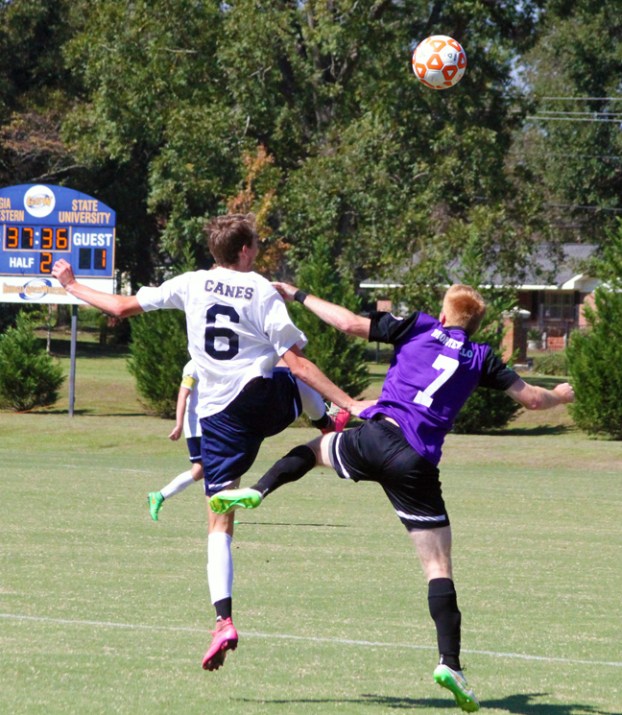 Michael Murray/Americus Times-Recorder: Brennan Bauschka (6) battles for control of the ball against a Montevallo opponent at Hurricane Field on Oct. 14.

No equalizer for GSW men’s soccer against Montevallo

AMERICUS – The Georgia Southwestern men’s soccer team suffered a 1-0 loss to the University of Montevallo on Wednesday afternoon in Peach Belt Conference play at Hurricane Field.
Southwestern’s record drops to 1-7-2 overall, 0-4-1 in the PBC, while Montevallo improved its mark to 5-7 overall and 3-4 in conference play.
The Hurricanes found themselves in a hole early, surrendering a goal less than 10 minutes into the match, for the second straight game as Soheyl Rafi pushed a deflected corner kick between the pipes in the ninth minute for Montevallo.
The 1-0 score held up the rest of the way.
GSW had several chances to deliver the equalizer. Silvio Polly had a shot sail outside the left post in the 17th minute. Zack Pirtle nearly broke free in the 42nd minute, pushing a shot wide. Brennan Bauschka had three of the Hurricanes’ six second-half shots on goal.
The teams finished tied in shots on goal (7-7) while Montevallo held a slight edge in corner kicks (7-4).
Joshua Swift saved six shots for GSW. John Evans stopped one for Montevallo in the first half. Yannic Horn played the final 45 minutes and turned away six.
The Hurricanes host No. 16 Young Harris on Saturday at 3:30 p.m.