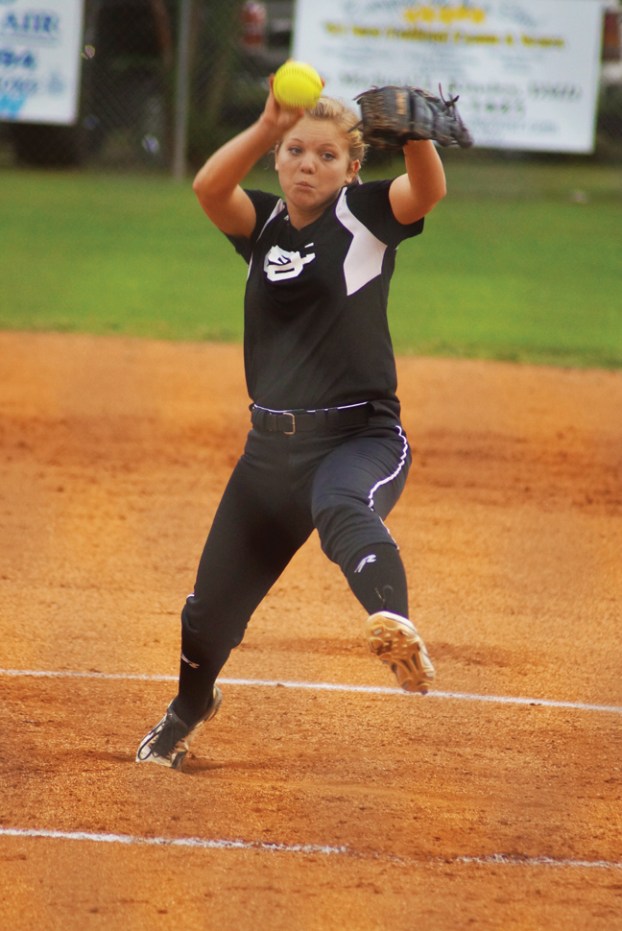 Photo by Tammy Satterfield: Lady Wildcat pitcher, Laine Frazier turns up the heat from the pitchers’ circle in an early October contest.

Schley County’s Lady Wildcats wrapped up regular season region play on Oct. 8, taking a 6-2 win over the Marion County Lady Eagles. After a rocky start to the season, the Lady Wildcats have steadily clawed their way back from a 2-7 record, improving to 7-3 in region 4-A and 11-10 overall.
With this impressive comeback, the Lady Wildcats have earned themselves a spot as the number-eight seed in the state playoffs, scheduled to begin Oct. 21. Schley’s girls will face the number-eight seeded, Charlton County Lady Indians in the first round of playoffs in Folkston.
The team has been busy this month, steadily improving their record. The Lady Wildcats opened October play, bringing in significant wins over Dooly County and Taylor County on Oct. 1 and 3.
The Taylor County match saw the Lady Wildcats take a 12-2 win, behind the talented pitching arm of Laine Frazier, who gave up only five hits in the match and struck out four opponents.
Altogether, the Lady Wildcats gained 13 hits in the match.
Bethany Phillips lent her impressive speed and batting skills to the win. Phillips paced the Lady Wildcats’ offense, batting four for five to hit one double and cross the plate four times. Phillips stole four bases in the match and brought in two RBIs.
Bailey McLaine doubled on each of her two hits in the match, bringing in two RBIs and scoring once. Carley McLaine and Brandilyn Cromer each gained two hits, stole one base, and scored one run. Emily Campbell gained a double on her sole hit of the match, crossing the plate once. Tosha Kirksey scored two runs and stole one base while Taylor Norris crossed the plate once and brought in two RBIs on her sole hit of the game.
The Lady Wildcats met Brookstone on Oct. 5 in Columbus for what, essentially, amounted to the region championship. Brookstone won the match 8-2, cinching their spot at the top of region 4-A.
Not to be outdone, the Lady Wildcats returned to the diamond in Ellaville the next afternoon, facing Brookstone once more. Schley’s squad gave the Lady Cougars a taste of their own medicine the second time around, grabbing a 7-2 win.
B. McLaine set the bar for Schley’s batters this time around, contributing three of the team’s nine hits. B. McLaine hit one double and brought in two RBIs. Megan Cosby contributed two hits to the win as well as one steal and one run.
Mindy Carol Register brought in two RBIs, Norris scored once, and C. McLaine batted one runner in. Phillips drew walks on each of her at-bats and reached on a wild pitch, scoring three runs and contributing three steals. Kirksey added one steal, one point, and one RBI to the team’s impressive game stats.
Frazier threw the entire match, striking out one batter and giving up five hits.
Oct. 8 saw the Schley team travel to neighboring Marion County to battle the Lady Eagles for the final contest of the regular season. Schley’s girls ended their region play on a high note, grabbing a 6-2 win over the Lady Eagles. The match marked the second time that the Lady Wildcats had taken down the Lady Eagles by a 6-2 margin this season.
The Lady Wildcats took the win despite falling behind in the batting battle, with only four hits to Marion’s seven.
Phillips, once again, paced the team in the regular season closer, contributing two hits, one walk, one steal, and one run.Register and Campbell each crossed the plate once and earned one hit. Cromer brought in one RBI on a sacrifice, while Kirksey brought in one runner on a fielder’s choice.
Frazier struck out one batter in the contest.
Lady Wildcat head coach, Jody Sellars, recently spoke with the Times-Recorder, saying, “I sent one of our coaches to take a look at Charleston earlier in the season because I had a feeling that we might end up facing them. If we can continue to play well defensively and be consistent from the pitchers’ circle, I really like our chances.”
It’s going to be a fight, for sure, but if we can get past the first round, I think we might have the easiest route of anybody,” he continued. “We’re in a good situation here and we’re getting hot at the right time.”