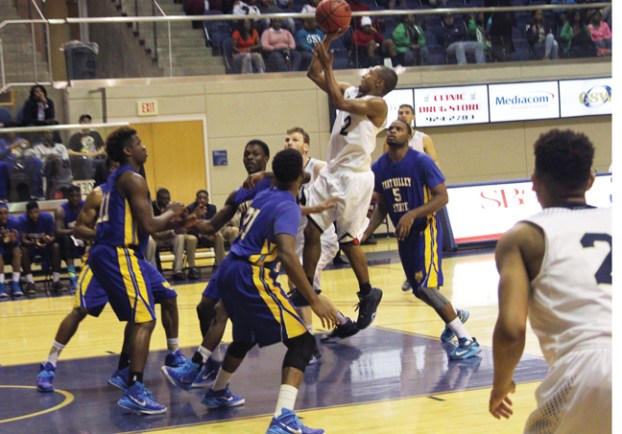 Michael Murray/Americus Times-Recorder: GSW’s Brandon Price takes a shot from the lane during the first half of GSW’s 2015 season opener against Fort Valley State University on Nov. 17.

Price, Wright come through for GSW in season opener

AMERICUS – Junior Karon Wright scored a game-high 22 points and fellow junior Brandon Price added 21 to lead the Georgia Southwestern men’s basketball team past Fort Valley State (FVSU), 89-85, on Nov. 17 in the Storm Dome in Americus.
It was the third straight opening day victory for the Hurricanes. Fort Valley State fell to 1-2 overall.
Americus native, Ralph Wilson, kicked off his homecoming by scoring 14 of FVSU’s first 15 points, including a 3-pointer that the 7-footer drained at the 16:03 mark to put the Wildcats ahead early, 7-2.
FVSU utilized a 10-3 run midway through the first half to open its largest lead of the evening, 22-12.
The Hurricanes were quick to respond with a 12-2 run of their own to snag their first lead of the game, 24-23, at 9:16 in the first half.
GSW held its largest lead of the contest, a 10-point advantage, for the first time with 45 seconds left before the break when Price drained a three-pointer to put the Hurricanes on top, 42-32. GSW led at the half, 42-34.
FVSU scored six of the first combined eight points of the second half to pull within four, 44-40.
A pair of Chandler Thomas free throws, followed by back-to-back three-pointers from Price and Damien Leonard nudged the GSW advantage back to 10 points, 50-40.
FVSU answered once again, this time with eight unanswered points to cut the lead to a basket.
The Hurricanes refused to relinquish the lead. FVSU tied the game at 55-55, 59-59, and one final time at 83-83, with the last coming with 1:12 to play.
Price and Wright each sank a pair of free throws in the closing minute to seal the win.
GSW finished with a lower shooting percentage (45.5%) than FVSU (51.6%), but won the rebounding battle, 42-37, dished out more assists (17-13) and made 17 more free throws (26-9).
Wright connected on five of seven from beyond the arc and six of 11 shots overall. Price was four of six from long range, seven of 11 overall, with four assists and two rebounds. Leonard scored 11 of his 14 points in the first half before exiting early in the second with an undisclosed injury. Adam Thoseby added 12 points and a team-best seven rebounds.
Wilson scored 15 points in the first half and finished with 21 overall to lead FVSU. Maritea Duke posted a double-double with 13 points and 10 rebounds.
Southwestern travels to Tuskegee on Nov. 21 for a 4:00 p.m. non-conference matchup. 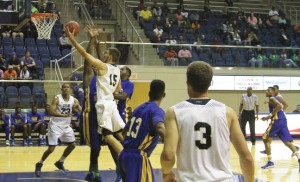