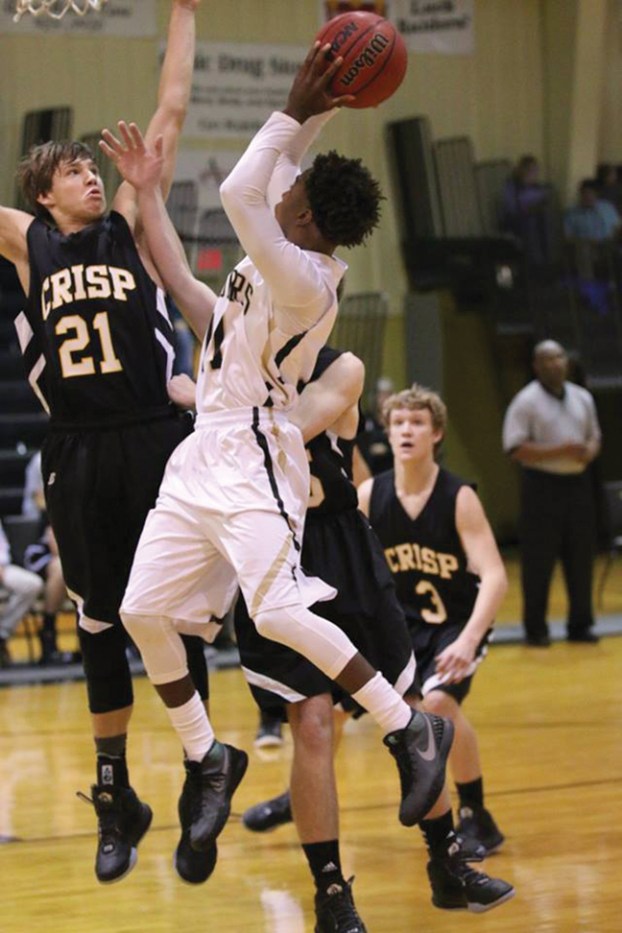 Photo by Sheri Bass: Jamaal Rice (11) leaps up to take a shot over a Crisp Academy defender during the Raiders’ Dec. 8 contest in Americus.

AMERICUS – Dec. 8 saw another great night of Southland hoops with the Raiders’ and Lady Raiders’ basketball teams squaring off against Crisp Academy in the Americus teams’ home openers. The non-region match saw the Lady Raiders succumb to a late surge from the visiting Lady Wildcats to take a 49-30 defeat. In the nightcap, the Raiders avenged this loss by cruising to a 59-24 win over their Wildcat opponents.
The Lady Raiders got off to a sluggish start when the action commenced, committing several early turnovers that led to a 13-4 deficit with two minutes left in the first quarter.
The Southland girls quickly rebounded, however, thanks to excellent defensive play that forced the Wildcats into committing key turnovers of their own. The Lady Raiders turned those turnovers into points and wound up going on an 8-0 run in the second quarter. Both teams battled back-and-forth the rest of the half with their tough, physical play. At halftime, Crisp Academy remained on top with a 23-18 lead.
After the break, the Lady Raiders came out struggling on offense, allowing the Wildcats to extend their lead to 30-20. Just as the game was starting to get out-of-hand, Southland’s Kathleen Kinslow and Cassi Bass sank two clutch three-pointers to ignite Southland’s offense and fans. The home team’s tough resiliency helped them trim the Wildcats’ deficit to just two points.
Despite the home team’s exhaustive comeback effort, the fourth quarter was all Crisp Academy. The Wildcats ended the game on a 19-1 run to secure the 49-30 win. The 0-2 Lady Raiders played well, due in part to great, gritty performances from Macy Williams and Savannah Banks, and made this a much closer game than the final score would suggest.
On the flip side, the Southland boys’ team got revenge for the girls with a 59-24 blowout victory over the Wildcats.
The game started out close and featured both teams playing stellar defense. The turning point came when the Wildcats were up 13-12 mid-way through the second quarter. A go-ahead three-pointer by Landon Henson put Southland up 15-13 with 4:28 left in the half, and the Raiders never looked back.
From that point on, the Raiders took advantage of Crisp Academy’s turnovers en route to an astonishing 33-2 run.
Everybody contributed in major ways including Jamaal Rice, Alex Roach, and Bo Moore, who each shot three-pointers that electrified the Raider faithful.  With a commanding 49-19 lead at the start of the fourth quarter, Southland was able to rest their starters as they cruised to the easy victory.
Such an impressive win has set the stage for what should be an exciting season for the 2-0 Raiders.
Look for both Southland teams to continue their solid play on Dec. 12 against the Westfield Hornets. Tip-off is scheduled for four-thirty in Americus.
The Raiders and Lady Raiders open region play against Tiftarea on Jan. 8, battling Tiftarea in Americus. 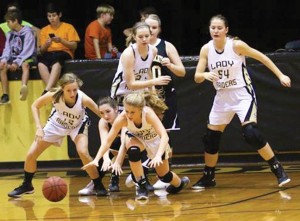 Photo by Sheri Bass:
Sydney Payne (12) and Chris Shattles (22) scramble for control of a loose ball against a Crisp Academy competitor during Southland’s Dec. 8 contest in Americus. In the background are, at left, Macy Williaams and Savannah Banks, at right. 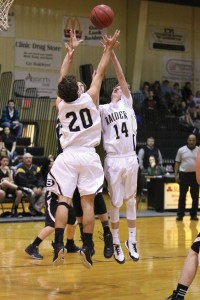 Photo by Sheri Bass:
Landon Henson and (20) and Ridge Roland (14) jump for a rebound on Dec. 8 as the Raiders take the win over Crisp Academy.