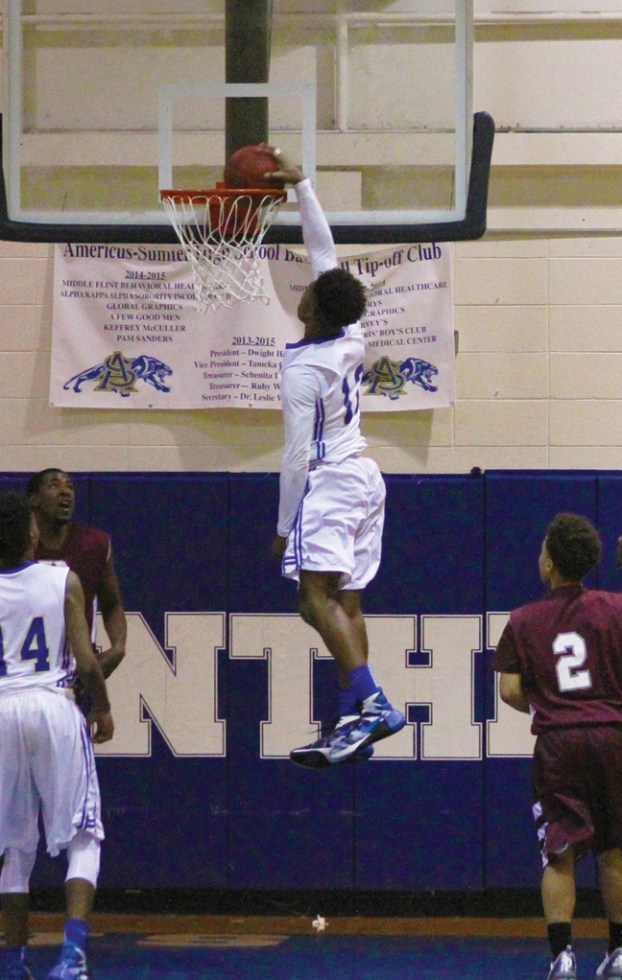 Michael Murray/Americus Times-Recorder: Kiante Sims executes an exciting dunk during the Panthers’ Dec. 8 contest in Americus. Sims paced the Panthers in the team’s Dec. 11 contest against the Monroe Tornadoes.

The Americus-Sumter Lady Panthers kept their winning streak alive over the weekend, taking a pair of hefty wins over Monroe and Westover, both of Albany. The Panthers, on the other hand, couldn’t seem to catch a break over the weekend, as they fell in both of their contests against Monroe and Westover. The pair of losses marks a four-game skid for the Panthers.
The Lady Panthers bested the Monroe Lady Tornadoes 68-34 in Albany on Dec. 11 before returning to Americus the next afternoon to take a 64-45 win over the Westover Lady Patriots at the Panther Den.
With the two wins, the Americus-Sumter girls remain undefeated after eight contests. The team’s region record is currently 6-0.
When the Panthers took the court, however, they would not be so fortunate. The Friday contest against Monroe saw the Panthers drop a 54-42 decision to the Tornadoes on their home court. The next afternoon, on Dec. 12 the Panthers batted Westover in Americus only to see the score tied 58-58 with nine seconds left in the game. A last-second surge on the part of the visitors allowed the Patriots to cinch the 61-58 win.
According to Lady Panther head coach, Sherri Harris, many members of the Americus team have been playing alongside members of the Monroe Lady Tornadoes for several years on Amateur Athletic Union (AAU) teams during the summer. Harris told the Times-Recorder that this fact generally makes the ASHS v. Monroe match-ups extra competitive.
In the Lady Panthers’ win over Monroe, Atyanna Gaulden paced the team, contributing 17 points. Timia Swanson and Jykiera Long joined Gaulden in double figures, with Swanson adding 14 points and Long tossing in another 10, six of which came from beyond the three-point line. Kayla Howard followed close behind with nine points.
Gaulden dished out eight assists and six steals in the victory, while Swanson contributed eight rebounds and six steals of her own.
On Dec. 12, facing Westover in Americus, the Lady Panthers saw four team members score double figures. Swanson led the way this time around, with 16 points, followed by Gaulden with 12. JaKala Stevenson stepped up to add another 11 and Howard tossed in 10 points for the win.
Swanson paced the team on the boards, bringing down 12 rebounds while Howard contributed eight. Gaulden led the team in assists, with seven while she and Howard each contributed three steals.
In the Panthers’ Friday action against Monroe in Albany, the Tornadoes came out fighting and amassed a quick lead, taking a 26-19 advantage into half-time. Monroe continued to pull ahead in the third frame before the Panthers attempted to stage their comeback in the final stanza. Americus-Sumter outscored Monroe 14-11 in the fourth quarter, but could not close the gap enough to alter the game’s outcome. At the final buzzer, the Panthers returned home with a 54-42 loss.
Kiante Sims set the pace for the Panthers with 14 points. Eric Hall followed close behind with 10. Aiden Sanford was third in line, tossing in seven points for the team.
Sims came down with six rebounds while he and Fred Bryant each contributed four steals to the team’s defensive performance.
Facing the Patriots the next afternoon, the Panthers returned to action fired up ready for a fierce match. The scores remained tight throughout the entire contest, with the Patriots taking a one-point lead into half-time.
Over the next eight minutes, the Patriots steadily clawed their way forward to take a four-point advantage into the final frame.
With the Panthers down 46-42 at the onset of the final quarter, they began to fight their way back into the lead. With one minute left on the clock, the Panthers found themselves up by one point. Westover came back to tie the score 58-58 with nine seconds left on the clock and made a last-ditch effort to break the tie which worked out in their favor when three last-second points put them ahead for good as they claimed the 61-58 win.
The Lady Panthers will take a short break before traveling to Atlanta to take on the Newton Rams at Phillips Arena at 1:15 p.m. on Dec. 21. The Americus girls will then stick around to see the Atlanta Hawks battle the Portland Trailblazers. The Lady Panthers will return to action on Dec. 28, participating in the Sunshine Shootout Tournament in Naples, FL.
The Panthers will take on Colquitt County in a neutral contest at Albany High School on Dec. 18 before battling Statesboro the next afternoon.