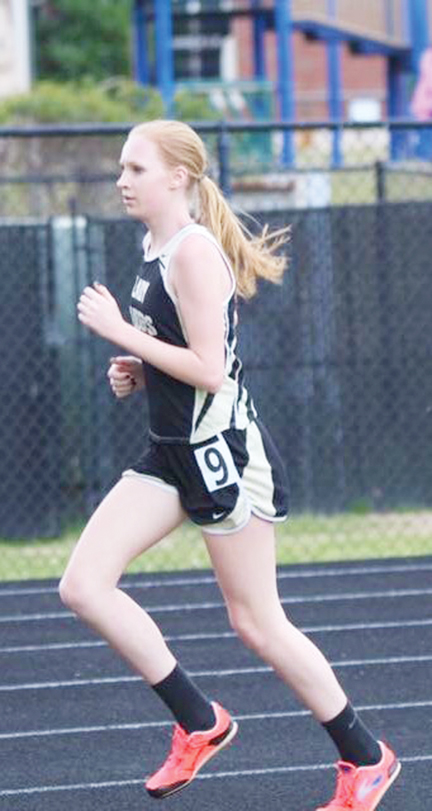 Photo by David Calhoun: Southland Freshman, Calyn Fort, took a third-place finish in the 3200-meter race at Brookstone and was the Southland women's team’s top scorer.

COLUMBUS – The Southland Raiders and Lady Raiders turned in several outstanding team and individual performances on March 12  at the Brookstone Cougar Relays in Columbus.
Facing three GHSA AAAAA schools (Columbus, LaGrange, Harris County), plus class-A power, Terrell County, host Brookstone, and Dothan Alabama’s Northview High School (an AHSA AAAAAA competitor), the Southland men finished in fourth place (just behind LaGrange), while the women finished sixth (just behind Harris County).
The top performer for the Raiders was distance runner, Wright Calhoun, who won the 3200-meter event in 9:56.35 and took third in the 1600-meter event with a time of 4:38. Calhoun also anchored the  4 x 400 relay team alongside Billy Calcutt, Brian Miller, and Ellis Ivey. The Raiders’ relay team took fifth place with a time of 3:46.65, beating last season’s state tournament time by three seconds.
Calcutt also picked up a pair of fourth-place finishes in the 800 and 3200-meter events, finishing the 800-meter event with a time of 2:13.92.
Ivey placed eighth in both the 110 and 300-meter hurdles.
Freshman, Bennett Carey, took fifth place in the 110-meter hurdles with a time of 18.4.
Morgan Youngdale earned a seventh-place finish seventh in the 400-meter event and Ridge Roland grabbed eighth in the 1600.
The school’s throwers excelled once again, with the duo of Stephen Turton and Stephen Taggart finishing in order in the shot-put. Taggart took  third place with a distance of 39′ 6” while Turton earned fourth place with a throw spanning 38’ 8.5” .In the discuss event, Turton nabbed a fourth-place finish with a 108’ toss and Taggart finished fifth with a throw spanning 102′ 11”.
Sophomore, Jamaal Rice, long-jumped 20′ 3″ to take sixth place.
Josh McKie finished sixth in the triple jump with a distance of 36′ 3″ and tied for seventh in the high jump.
Sophomore pole vaulters, Logan Morris and Brody Shattles, finished second and fifth, respectively.
Sophomore, Townsend Ray, turned in an 11.57 100-meter dash time against a strong field of sprinters, coming in sixth place.
The top scorer for the women was Freshman distance runner, Calyn Fort, who finished third in the 3200-meter event with a time of 13:29. Fort also earned a fifth-place finish in the 1600-meter event in 6:06. She then joined up with Freshman jumper, Sydney Payne, and Sophomores, Lilli Dickens and Alex Exum, in the 4 x 400 relay to place third in that event behind the “A” teams from Columbus and LaGrange.
Payne cleared 4′ 10″ in the high jump to take fourth place, then leaped 15′ 6″ to place fifth in the long jump.
Exum ran a time of 69.69 to finish fourth in the 400-meter dash, then took fifth in the 800.
Lilli Dickens came in sixth place in the 800.
Kaitlyn Smith threw the disc 76′ 10.5″ to place sixth. Smith finished seventh in the shot-put.
Southland’s varsity track and field teams return to action on March 16, opening their GISA season against Westfield in Perry.

‘Canes drop to 14-10 after Montevallo series