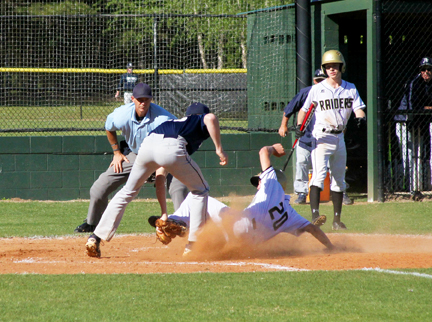 Michael Murray/Americus Times-Recorder: Southland’s Hunter McCain slides into home plate a split second too late to tie the score during the fourth inning of the Raiders’ April 8 tilt against the Brookwood Warriors. McCain contributed a double and an RBI to the Raider cause in the match.

AMERICUS – The Southland Academy Raiders baseball team saw some tough competition on the diamond on April 8, hosting the Brookwood Warriors in a region 3-IAAA match-up.
The game saw the Warriors pull ahead by five runs early in the second inning before the Raiders staged a comeback in the fourth frame to come within one run of closing the gap.
Brookwood wasn’t finished, however, and the visitors continued their hard offensive push, eventually sentencing the Raiders to a 11-6 loss.
With the defeat, the Raiders drop to 3-8 on the 2016 season.
Southland’s Hoyt Gurley opened the game for the Raiders on the mound as the visitors brought in a run in the first frame and went on to add four more in the second.
George Wall eventually broke the silence for the Southland crew in the bottom of the third stanza, opening the inning with a base hit on the first pitch delivered. Tyler Harrell followed with a single of his own before a sacrifice bunt from Will Hubbard put the Raiders’ runners within striking distance. Wall crossed the plate for the Raiders on a Harrison Bell ground out, followed by Harrell, who came in on a Reed Dillard single.
Finally, Gurley stepped up to the plate and blasted a hard shot to the center field fence, giving Dillard plenty of time to complete his journey home and narrow Southland’s deficit to 5-3.
Parker Weldon opened the bottom of the fourth with a double that was replicated by Hunter McCain on the next at-bat. Weldon rounded the bases, adding one more run to the Raiders’ tally. This rally would prove to be as close as the Raiders would get to a comeback (5-4), as McCain was later tagged for the third out barreling home on a wild pitch.
The Warriors went on to make up for lost ground in the top of the fifth, exploiting a series of errors to add four more runs. With one out to go in the fifth, Bell was brought in to pitch relief and, after one more runner made his way home, ended the frame with a strikeout.
Bell made his contribution to the Raiders’ final score in the sixth inning after being plunked for a free trip to first. Dillard followed, blasting a double to the fences to give Bell the chance to come home.
The Warriors put the game away in the following frame with a home run dinger over the fence off the bat of Brookwood heavy hitter, Reid May.
The Raiders added one more run to their final total after Weldon opened the bottom of the sixth with a double. Wall followed with a base hit to bring in Weldon and wrap up the game’s scoring.
Gurley did four and two-thirds innings worth of work on the mound for the Raiders, giving up four walks and striking out three batters. Bell trotted to the mound for the remainder of the contest, racking up five strike outs and walking three batters. Bell gave up only one hit during his time on the hill.
Wall and Harrell led the Raiders from the plate in the match-up, each collecting a pair of hits. Weldon, McCain, and Dillard each belted doubles for the Raiders in their sole hits of the game. Gurley connected on a single for the Raiders’ final hit.
Dillard brought in two RBIs for the Raiders while Wall, Harrell, Gurley, McCain, and Bell each brought in one.
Weldon crossed the plate twice for the Raiders, while Wall, Harrell, Dillard, and Bell each made their way home once.
The Raiders returned to action on April 12, traveling to Valdosta to take on region foes, the Valwood Valiants. The results of his contest were not available at press time. Southland’s boys will return to action on April 15, hosting the Deerfield-Windsor Knights.

From STAFF REPORTS ALBANY – The Southland Academy men’s track team traveled to Albany on April 6 to compete against... read more