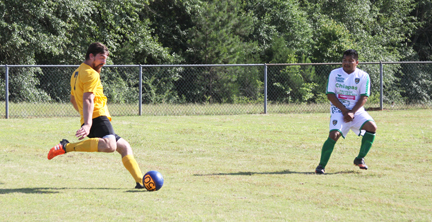 Michael Murray/Americus Times-Recorder: A member of the Chupacabras winds up for a powerful boot down the field during the team’s May 22 contest against the Jaguares

AMERICUS – The Americus Soccer League has kicked off its summer season. The competition began on May 14, as the nine teams from Americus and the surrounding areas began their struggle to reach the top.
Soccer enthusiasts of a variety of ages and backgrounds participate in the league. Many members of the Americus-Sumter High School Panthers and Georgia Southwestern State University Hurricanes soccer teams play in the league alongside other talented players.
Matches are scheduled to be played each Saturday and Sunday for the next seven weeks. The public is invited to attend and watch the games. 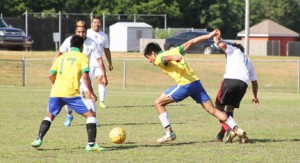 Michael Murray/Americus Times-Recorder:
Members of the Americus and Honey Badger teams vie for control of the ball during the teams’ May 22 match-up in at the Sumter County Sports and Recreation Complex. 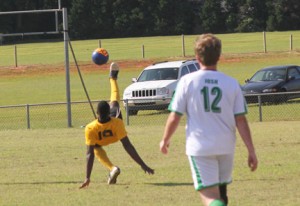 Michael Murray/Americus Times-Reorder:
In an impressive display of agility, a member of the Chupacabras drops back to kick the ball over his head in the team’s May 22 contest against the Jaguares.