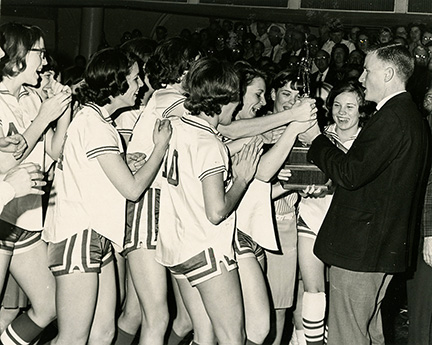 Submitted by Melvin Kinslow: Members of the 1966 Pantherettes celebrate their state championship victory as they are handed the tournament trophy after defeating Cochran in the title match on March 5, 1966 in Macon.

From the Archives: Taking a journey through the AHS Pantherettes’ historic 1966 basketball season; part eight

Editor’s Note: Here at the Americus Times-Recorder (ATR), we’re very proud of our area’s rich history of sporting excellence.
Our readers will remember that we recently decided to take off on a journey down memory lane and commemorate the fiftieth anniversary of the Americus High School (AHS) Pantherettes basketball team’s sweep of the state championship tournament, which left the AHS ladies at the top of the Georgia heap with an impressive 22-1 record on the season.
In our latest installment of the series, we discussed the Pantherettes’ first loss of the season; a narrow 59-54 defeat at the hands of Bacon County. Despite dropping the region 1-A championship match, the Americus ladies quickly picked themselves up and got back to work as they had a much more important target in mind; the state championship.
At the conclusion of our previous article, the Pantherettes had just earned a spot in round two of the state championship with a massive 71-44 victory over North Cobb. Following the team’s advancement, the local ladies immediately geared up to take on their next challenger; Monroe Area.
—————————————–
In the March 5, 1966 edition of the ATR, former sports editor, Clarence Graddick, penned an article on the team’s upcoming state championship match-up and the previous evening’s action, titled, “Pantherettes Shoot for 1st Girls State Title for AHS”.
“The Americus High Girls will be shooting to bring home the first state girls’ championship here tonight when they take on the Cochran girls in the finals…,” Graddick wrote. “Americus and Cochran gained the finals in come-from-behind wins in the semifinals Friday night. Americus topped a smooth-working Monroe Area team 65-54 and Cochran barely edged the defending champions, Bacon County, 55-52…”
Graddick went on to praise the team’s hardwood performance, writing, “Stalwart defense and timely shooting by sophomore reserve forward, Linda Montgomery, brought the Pantherettes up from a 4-14 deficit to an 11-point win over the losers. The three starting guards, Sherrell Bailey, Pam Tyler, and Sandra Belcher, as well as substitute, Irene Manning, clamped down on the talented Monroe forwards enough in the second and third quarters to allow the Americus forwards to find their shooting eye.
“Montgomery came on in the first quarter to score six of the first eight points for the winners and pull Americus within five points of the Monroe girls, who were leading at the end of the first period, 16-11. Montgomery’s two-pointer also put the Pantherettes in a tie with Monroe for the first time at 17-17.
“Jean Posey and Deborah Mason began to hit at this time but, again, it was Montgomery who put the Americus girls ahead to stay in the third quarter as she tied it at 34-34 with a field goal and hit another to make it 36-34. Montgomery wound up the game with 20 points but Posey led the Americus scoring with 29. Mason was also in double figures with 14.
“Jean Henson led all scorers with 35 points despite a good guarding job by the Pantherettes in general and Manning, in particular. Manning matched Henson in height and was able to hold her turn-around jump shot until she ran into foul trouble and eventually fouled out. Judy Coker added 12 points to the losing cause.
“The Americus forwards and guards turned in a good floor game again and showed championship form in remaining calm and pulling out of the deep hole the team was in in the first quarter. Posey and Belcher led in rebounds with each player pulling in six.
“Both teams shot well from the foul line with Americus hitting 19 of 25 for 76 percent and Monroe bagging 18 of 24 for 75 percent. The Americus forwards hit 23 field goals to 18 for Monroe with Posey and Montgomery dividing the honors here with nine each but Henson led in the game with 10.”
The article went on to say that the Cochran team would likely be playing in the title match without one of the team’s starting guards due to an injury the previous evening.
When, at last, the big moment came, Graddick was, of course, on the scene to chronicle the team’s victory, which he did in a March 7, 1966 article that was splayed across the ATR’s sports page with the words, “PANTHERETTES WIN STATE CAGE TITLE” in all caps. 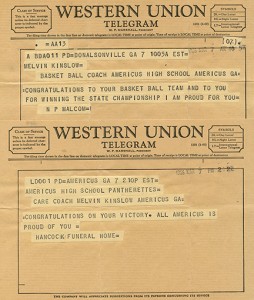 “The Americus High girls’ basketball team made their debut on television and won the accolades of the Americus fans in bringing home the first state basketball championship for girls in the school’s history with a 62-56 win over the Cochran girls here Saturday night in the first game of the Class-A finals…,” Graddick excitedly wrote. “The girls’ game was close all the way although Americus led throughout the last three quarters. Each team held the lead six times in the first quarter and the game was tied twice during that period.
“With only 16 seconds left in the initial period, Linda Montgomery hit a lay-up to put Americus in the lead to stay at 17-15. The champions then stretched the lead to 31-24 by the half behind the sharp shooting of Jean Posey. This was the longest lead held by Americus during the game, although it was matched several times in the last half.
“Posey led all scorers in the game as she came up with 39 points and was largely responsible for holding off a determined Cochran team. The Cochran girls had been forced to come from behind in both games they had played to reach the finals and put on several spurts which brought them within three points of the winners. The closest they came was two points as the score read 50-48 with but three minutes left in the game.
“The Americus guards again proved that it takes more than scoring to win a game as they turned in another excellent game on defense. Coach Melvin Kinslow used four guards, interchangeably, and they all performed well during the battle.
“Sherrell Bailey, Pam Tyler, and Sandra Belcher were the starters at guard and Irene Manning played much of the game as a substitute. Manning was the top rebounder with 10 and Bailey was next with six.
“Deborah Mason also hit on double figures with 10 points and the other starting forward, Jean Turpin, accounted for four points. Montgomery added nine points to the winning cause.
“A neutral observer was heard to remark during the course of the game that he had never seen a finer set of forwards than those playing for Americus. The remark included the all-around floor play as well as the fine shooting of the four used mostly by Coach Kinslow.
“While Americus was winning the game, the Cochran team was not idle and gave a good account of themselves on the floor. Joyce Brown led her team in defeat with 32 points and Loretta Francis contributed 15 and was a good source of constant trouble for the Americus guards with her rebounding ability.
“The Americus team climaxed a long road to the state title which saw the seniors on the team win 64 games in the last three years while losing only nine. A few who may have played as freshmen can boast of an 82-12 record which coincides with Coach Kinslow’s record in the four years that he has been a coach of the girls’ team.
“In the past two years, the Americus girls have gone undefeated in regular-season play but have lost three games during this time while winning 44. Ironically enough, the Region 1-A championship has escaped them both years and this is the first year that they were in the state tournament.
“This year’s record for the girls stands at 22-1. The only loss coming at the hands of Bacon County in the region finals. Bacon lost to Cochran in the semifinals of state play. 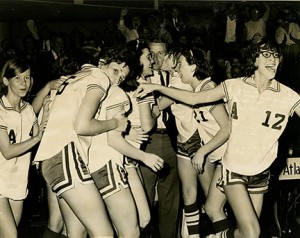 Submitted by Melvin Kinslow:
Members of the 1966 Pantherettes celebrate their state championship victory after taking down Cochran for the title on March 5, 1966 in Macon.