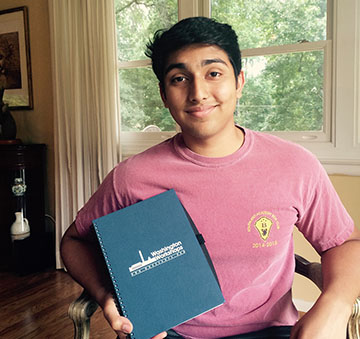 Zayd Hasnain, a Southland student, shows the notebook he used at the Washington Workshops Congressional seminar in the nation’s capital that he attended.

AMERICUS — With this a presidential election year in American politics, it is a stimulating time, especially for young people interested in political science, to participate in a seminar focused on learning more about U.S. government.
Zayd Hasnain, a rising senior at Southland Academy, was among the 55 national Congressional Seminar essay winners, high school students from across the United States including four others from Georgia, to participate in the Washington Workshops in June at American University in Washington, D.C.
The opportunity is presented annually through the National Society of The Colonial Dames of America, Georgia Society (NSCDA-GA), in cooperation with the Washington Workshops Foundation, and offered locally by the Americus Town Committee to high school students in grades 10 through 12. The students write on an assigned topic. This year’s was: “2016 Marks the 240th Anniversary of the Virginia Declaration of Rights Penned by George Mason of Gunston Hall; Why Does This Historic Document Remain Relevant Today?” As national winners, they were each awarded a $1,500 tuition scholarship provided by NSCDA-GA.
“It was a great educational experience,” said Hasnain, 17. “I learned a lot about how our government works in a democracy, especially since I’m interested in majoring in political science in college, but attending the seminar and participating in the model Congress swayed my decision.”
Hasnain said the seminar included daily guest speakers from the legislative branch, federal government, and the media, as well as touring the major sites of the nation’s capital.
“The highlight for me though was the model Congress we all participated in because it showed the true simulation of a how an actual Congressional bill is created and passed,” said Hasnain.
Explaining the model Congress, he said the students were divided into three committees to create a different bill regarding a current political issue. His committee worked on the opiate epidemic. The other committees developed bills regarding the Puerto Rican debt crisis and climate change. They heard from speakers knowledgeable about each of the issues and on the final day, a spokesman from each group had 30 minutes to present their bill; each one passed.
Hasnain said other high points were touring the U.S. Capitol building which was packed the day they were there because of the Democratic sit-in on gun control.
“We tried to get into the galleries and actually see the proceedings, but it was filled; however, we witnessed the press conference on the Capitol steps, which was very exciting,” said Hasnain.
In addition, the students toured the Supreme Court Building and learned more about the workings of the high court; visiting Arlington National Cemetery where they saw the changing of the guard ceremony at the Tomb of the Unknown Soldier and two of the students from their group laid a wreath. Other tours included Mount Vernon, and hearing more about the legacy of George Washington; a tour of Dumbarton House, national headquarters of the NSCDA, and learning more about the organization and its partnership with the Washington Workshops. While at Dumbarton, they participated in a scavenger hunt. They also toured Gunston Hall, home of George Mason in nearby Gooseneck, Virginia.
“Gunston Hall was especially interesting because Mason’s document was the topic of our essay,” Hasnain said.
Hasnain said the entire experience was a valuable educational experience.
“I gained so much knowledge of how our political system works and I’m looking forward to watching the Republican and Democratic national conventions in a few weeks,” he said.
He expressed appreciation to his Southland teacher, Susan Welch, for offering her students the opportunity to write the essay and to the Americus Town Committee, NSCDA-GA, and the sponsoring organization.
A resident of Americus for the past five years, he is the son of Bagar and Yasmin Hasnain.

By JONI WOOLF www.americustimesrecorder.com AMERICUS — Back in the 1960s, long before many of our readers were born, a husband-wife... read more