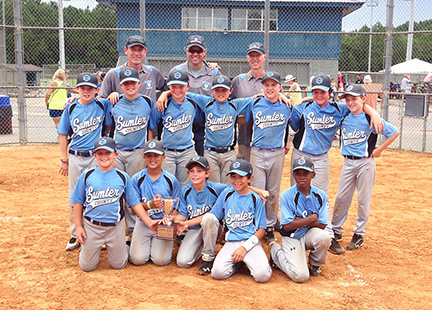 TIFTON – The Sumter County Parks and Recreation Department’s (SCPRD) 10-and-under (10U) All-star baseball team recently completed a very successful season by earning a third-place finish in the Georgia Parks and Recreation state tournament.
The team was formed on June 25 through a voting process by the regular-season coaches, who selected the top 12 players from their regular-season teams.
Prior to the District tournament, the selected players scrimmaged several teams from this area and also played in a tournament held in Eastman on the weekend of June 11.
The District tournament was held June 25-30 at E.B. Hamilton Park in Tifton. The Sumter team started strong with a 19-0 no-hit shutout of Crisp County. The Sumter County team continued its winning ways with another no-hitter, taking down Grady County by a score of 14-0. In the final-four matchup, Sumter County faced Thomasville YMCA and again tasted victory by the score of 9-2, which advanced the local team into the district championship. Thomasville survived an elimination game and, on June 30, faced the Sumter team in the finals but were overmatched once again by the SCPRD crew by a 15-0 margin, making the Sumter team the District Three champions and advancing them to the state tournament.
The GRPA State Tournament was held July 12-16 and was, once again, held in Tifton. Sumter continued its onslaught with a 4-2 victory in the opening game over the Savannah Ravens. Next up was a tough Dublin-Laurens team that gave Sumter County a good match, though the Sumter team once again pulled it out to earn a winning score of 7-5.
In their third contest, the SCPRD players finally met their match, facing the eventual state champions, Savannah Hot Rods. The local team fell 18-3 in a game where the bats cooled and the team’s defense seemingly fell apart, according to a statement from SCPRD 10U coach, Jason Griffin. With their backs against the wall, the Sumter All-stars won two elimination games by defeating the Clayton County Pirates 9-3, followed by a final-four matchup with Calhoun County which the SCPRD team won by a margin of 12-7.
The SCPRD’s participation in the tourney came to an end with a 14-2 loss to eventual state runner up, Burke County.
“We had a great group of kids this year,” said Griffin in a press release. “The boys worked really hard, did everything we asked of them, and I believe they had a lot of fun doing it. We are really proud of how well they played together and how they conducted themselves in representing their families and our community both on and off the field. Overall, it was a very rewarding experience and an honor and privilege to get to represent Sumter County on the baseball field this summer.”

From the Archives: Taking a journey through the AHS Pantherettes’ historic 1966 basketball season; part eight