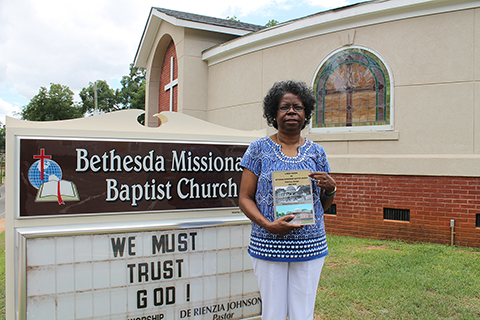 Shirley Latimore, a lifelong member of historic Bethesda Missionary Baptist Church, is shown with her book, a compilation of the history of the church, now in its 150th year.

AMERICUS — Bethesda Mssionary Baptist Church is seven months into celebrating its 150th anniversary. Shirley Houser Larimore, Ed.D., a lifetime member, has recently written a brief history of the first black Baptist church in the Americus area and it is fresh off the press!
“This book is not about me,” Latimore said, explaining the compiled history of the church located at 225 Forrest St., a church Latimore truly began to love as a child and continues to admire as an adult. She describes the church as a beacon pointing the way to Christ.
According to Latimore, she is the fourth generation of Harris, Cherry and Boone families who have been devoted members since the church’s origins.
“I love research and I noticed there wasn’t any compiled written history of the church,” Latimore said, describing the missing parts of information which had only been discussed by many.
With time on her hands since her retirement, Latimore set out on an adventure with her objective being to explore, research, investigate and organize a book which could possibly offer the community a written history of her beloved church.
The compiled history consists of 11 chapters of informative material. There is also an array of vintage photographs of church members and aerial maps of the church and its surroundings. The five chapters discussed the first 50 years, the heritage of the church’s beginnings after the Civil War and how its construction was initiated and organized by the Rev. George Cooper, a white man who served as a physician in Sumter County and also served as minister of First Baptist Church at the time.
According to Latimore’s brief history, a black Baptist church did not exist in the city of Americus. Blacks attended the white’s First Baptist Church. However, the congregation multiplied so rapidly, there was a need for a black church and Cooper was the organizer of purchasing and constructing the church which would be located on the backside of the property of First Baptist Church located in the area of Church and Forrest streets. After the property was purchased, the pioneers of the church started out on a journey which built a strong congregation that continues to this day to spread the gospel.
The latter part of the book features ministers throughout the years, including the longest serving minister, the Rev. R.L Freeman who was the 27th minister, and served for 43 years.
Many chapters focus on construction of the building over the years, major events and the prominent trailblazers, missionary work and members of the congregation responsible for the growth and development of the church.
Last but not least, the book also offers an array of black and white and color photos of the church’s construction, artifacts, ministers, deacons, trustees, musicians, choir, missionary work and members of the congregation, which make up the historial woven highlights of events that make Bethesda the ministry it is today.
Latimore explained that although there had been historical documentation up to 1948, compiled by Barbara Battle, there was missing or misplace information about the church’s history.
“There was a wealth of information,” Latimore said.
“If something was not compiled, our history would have been lost,” she said, explaining how many church members had passed away over the years.
Latimore said she retrieved her documentation from archives, libraries, newspapers, old records, oral recollections, members of the congregation and friends, hoping to create a record of the church’s history that would become informative and inspiring for generations to come.
“I know the Lord put it on my heart to do this,” said Latimore, explaining that it wasn’t an easy task; however, it was enjoyable to find so many treasures of the past and people along the way who helped her to accomplish her goal.
She said throughout the three years of research, she could hear her mother’s inspiring words whispering to her as she reflected on her early childhood years.
“My mother was a teacher, mostly known for her teaching in Plains at Westside Elementary. I would always help her decorate her classroom,” Latimore said, talking fondly of her mother Doris Houser. “She would always say there is no such word as can’t and then she would refer to the ‘The Little Engine that Could’ and she would say, ‘I think I can, I think I can, I know I can’,” Latimore said, adding that her mother always served as an educated, spiritual, motivational force encouraging her to set goals and follow through with those goals.
Shirley Houser Latimore resides in Americus with her husband, Deacon Mark Latimore Jr., Ph. D., and they have two children, Elisha Latimore and Mark Latimore III, and five grandchildren.
For more information call Shirley Latimore at 229- 928- 2645. Bethesda will continue to celebrate its 150th anniversary through Aug. 28. For more information about the events contact Bethesda Missionary Baptist Church at 229-924-2382, or mail bethesdambc@att.net

AMERICUS — The 15 young black girls, incarcerated in 1963, known as the Leesburg Stockade Girls, now have the opportunity... read more