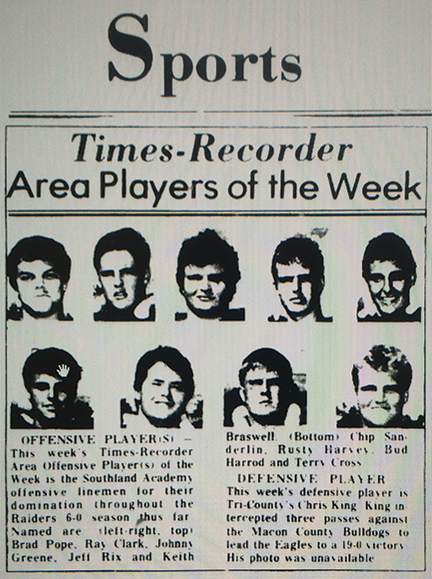 ATR File Photo: The members of the Raiders’ offensive line were named the Times-Recorder’s Offensive Players of the week in the ATR’s Oct. 6, 1986 edition. The cutline for the photo reads as follows: OFFENSIVE PLAYERS – This week’s Times-Recorder Offensive Players of the Week is the Southland Academy offensive linemen for their domination throughout the Raiders’ 6-0 season thus far. Named are (left-right, top) Brad Pope, Ray Clark, Johnny Greene, Jeff Rix, and Keith Braswell. (Bottom) Chip Sanderlin, Rusty Harvey, Bud Harrod, and Terry Cross.

From the Archives: Taking a journey through the Southland Raiders’ historic 1986 football season; part 4

Editor’s note: We, at the Americus Times-Recorder, enjoy celebrating our area’s history of athletic excellence. Most recently, we have embarked on a journey into the past to detail the thirtieth anniversary of the Southland Academy Raiders’ awesome 1986 football season. While poring through our archives of old editions from the period, we have uncovered a wealth of knowledge about that epic football season, in which the Raiders plowed their way past competitor after competitor en route to the school’s very first football state championship victory.
While exploring the archives, I have found that the microfilms, on which many of the editions from the mid-1980’s were reproduced, has begun to deteriorate. Unfortunately, that means that I cannot go into the amount of detail that I would like to in retelling the stories of some of the Raiders’ exciting victories. Though this will likely be a disappointment to some fans, I can assure you that I will make every effort to provide as much information as possible as the series progresses.
In our latest installment, we discussed the Raiders’ exciting 38-6 victory over the Westwood Wildcats. Following their fifth win of the season, the Raiders and their coaching staff dutifully continued their training in anticipation of the following week’s match-up against Monroe Academy. 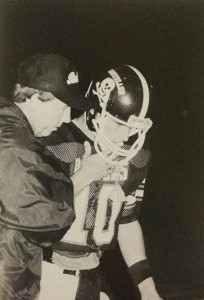 From Southlannd Academy 1987 yearbook:
Raider head coach, Loveard McMichael, takes a moment to confer with Southland quarterback, Stephen Summers, during a break in the action during a 1986 contest.

———————————
In early October 1986, the eyes of the world were on Nicaragua, a country ruled by the Sandinista regime that had recently captured an American pilot, Eugene Hasenfus, who was alleged to be attempting to deliver supplies to the country’s Contra rebels. At the same time, then U.S. President, Ronald Reagan, was preparing to meet with Mikhail Gorbachev of the former USSR to discuss restrictions on armaments during the Cold War. In local news, the Sumter County Sheriff was investigating a stabbing that had recently occurred off of Highway 27 as well as the recent drowning of a Leslie resident in Fort Valley.
With all of this commotion going on globally as well as locally, ATR readers would often turn to the sports page for a reprieve from these heavy-handed events.
The ATR’s sports page certainly didn’t disappoint local fans. Like clockwork, the section would be released daily, chock full of good news about area athletics. Among these articles, the most prominent series was most certainly the saga of the Raiders’ rise to prominence.
———————————
With the Southland squad still feeling the rush of victory following their most recent win over Westwood, ATR sports editor, Ron Evans, published a preview of the team’s upcoming tilt against Monroe Academy titled, Southland readies for Monroe Academy”.
A portion of this article is shared below:
Southland readies for Monroe Academy

By MICHAEL MURRAY michael.murray@americustimesrecorder.com ELLAVILLE –  The Schley County Wildcats pulled the curtain on their 2016 football season with a... read more