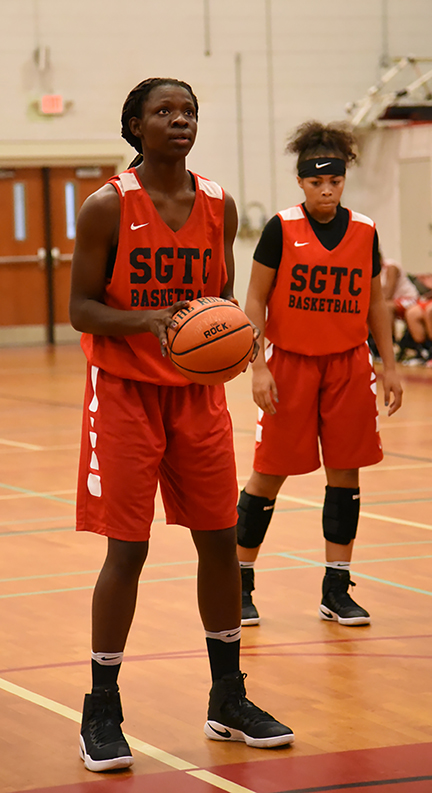 Submitted by South Georgia Technical College: SGTC’s Esther Adenike is shown above getting ready to shoot a freethrow with her teammate Camille Coleman shown in the background at the Darton Jamboree.

ALBANY – The South Georgia Technical College (SGTC) Lady Jets performed well in the Southeast JUCO Jamboree at Darton College recently on the weekend of Oct. 15-16. This was one of the largest JUCO preseason events.
The Lady Jets opened the Jamboree with a win over Northeast Florida, but then dropped back to back losses to Shelton State and East Mississippi Community College before rebounding to defeat Central Florida and finish the jamboree 2-2.
Over 30 top junior college women’s basketball teams attended the Southeast JUCO Jamboree. Three of the top National Junior College Athletic Association teams – Gulf Coast, Shelton State and Northwest Florida were all present. South Georgia Tech faced two of those three teams and split the decisions with a 1-1 record.
“This was a good learning experience for us,” said SGTC Athletic Director and Lady Jets head basketball coach, James Frey. “We have only one player returning from last season so this gave us a chance to see how well we work together in a game situation against some good competition. I was pleased with our performance, but it also showed me what we need to work on before the season opens on November 1st.”
A number of Lady Jets were scouted by Division I head coaches at the event. Camille Coleman, Houlfat Mahouchiza, returning guard La’Deja James, Desiree Corbin, Esther Adenike, and Shaineequah Fluellyn were all mentioned in the scouting report for their play.
James, a sophomore point guard from Virginia Beach, VA, is the only returning player for the Lady Jets this season. She was described as an “athletic finisher that excels in the up-tempo game.”
Three of the other Lady Jets mentioned included transfers: two from Darton college and one from South Bend, IN. Corbin, a 6’2” post transfer from Darton, drew some attention and was described as probably “one of the highest recruited post players this year. She finishes around the basket but could be more consistent.”
Another Darton transfer, Fluellyn, a 5’7” shooting guard, was listed as “a solid framed guard, fast with the ball and a good handler.” The final Lady Jets transfer, Coleman, a 5’8” sophomore shooting guard from South Bend, IN, drew praise as a “smooth shooting guard who understands how to create her own shot or create for others while remaining under control. She makes good decisions in transition and has a nice jump shot.”
The other two Lady Jets mentioned in the scouting report were international players who will be playing as freshmen. These players are Mahouchiza, a 6’1” power forward from Nice, France; and Adenike, a 6’2” power forward from Lagos, Nigera. Mahouchiza was described as a “long inside/outside player with guard skills. Finishes offensive rebound put-backs. Has a huge upside, good mid-range game and [is] a nice interior passer. One of the top breakout players at the event.”
The other international player, Adenick, was spotlighted as a “raw athlete.”
Frey said that the Lady Jets had the opportunity to work on some things before they hosted Columbus State University in a scrimmage on Oct.22. in the Hanger in Americus. They will have one more home scrimmage on Oct. 26 at 6:00 p.m. against Albany State University before the regular season starts on November 1 with a doubleheader. The Lady Jets open against Chattahoochee Valley Community College at 6:00 p.m. on Nov 1. The Jets will also open that night at home at 8:00 p.m. with a game against New Rock Prep.

Panthers look to ride momentum of wins over Hardaway, Shaw into match-up with Carver

By MICHAEL MURRAY AMERICUS – After pulling in an exciting victory over the Hardaway Hawks on Oct. 21, the Americus-Sumter... read more