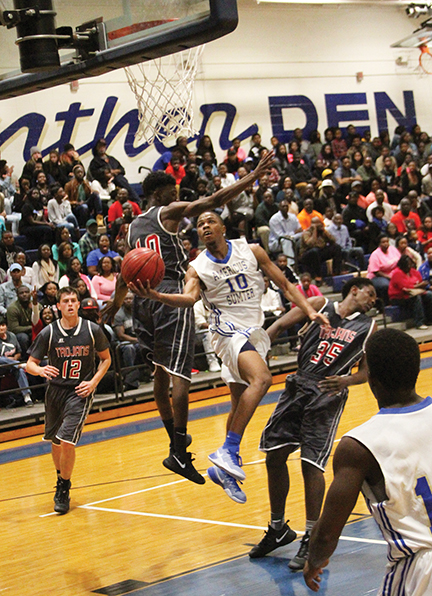 Michael Murray I ATR: ASHS’ Karmil Hamilton gets his opponent in the air and goes for an under-handed lay-up during the fourth quarter of the Panthers’ Nov. 19 contest against Lee County in Americus.

AMERICUS – The Americus-Sumter High School Panthers and Lady Panthers basketball teams kicked off their 2016 home seasons over the weekend with a pair of exciting match-ups against Lee County at the Panther Den in Americus.
Following a heartbreaking loss to 2016 Class A state champions, the St. Francis Lady Knights in Alpharetta on Friday, the Lady Panthers hosted the Lee County Lady Trojans on Nov. 19. The ASHS Ladies roared back from an early deficit in the contest to snag a 53-27 victory in before the Panthers took the court to battle the Trojans. In the evening’s nightcap, the Panthers fought hard in an up-and-down match, finally rallying in the fourth quarter to earn a substantial victory of their own, 56-45.
The defending state champion Lady Panthers got off to an uncharacteristically slow start in the afternoon’s opener, allowing their Class AAAAAA Lee County Counterparts 15 points in the initial frame while scoring only 11 of their own. By the midpoint of the second quarter, the ASHS ladies had clawed their way back into contention and tied the score 17-17.
With just over three minutes left in the half, ASHS senior, Timia Swanson, nailed a free throw to put the home team ahead and Dekeyvia Blackshear added three more moments later to give ASHS a four-point advantage. The Lady Trojans wouldn’t stay down for long, however, and they soon followed with four shots from the charity stripe to tie the score 21-21.
Swanson added two more free shots before Shidajah Johnson broke away for a fast break lay-up, leaving the Lady Panthers up 25-21 in the final seconds of the first half. To cap off the second frame, Zari Mays laid up a Jykiera Long-assisted goal just before the buzzer and the Lady Panthers hit the locker room with a six-point lead for the intermission. 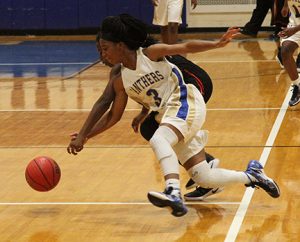 Michael Murray I ATR:
ASHS’ Jykiera Long scrambles for a loose ball alongside a Lee County opponent during the Lady Panthers’ Nov. 19 tilt against the Lady Trojans.

There’s no way of knowing what Lady Panther head coach, Sherri Harris, said to the ASHS girls during the half-time break but, whatever it was, it certainly got the team motivated.
The home team returned to the court with a vengeance and managed to outscore their opponents 13-2 in the third quarter and 13-4 in the final frame to walk away with a runaway 53-27 victory at the final buzzer.
Swanson set the bar high in the team’s impressive comeback run, tossing in eight points and contributing one steal in the second half. Mays and Tykiera Long each contributed five points in the second half, aided by J. Long’s four steals and three assists. Johnson tossed in four points in the third and fourth stanzas while DeAsia Ford added one assist and two points. Blackshear blocked one shot for the Lady Panthers and newcomer to the team, Amber Stewart, added an assist in the second half.
Following the Lady Panthers’ epic comeback, the Panthers hit the court to wrap up the evening’s action with a bang.
ASHS’ Kiante Sims jumped for the tip-off and launched the ball to Jurrell Jones, who opened the scoring seven seconds in with a free throw. The Trojans immediately added a field goal to take the lead and ASHS promptly returned the favor when Sims dropped in a Jones-assisted lay-up.
Lee county sharpshooter, TJ Harris, who would prove to be the thorn in the Panthers’ side for the duration of the game, followed with a pair of jumpers to give the visitors a three-point edge at the 4:20 mark before Jones converted a rebound. Sha’quel White followed with a jumper, assisted by Malik Jackson. The Panthers continued to guard their lead for the remainder of the initial frame, taking a 10-8 advantage into the second quarter.
The Trojans immediately tied the score in the opening seconds of the second quarter and the teams battled through another tie, at 12-12 less than two minutes later. The foes traded blows over the next five minutes and the Panthers took a 21-19 lead into the second half.
The third quarter was highlighted by energized play from both teams, including a Stephon Luster-assisted dunk by Sims that sparked a roar of approval from the home crowd. The Panthers and Trojans duked it out for the full eight minutes, with each team stubbornly refusing to give their opponent even the slightest edge.
Though the Panthers pulled ahead by as many as nine points in the third stanza, the Trojans would not relent and the home team clung tightly to a two-point lead (38-36) entering the final quarter.
The final frame yielded even more invigorating play as the blue and gold ASHS fans cheered their team on from the stands. After Lee County upped the ante in the opening seconds of the fourth quarter and took a 41-38 lead, the Panthers immediately staged their comeback and began to pull away.
ASHS’ Karmil Hamilton kept the local fans clapping with an under-handed lay-up to bring the Panthers within one moments before Sims converted a rebound, giving the home team a lead that they would keep for the rest of the tilt.
In the final seconds of the match, the Panthers put the game away with a flourish when Luster tossed up an alley-oop setup that Sims deftly stuffed into the basket just before the buzzer, earning the Panthers the 56-45 win.
Sims set the pace for the ASHS victory, falling just short of a double-double with 20 points and nine rebounds. Sims also contributed one assist and one steal for the Panther cause in the contest.
Jones followed close behind with 16 points in the match, also adding four rebounds, four steals, one block, and one assist.
White tossed in six points and contributed one block while Jackson and Luster each recorded four points, one assist, and one steal. Josh Lusane, Eric Hall, and Hamilton each contributed points to the win as well.
Following their Thanksgiving Break, the Panthers and Lady Panthers will be giving their Lee County Rivals the chance to even the score when the teams travel to Leesburg on Dec. 3. The ASHS teams will open Region 1-AAAA competition on Dec. 6, traveling to Columbus to battle the Columbus High School Blue Devils and Lady Blue Devils. They will return to the Panther Den in Americus on Dec. 9 to continue non-conference action against long-time rivals, the Crisp County Cougars and Lady Cougars.