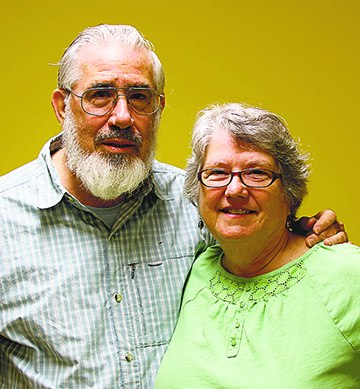 Holidays especially difficult for the hungry

AMERICUS — As families across the country enter their third day of the Thanksgiving turkey, and other leftovers, there are still many people who have nothing left because they had nothing on Thursday, despite the efforts of many ministries feeding the needy on Thanksgiving. Holidays are particularly difficult on those who struggle financially, and are often met with an empty cupboard, and empty stomach.
But thanks to the Harvest of Hope Food Pantry in Americus, there are fewer hungry people in Sumter County than there had been.
The ministry, founded in 2013, is run by Sonny and Ginger Pinckard. They chose to retire — he was a Methodist minister and she worked in the insurance field — to Americus to be near their son and his family. But retire they did not. They now work almost every day at the food pantry. And it’s all unpaid, a labors of love.
Harvest of Hope provides food every month to about 750 people; that translates into families since some of the households include adults and children. While the numbers vacillate, the need never ends. With a cadre of loyal, dedicated volunteers from the community — ranging from Ph.D.s to retired educators to homemakers and others — the Pinckards keep the machine running smoothly. The clients come for food distribution on a rotating cycle.
Every 28 days, two bags are packed in advance for those who are signed up to receive the free food. The items include basics such as bread, peanut butter, beans, pasta or rice, cans of spaghetti or ravioli, canned fruits/vegetables, all main staples, along with something sweet. Since the food pantry acquired freezers, fresh meat and chicken are often available, as well as frozen vegetables.
Minor Farms, a major agricultural operation in the area, gives freely of green beans and squash and other row crops during the summer months. They even bring in trailers of watermelons during the season. Right now, the Minors are donating cabbage, which can complement a food budget with soup makings. The Hagersons, another local farming operation, is currently donating sweet potatoes, one of the most nutritious foods.

Harvest of Hope recognized its benefactors at a breakfast, presenting each with a Full Plate plaque.

Sonny said that often the bags are so full that people who have walked or bicycled to the pantry on McGarrah Street can barely handle them, but handle them they must. He explained that many of their clientele are attempting to feed their children and/or themselves from multiple food sources, and the Harvest of Hope packages are vital to the success of their goal.
“Most people do appreciate it,” Ginger commented. “About 90 to 95 percent are thankful for it.” Some do not even say thank you, she said. There are even some who actually complain about the free food they receive, but they are few. The clientele qualifies by USDA guidelines.
Private donations fund the Harvest of Hope food pantry along with food drives by various local groups. The local schools have been collecting food for Harvest of Hope. Also, many local churches support the food pantry as part of their community outreach. Food Lion in Americus is another huge benefactor. Every day, the Pinckards go to the local grocery store and pick up a wealth of food items donated by the store. Michael Waters is manager of the Americus Food Lion. Many locals shop at Food Lion because of their giving nature.
Harvest of Hope, a nonprofit, operates under the auspices of the USDA, and has strict guidelines about storage, handling, etc.
Now, during the period between Thanksgiving and Christmas, there is an even greater need for food. Sonny said that’s why Harvest of Hope distributes its December packages as close to Christmas as possible, so the people receiving it will still have something by the time Dec. 25 rolls around. The volunteers will package the food on Dec. 19, to be distributed on Dec. 20 and 21. As always, every package includes a Bible verse or prayer, being that Harvest of Hope is a food ministry.
“This has been a real learning experience,” Ginger said of their work at the food pantry. While Sonny is executive director, Ginger serves on the board of directors. They are unpaid, just as the other board members and volunteers are unpaid. They give from their hearts.
The Pinckards have many, many stories about the people who come to Harvest of Hope, some incredible sad, others uplifting. Sonny told of a woman who drove up in front of the food pantry, parked her car and came inside, asking if they accepted food donations. They said of course. After helping the woman to upload the food from her car, she told him that she had been a recipient of food from the pantry at one time when she was going through a rough patch, and because of the dignity and respect she was met with, she wanted to return the favor.
So while you’re wondering what to do with your leftover Thanksgiving turkey, don’t forget those who didn’t have one and might not have one at Christmas either. Food and monetary donations are needed and can be dropped off at 606 McGarrah St., Americus. Monetary gifts can also be mailed to Harvest of Hope Food Pantry, P.O. Box 6111, Americus GA 31709. And of course, volunteers are welcome.

AMERICUS — With a new high school in their future, a unified Sumter County School Board set out to express... read more