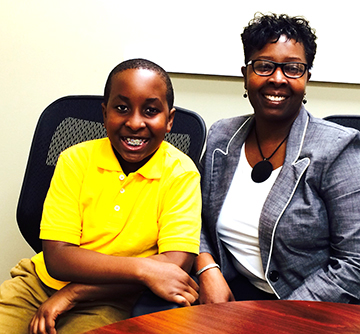 Kaylon Harvey and his mom Pam Harvey in the Americus Times-Recorder’s conference room.

Local 10-year-old makes it to Hollywood

AMERICUS — It’s not far from here to Hollywood for a 10-year-old from Americus. His dreams are made of moist cakes with fluffy frosting, imaginatively decorated cupcakes, cookies, pies, and other sweet concoctions, that are taking him to big places, like Los Angeles. 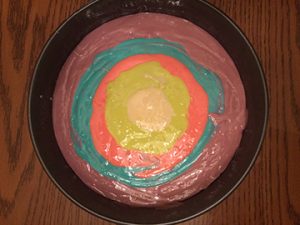 Kaylon Harvey is a star, whether he wins in his competition or not. He has that je ne sais quoi that charms all who come in contact with him.
Kaylon, son of Pam Harvey and Robert Harvey, will appear on the Food Network’s “Kids’ Sweets Showdown” airing at 8 p.m. tonight, Nov. 30. That channel is 62 or 858 on Mediacom. 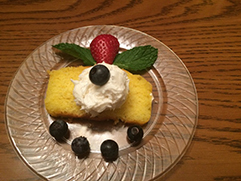 Kaylon demonstrates his artistic skills in plating food he has made.

A fifth-grader at Quitman County Elementary School (where his mom works) in Georgetown, he agreed to an interview with the Times-Recorder.
A polite young man, at first he was somewhat reticent in his answers to questions, responding “yes” or “no.” But as he warmed to a subject dear to his heart, the art of baking, his eyes danced and his smile widened, and one could tell he knows of what he speaks. Who would expect a 10-year-old to use words like “spring form pan”? 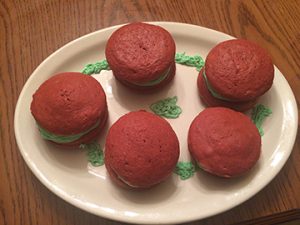 Pam said Kaylon always liked to spend time with her in the kitchen. She related a cute story of when he was only a toddler and she put in his crib for a nap while she cooked in the kitchen.
“He cried and cried,” she said, “and his crying kept getting closer and closer. He was right behind me in the kitchen!” She said she doesn’t know how he managed to get out of the crib without hurting himself, but he did.
Perhaps that was an early indicator of Kaylon’s drive. He is quite an ambitious youngster . When asked if he wants to be chef when he grows up, he responded, “I was want to be a millionaire.” Celebrity chef? Who knows? He could someday join the ranks of Emeril Lagasse and Bobby Flay and become a billionaire!
Pam said, “You could create your own line of desserts, and people would be calling out ‘Kaylon’s Cakes! Kaylon’s Cakes!’ ” This makes her son’s eyes dance. 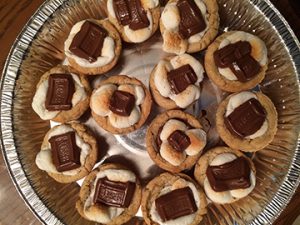 Kaylon said he has “always” loved to cook and learned from his mother and grandmother, by  watching and asking questions. The kid is well organized. His mother said he will mention around midweek that he wants to bake the next weekend, and tells her what he wants to make so she can make sure he will have all the necessary ingredients.
When asked if he cooks for special occasions such as birthdays and holidays, Kaylon said yes, “but not weddings.” His mom quickly said he a “big goal” of his is to make a big wedding cake, and his aunt has said he will definitely get to make her wedding cake when the time comes.
Kaylon said he enjoys making the cakes as well as decorating them. His proud mother shows photos on her smartphone of cakes he has done such as a Tie-Dye Cake for which the junior chef mixed different food dyes into the batter. Other photos are of his s’more cups, and other mouth-watering sweet concoctions.
So why does Kaylon like to bake? What does he take away from the activity?
“I like it because it soothes your mind,” he said. A pearl of wisdom from a child. The word “precocious” comes to mind.
Kaylon’s friends had not seemed to be curious about his hobby until he made it to Hollywood in late August where the show was taped over a period of a week and a half. But since then, they are very interested, Pam said. Kaylon did mention that while none of his friends seem interested in cooking, he had a friend over to his home once and they made mini cupcakes and decorated them however they wished.
He has made cupcakes for his classmates which were well received. “They loved them,” he said. His teacher liked them, too, and told him she plans to bring her oven to school so they can make brownies.
Although Kaylon and his mother already know the outcome of the Food Network competition, they are sworn to secrecy, having signed a confidentiality agreement. On tonight’s show, there will be eight contestants, four boys and four girls. Kaylon said there is another young chef, a girld, from Georgia, from Atlanta. He said he enjoyed meeting others his age who also love to cook, and he made some new friends.
He said he enjoys watching the Food Network and one day, while watching with his mom, she suggested he enter into competition. 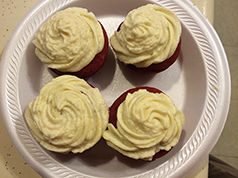 “I sent a really nice picture of him,” Pam said, “with his suit and bowtie, and they said that picture just won them over. And every time they talked to him on the phone, they were just so impressed with his personality,” and his manners.
Such a self-possessed young man, however, is still a child. When asked if he had seen any movie stars’ homes in Hollywood, he said “Yes, Beyonce’s,” with a big grin.
What does Kaylon like to do besides cooking? “Nothing,” he said, but he does like school, too,  and makes good grades.
Already, Kaylon Harvey is looking ahead to the holidays. He plans to make a spice cake for his mother at Christmas.
Kaylon has a collection of cookbooks and uses his computer savvy to explore recipes on the Internet. He is also “very experimental,” as Pam said. He said he likes to make up recipes on his own for cakes and cookies.
Well on his way already at such a young age, Kaylon shares his philosophy with others kids. “Never give up on your dreams,” he said.

Holidays especially difficult for the hungry

By BETH ALSTON beth.alston@americustimesrecorder.com AMERICUS — As families across the country enter their third day of the Thanksgiving turkey, and... read more