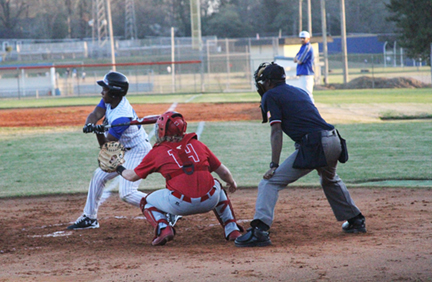 MICHAEL MURRAY I ATR: ASHS’ Christian Mable winds up to hit a fastball during an early-season contest in Americus. Mable crossed home plate four times to contribute to the Panthers’ March 10 victory over the Carver High School Tigers. Mable also contributed one stolen base to the ASHS win.

COLUMBUS – The Americus-Sumter High School Panthers exploded in the ninth inning of the team’s March 10 road test against the Carver Tigers in Columbus to tack on nine late runs and earn a 12-8 victory over their hosts.
The Region 1-AAAA victory marks the Panthers’ first of the season after six match-ups.
The Panthers opened the game with one run in the top of the first before Carver answered in the bottom of the frame with three runs. ASHS added another in the top of the second and the Tigers continued to pull away by plating three runners in the bottom of the third.
The Panthers tacked on their third run in the top of the fourth inning before Carver brought in one more in the bottom of the fifth.
The Panthers returned to the dugout in the top of the sixth inning with a vengeance and sparked a rally that netted the team nine runs and, eventually, the four-point region win.
Brandon Alford and Joshua Lusane led the Panthers from the batter’s box with two hits apiece.
Christian Mable managed to draw a trio of walks in the tilt but made the best of his situation, crossing the plate four times during the match. Mable was followed by Kendall Butler, Braelin Williams, and TJ Rush, who each coaxed one walk out of Carver’s pitcher.
Butler led the team in RBIs, with three while Alford brought in two runners. Devin Hudson, Anthony Bowens, and Lusane each batted in one.
TJ Rush stole two bases in the match while Mable nabbed one.
Butler did six innings’ worth of work on the hill for the Panthers, striking out three batters along the way before ceding the mound to Alford, who wrapped up the game. Alford struck out one batter in the final inning.
In total, the Panthers collected eight hits in the game while giving up only six. Seven of the Tigers’ runs were earned.
The Panthers will continue Region 1-AAAA action on March 16, hosting the Cairo Syrupmakers at 5:00 p.m. The following afternoon, the Panthers will face the Columbus High Blue Devils at 5:30 p.m. in Americus.