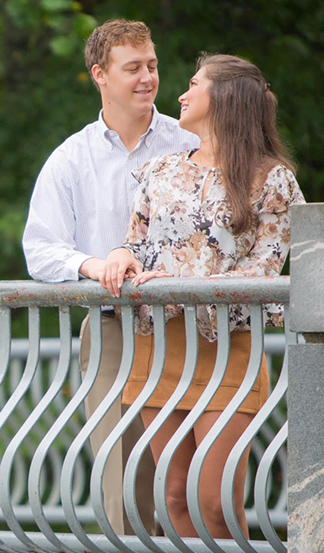 Dr. and Mrs. Henry St. George Teaford Jr.  Americus, Ga., and Dr. Dmitri Reznikov of Seratov, Russia, announce the engagement of their daughter, Anastassia Reznikova of Atlanta, Ga., to James Buchanan Horton Jr. of Atlanta, Ga., son of Mr. and Mrs. James Buchanan Horton Jr. of Cumming, Ga.
The bride-elect is the granddaughter of Mr. and Mrs. Otari Tsagareli, and Dr. and Mrs. Ovis Reznikov all of Seratov, Russia.
She is a 2011 graduate of Southland Academy, Americus, and received a bachelor of science in biology and psychology from the University of Georgia, Athens in 2015. She’s a member of Tri Delta sorority. She is currently a software enterprise trainer for Noble Systems Corporation in Dunwoody. The bridegroom-elect is the grandson of Mr. Dwight Horton Sr. of Westminster, SC., Mrs. Buchanan Horton of Atlanta , Ga., and Mrs. and Mrs. William Julius Hartramph of Canton, Ga. The future groom is a 2011 graduate of Blessed Trinity Catholic High School in Roswell, and attended the University of North Georgia in Athens. He is a member of Kappa Phi fraternity. He is employed as a sourcing specialist for The Beam Team in Alpharetta.The wedding is planned for 2 p.m. April 29, 2017, at the Cathedral of Christ the King, Atlanta.

Brad and Cindy Hagerson of Plains announce the birth of their second son, Gray Fielding Hagerson, on Jan.19, 2017, at... read more