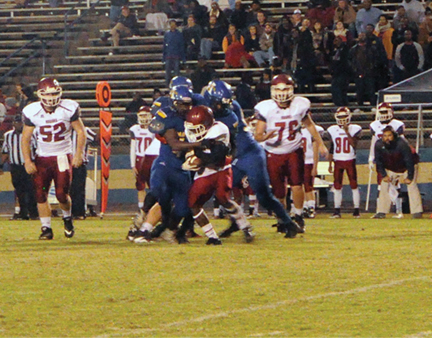 NICHOLE BUCHANAN I ATR: A pair of ASHS defenders wrap up a Huskie rusher during the Panthers’ Nov. 10 playoff tilt against Howard High School in Americus.

AMERICUS – The Americus-Sumter High School (ASHS) Panthers kicked off the Class AAAA state playoffs on the evening of Nov. 10 at Finklea-Robinson Field.
The Class 1-AAAA Panthers hosted the Howard High School Huskies, of Macon, earning a 27-14 defeat over the visitors. With the win, the Panthers improve their overall record to 9-2 on the 2017 season.
The Panthers earned the right to advance to the next round of the playoffs next week. They will be facing the Thomson Bulldogs. A coin toss will decide which team will have the home field advantage.
The Panthers took the opening kickoff and put the ball in the hands of the young man who played a big part in getting them to playoffs… Kobe Lewis. A couple of first down gashes by Lewis led him to being placed in the wildcat formation. Once he took the snap, he made reservations for six as he marched into the end zone giving Americus Sumter an early 6-0 lead after the PAT was blocked.
After holding the Huskies to three and out, Lewis continued pounding the rock for the Panthers. Lewis then exploded up the middle after taking a handoff, only to barely be tripped up on the ASHS 43-yard line. On the very next play, Lewis took the handoff to the left side, but used his vision to cut cross-field for a big gain and put the Panthers in scoring position.
A couple plays later, Lewis ripped a big run up the middle to find the end zone for the second time of the half, extending the lead to 12-0 after the two-point conversion was unsuccessful.
Howard however, would not be outdone as junior quarterback, Quintan Sewell, showed his athleticism, avoiding avoided a sack to find sophomore running back, Jeremiah Kelly, in the flats. Kelly sprinted downfield into Panther territory. A penalty against the Panthers then pushed Howard into the red zone.
With their backs against the wall, the Panthers faced even more adversity after star cornerback, Jakhari White, went down with a leg injury to end his night.
The injury deflated the Panthers and momentum shifted to the Huskies’ passing game.
Sewell quickly rolled out to find Jarquavious Coleman for a touchdown pass, narrowing the gap to 12-7.
Frustration grew on the Americus sideline as drives begin to stall, and the ball movement slowed down as ASHS went into the half leading 12-7.
The frustrations ended out of the locker room for the Panthers as quarterback, Keirston Harvey, hooked up with receiver, Braelin Williams for a 72-yard bomb that led to six more points for Americus Sumter, making it a 20-7 ball game.
The Panthers tried to stretch the score even more on the next drive and, with another deep ball ending up in the Williams’ hands, it looked as if the Panthers might do just that. Three penalties for a total of 30 yards, however, pushed ASHS out of scoring position and forced a punt.
Late in the fourth quarter, ASHS head coach, Erik Soliday, put his wildcat heavy package in the game with AJ Payne as the quarterback. Payne took the snap and lowered his pads, bouncing off tackles before he finally sprung free to find the end zone, putting an exclamation point on the Panthers big first round win.