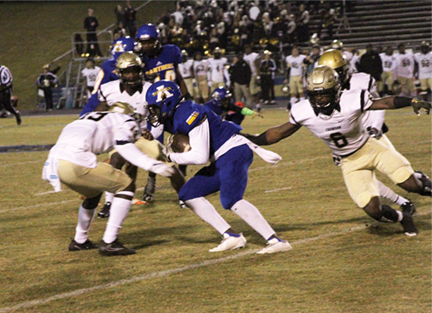 MICHAEL MURRAY I ATR: ASHS receiver, Lemario Larry, attempts to break away from a Thomson defender during the first quarter of the Panthers’ Nov. 17 playoff tilt against the Bulldogs in Americus.

AMERICUS – The Americus-Sumter High School (ASHS) Panthers put up quite a fight in the team’s second-round playoff appearance against the Thomson Bulldogs on Nov. 17 in Americus. The foes remained neck-and-neck throughout regulation play, forcing an overtime round to determine the victor.
In the end, the Bulldogs emerged victorious with a 36-35 advantage over the Panthers, bringing ASHS’ gridiron season to an end.
The Panthers completed their 2017 season with a 9-3 overall record. With the victory, the Bulldogs earn the right to advance in the playoffs with a record of 10-1.
The Panthers received the opening kickoff and a pass interference call against the Bulldogs gave Americus promise as the chains moved for the first time Friday night.
The drive stalled, however, resulting in an ASHS punt.
Thomson took over inside their twenty-five-yard line. A few plays later, Thomson’s Jacorey Crawford took a handoff and went 65 yards to put the first points on the board as the Bulldogs took a quick 7-0 lead.
Not to be outdone, ASHS answered on the very next possession as Kobe Lewis scampered untouched for his own 65 yard touchdown, tying the game at 7-7.
After a few three and outs by both teams, the ASHS defense came up with the first turnover of the night as senior cornerback, Jaquan Searcy, battled for a jump ball and returned control to the Panthers. Costly penalties pushed ASHS back and they were forced to punt.
The short punt gave Thomson great field position across the fifty. The Bulldogs then called on their star athlete and Auburn commit, Christian Tutt, who exploded up the middle, showing off his speed for another Bulldog touchdown. The first quarter ended with Thomson ahead 14-7.
The teams’ defenses begin to feel each other out as big stops were made, but none bigger in the first half then the two stops by ASHS senior linebackers, Mikal Douglas and Christian Mable. Both players made big tackles for loss, forcing a pair of three and outs.
Headed into the half, Americus returned the favor by calling on Lewis, who took a handoff to the right side before making a move on the future Auburn Tiger and leaving everyone else behind him as he took off for the end zone.
The score was tied 14-14 at the halftime break.
The second half excitement started from the first snap of the third quarter when Thomson junior running back, Bubba Murray, broke free into the secondary for another big touchdown gash, giving the momentum back to the Bulldogs alongside a 21-14 lead.
The Bulldogs forced a three and out and eat up the clock in the third quarter, pounding the ball with first down after first down until they reached the red zone. ASHS’ defense bowed its back and forced a fourth and inches from the twelve-yard line.
A strong push by the defensive line forced the turnover on downs, minimizing the damage for ASHS and keeping the score 21-14.
After a slow third quarter, the Panthers found life in the fourth period with their sure-handed senior receiver, Braelin Williams, who caught a big first down pass across the middle off of a dig route.
Once ASHS’ passing game got going, the offense started moving the ball as ASHS quarterback, Keirston Harvey, found Lewis on a swing route wide open out of the backfield. Lewis walked into the end zone, knotting the score 21-21.
Determined not to give up the advantage, Thomson senior quarterback, Mills Riding, soon found Marcus Cade wide open in the middle of the field for a big touchdown and gave the lead back to the Bulldogs, 28-21, midway through the fourth frame.
Williams kept the ASHS offense going with two big catches to move the chains on the very next Panther drive.
Facing a vital fourth and inches, the ace heavy package entered the game with AJ Payne as the wildcat quarterback. Payne took the handoff and plowed through defenders to give ASHS a fresh set of downs.
Two plays later, Harvey linked up with Williams on a corner route for a huge touchdown to tie the ball game 28-28 and send it to overtime.
The first play of overtime was a wildcat run by Thomson’s Tutt, who broke a tackle and walked into the end zone for his second rushing touchdown of the evening.
Down 35-28, Americus-Sumter responded by running the same play that gave them six points in the third quarter. Harvey found Lewis in the flats from the swing route to put him back in the end zone and narrow the gap to 35-34.
Only needing a PAT to tie the game and go into double overtime, the Panthers called on their place kicker to make the high-pressure shot. As the home fans watched with bated breath, the kick sailed wide, marking the end of the Panthers’ 2017 season.