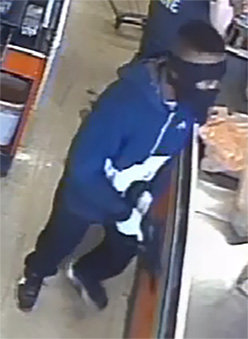 According to a press release from the Americus Police Department, officers of responded to Rubo’s Grocery on Adderton Street at approximately 2:45 p.m. Tuesday.
Employees of the store reported that a suspect entered the store through the front door brandishing a firearm and demanded money from the cashiers. The suspect fled the store on foot. He is described as a black male, 5’11” to 6’00” in height. He was last seen wearing a blue windbreaker with a horizontal white stripe, dark pants, and black and white tennis shoes. The suspect was wearing a mask over his face.
Anyone with information is asked to call the Americus Police Department at 229-924-3677 or after business hours at 229-937-9011.

AMERICUS — The Americus Police were called to a residence in the 1600 block of North Jackson Street shortly before... read more