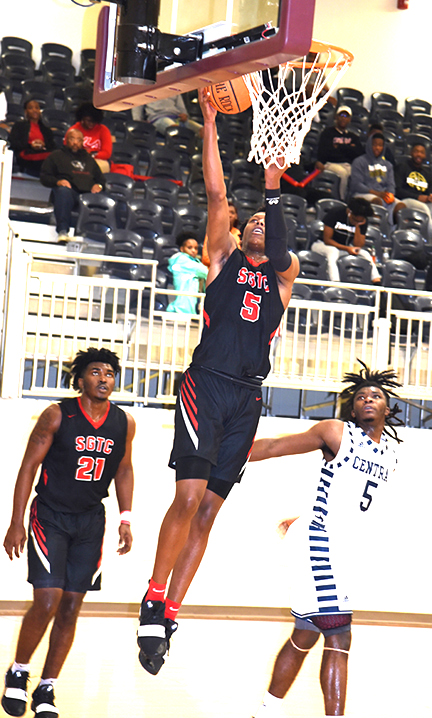 The Jets were riding a five-game GCAA winning streak, but fell short to EGSC by the score of 84-80 in the second half of the double-header.

Almost all of the Lady Jets played between 17 and 20 minutes in the contest, but only two players reached double-figures. Sophomore guard Alyssa Nieves led the team with 14 points. Kamya Hollingshed came off the bench to close out the double-digit scoring with 10 points.

The SGTC men’s team came into their game with EGSC riding a five-game winning streak, but lost 84-80. The Jets are now 9-13 overall and 5-3 in the GCAA. The Jets are also tied with Gordon College for fourth place in the conference standings.

Four members of the Jets’ squad scored in double-figures. Freshman Justin Johnson led SGTC in scoring with 21 points and Jaylan McKinney poured in 15. McKinney was 3 for 5 from beyond the arc. Brice Peaster scored 11 points and Adonis Green scored 10 points to close out the double-digit scoring.

Both the Jets and Lady Jets will host Central Georgia Technical College on Saturday, February 2, in a GCAA double-header. The Lady Jets will tip off at 1 p.m., followed by the Jets at 3 p.m.

By Staff Reports   AMERICUS – It was a perfect finish to a perfect evening at Southland Academy (SA) on... read more