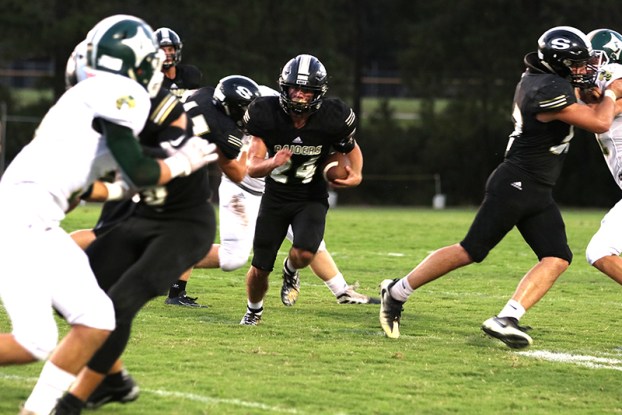 Southland Academy senior running back Clay Owens (24) earned All-State honors for the third year in a row and was named the GISA Region 3-AAA Player of the Year. ATR Archive

AMERICUS – Several Southland Academy (SA) football players played critical roles in leading the Raiders to a 7-5 record during the 2019 season and a Region Runner-Up finish. The Raiders also advanced to the second round of the Georgia Independent School Association (GISA) Class AAA State Playoffs before losing to John Milledge Academy 21-0. For their efforts, they have earned All-State, All-Region and Honorable mention honors.

For the third straight year, SA senior running back Clay Owens has earned All-State honors and was also voted the Region 3-AAA Player of the Year. During the 2019 season, Owens rushed for 1,416 yards on 192 carries and scored 22 rushing touchdowns to lead the Raiders’ offensive attack. Owens also had eight games last season in which he rushed for more than 100 yards. Owens also broke SA’s all-time rushing record and the school’s all-time record for all-purpose yards in the Raiders’ 47-14 home victory over Westfield on Friday, September 6, 2019.

Senior Linebacker Hunter McCain was also named as an All-State and All-Region performer. In 11 games, McCain tallied 97 solo tackles and three assisted tackles for a total of 100 tackles on the year.

Senior defensive lineman Travis Hughes was also an All-Region performer. Hughes registered 31 tackles and four assisted tackles for a total of 35 tackles in 2019.

Junior free safety Nathan Duke, who doubled as a wide receiver, tallied two interceptions for the Raiders in 2019. He also had 39 solo tackles and one assisted tackle for a total of 40 tackles. On the offensive side of the ball, Duke had six catches for 26 yards. For his efforts, Duke also earned a spot on the All-Region Team.

Three other Raiders made it on to the All-Region Team. During the 2019 campaign, senior quarterback Landon Law completed 58 passes for 647 yards and threw four touchdown passes. Law was also prolific in the Raiders’ rushing attack. He rushed for 247 yards on 75 carries and scored one rushing touchdown.

Senior offensive lineman Will Minick was also named to the All-Region Team. While Minick did a stellar job of protecting Landon Law and creating holes for Owens and the running game, he also excelled on the defensive line for the Raiders. Minick registered one sack, had seven solo tackles and two assisted tackles on the season.

Both Landon and Luke Law, along with Minick, McCain and Owens, all participated in the GISA All-Star Game, which was played on Friday, December 13.

Congratulations are in order for these fine student-athletes on a job well done.