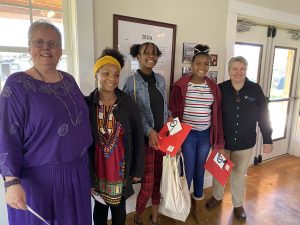 Saturday, February 29, was the culmination of this year’s Black History Month. At Koinonia Farm in Americus, Sumter County students, their families, veterans of the civil rights movement, faith community leaders, business and civic leaders, educators, county government leaders, Koinonia Farm members and interns, and visitors from far and near gathered to celebrate the richness of Black History. They also came to applaud middle school students who entered the Black History Essay and Poster contests sponsored by the Farm.

According to Bren DuBay, Director of Koinonia Farm, “We are thrilled with the attendance and for the enthusiastic support shown for this First Annual Event. We really didn’t know what to expect, but we are very pleased and grateful for all who attended and participated. We plan for this to be the first of many such celebrations.”

According to Grace Terry, volunteer event organizer for Koinonia Farm, “This year’s event, being the first of its kind sponsored by Koinionia, took a lot of ground breaking work in soil that sometimes was rocky. We are very encouraged and are starting now to plan for next year. We need many more supporters, donors, and volunteers to assist us if this celebration is to grow and be all it can be for our students and for the larger community.

Terry continued, “Black History is American history and American history is Black History. We as Americans owe it to ourselves and to future generations to learn and to teach ALL of our history, even the parts of our history that may be difficult or painful to remember. Every individual, family, and cultural group has history to be proud of and history to transcend. We can learn priceless lessons from our history….and it is easier and more enjoyable to learn it together as a community!”

The student submitted essays were as follows:

In honor of Black History month, I would like to highlight a lady Marie Van Britton Brown. She was the inventor of the home security system in 1966 along with her husband Albert Brown. That same year they applied for a patent and it was granted in 1969.

Marie Van Britton Brown was born in Jamaica Queens, New York on October 30, 1922. She worked as a nurse and her husband was an electrician.

She invented the home security system, because in her neighborhood the crime rate was very high and it took the police a long time to arrive. Her system had a set of 3 peep-holes. At the opposite side of the door, a camera was attached with the ability to slide up and down enabling a person to see through the peep-hole. Also a resident could unlock the door by remote control.

Marie Van Britton Brown and her husband had a son and a daughter. Their daughter followed in their footsteps and created her own inventions.

Even now, over 50 years later, Marie Van Britton Brown invention is still being used by smaller businesses and living facilities. Brown died at the age of 76 on February 2, 1999.

An unsung She ‘roe is who Elma Broner Snead Golphin is. She was part of the Civil Rights Movement right here in Americus, Georgia. She was one of the 26 girls and 50 boys who decided to take a stand for justice even though they were very young. She was seventeen. Their courage and bravery helped to play a part to end segregation in Sumter County, Georgia.

In the summer of 1963, my grandmother and other members of SNCC (Student Nonviolent Coordinating Committee), decided to split up in groups to take turns to protest against the unjust way things were in Sumter County. There was a horrible and unforgettable moment on Cotton Avenue, when a group of students were beaten by police and those who were called the “Blue Angles”. The Blue Angels beat the people with hot sticks. Hot sticks were clubs or cattle prods. The students who were on Cotton Avenue were arrested and jailed.

My grandmother, along with the other students who were part of the second group, walked to the jail from Friendship Baptist Church, to kneel down and pray for the students who were arrested and beaten on Cotton Avenue. When the students kneeled down to pray, the chief of police told the officers to arrest this group of students. Many were separated and sent to different jails in different counties because the jails were overflowing.  The group that my grandmother was in had to be transported on a transfer truck to an abandoned prison in Terrell County. My grandmother stated, “The one thing that scared me the most was being loaded on a truck in the dark”.  Although she was afraid, she never regretted fighting for justice. She is my SHEROE.

Have you ever visited Atlanta and wondered who “Abernathy Hwy” represented?  Well, through a little research and study, it was discovered that the was very influential in the Atlanta area during the Civil Rights Movement.  He could be considered a hero and helper of all people as he brought justice and equality to Georgia.

Before the Civil Rights Movement, Georgia was a very racist place.  Georgia was a very race related place.  It was considered a slave-holding state, which meant that before the Civil War many slaves were living in and maintained in Georgia.   There were many ways that the blacks and whites were kept separate in Georgia.  Separate water fountains and restrooms were just a few.  Many Jim Crow laws legally caused blacks to be separated from whites.  Many blacks in Georgia were denied the right to vote.

Many black Georgians, later registered to vote and by the end of 1946, more blacks had registered than any other Southern State.

Ralph Abernathy was born one of twelve children.  He was born on March 11, 1926 in Linden, Alabama.  His father was a sharecropper and his mother helped around the house.  Ralph went to school at Alabama State University and to Atlanta University (now Clark Atlanta University).  He majored in math and sociology.  He was a preacher  and was loved and admired by many in his community.  He worked closely with Dr. Martin Luther King, Jr.

Helped to lead many protests and worked to improve the lives of blacks in Georgia.  Dr. King and Ralph Abernathy became close friends as Dr. King marched in Montgomery, Alabama which is where Ralph Abernathy’s church was located.  He was a major organizer in the Montgomery Bus Boycott which started in December 1955.  He was also very helpful in creating the Montgomery Improvement Association (MIA) after Rosa Parks was arrested for not giving up her seat on a bus.

Koinonia Farm is an intentional Christian community with a rich history of standing for social justice. The Farm currently focuses on hospitality, sustainable farming, and an internship program. For more info, visit www.koinoniafarm.org

Americus – Since its founding in 1942, Koinonia Farm in Americus intended to live according to Jesus’ Sermon on the... read more