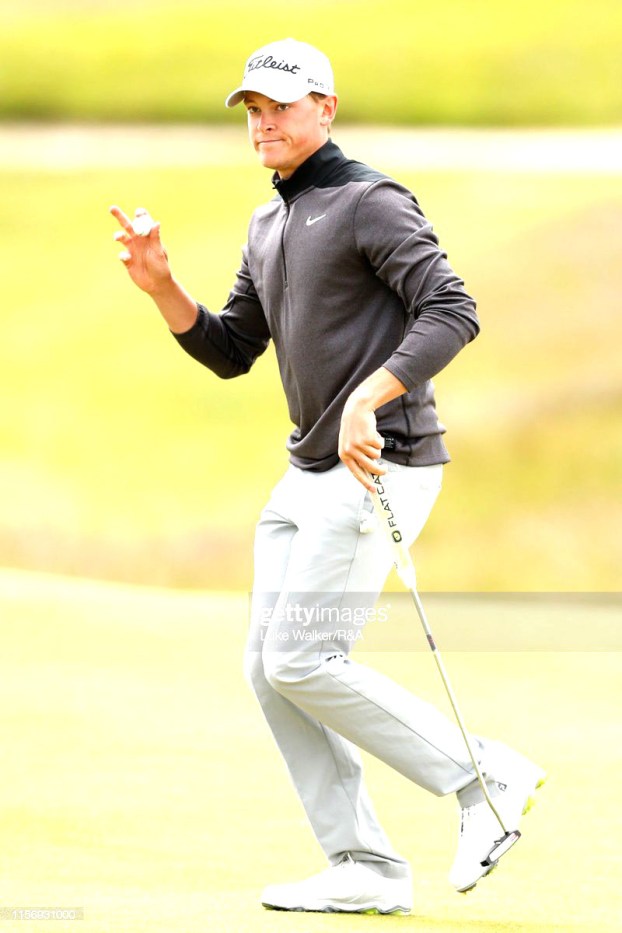 GSW standout golfer Vincent Norman has been selected to participate in the prestigious Arnold Palmer Cup to be held this summer in Ireland. Photo by Chris Fenn

NORMAN, OK -– Georgia Southwestern State University (GSW) senior Vincent Norrman has been selected to play in the 2020 Arnold Palmer Cup. The announcement was made on Friday, March 27, by the Golf Coaches Association of America and selections were revealed during a broadcast on the Golf Channel.

Norrman is one of 12 men’s collegiate players selected for the international team and the only NCAA Division II player on the men’s side. He is also the first Peach Belt Conference (PBC) golfer to ever be selected for the Arnold Palmer Cup.

Norrman was in the midst of a historic season when it was cut short by the coronavirus pandemic and the subsequent cancellation of all collegiate and conference championships. The Stockholm, Sweden native won five tournaments this year and finished in the Top 10 of all seven events played. By the end of the year, Norrman was ranked the No. 1 NCAA Division II individual according to the Golfstat computer rankings. His Golfstat adjusted scoring average of 69.25 was the lowest across all divisions of the NCAA and he currently has a World Amateur Golf Ranking of No. 47.

Norrman’s 69.10 stroke average this season was the lowest ever posted by any PBC player. His low round of the season was an eight-under 64 at the Nova Southeastern University Shark Invitational Monday and Tuesday, Oct. 7-8, on the PGA National Champions Course in Palm Beach Gardens, FL. Norrman shot par or better in 19 of the 20 rounds he played. His best 36-hole score was 135 (seven-under) and his best 54-hole showing was a 204 (12-under).

Norrman was a five-time PBC Golfer of the Week during the 2019-20 season and has been a 10-time selection during his career. He is also a two-time All-Region and PING All-America selection. He led GSW to its first-ever Golfstat team ranking of No. 1 in October and the Hurricanes did not relinquish the top spot.

This past July, Norrman was part of the Swedish team that won the 2019 European Amateur Team Championship. In August, Norrman received an amateur exemption to play in the PGA European Tour event: the Scandinavian Invitation. Most recently, Norrman was selected to represent Sweden at the 2019 Spirit International Amateur Golf Championship played in November.

The Arnold Palmer Cup was co-founded by Arnold Palmer and The Golf Coaches Association of America (GCAA) and began at the Bay Hill Club & Lodge in Orlando in 1997. The event is a Ryder Cup-style tournament featuring the top men’s and women’s university/college golfers matching the United States against a team of International players. The Arnold Palmer Cup has been played at some of the world’s greatest courses, including The Old Course, The Royal County Down, Royal Portrush, Baltusrol, The Honors Course and Cherry Hills. The 2018 matches at Evian Resort Golf Club became the only major tournament that features men and women playing side-by-side as partners.

Since its inception, over 100 former Arnold Palmer Cup alumni have gone on to earn cards on either the PGA Tour, European Tour or LPGA. Twenty-Nine of those golfers have represented Europe or the USA in the Ryder Cup or Presidents Cup, and more than 60 have claimed over 240 victories on the PGA or European Tours. The United States leads the series 12-10-1.
The Arnold Palmer Cup is supported by Arnold & Winnie Palmer Foundation. The Arnold Palmer Cup provides a platform for perpetuating Arnold Palmer’s commitment to youth development and the growth of amateur/collegiate golf. For more information, please visit ArnoldPalmerCup.com.

SCPRD announces cancellation of both Spring Gymnastics and Adult Softball