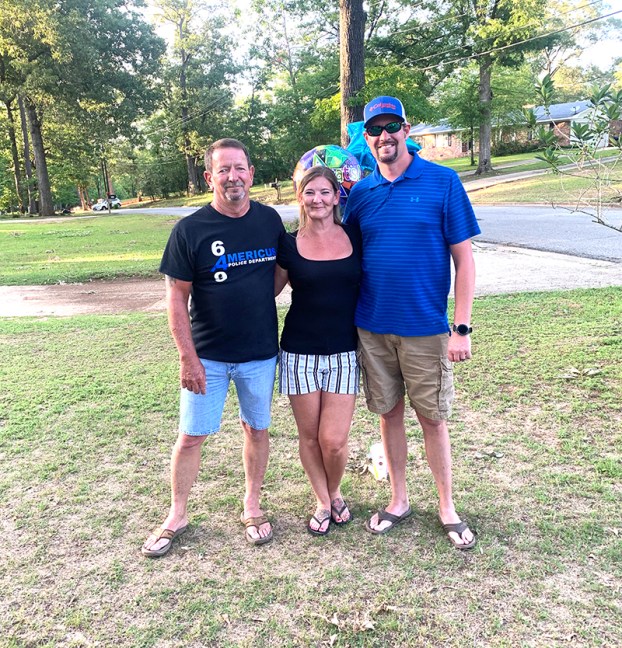 Americus Police Officer Mark McCardle (left) with his daughter, Angel Culpepper (center) and her husband Chris Culpepper. Officer McCardle is retiring from the APD after 30 years of service. Photo by Ken Gustafson

“He worked very hard, always on call,” said his daughter, Angel Culpepper. “It was tough to have a home life, but he was always a good Dad…tried to be as involved as possible, always there for us for ball games when he could be. I’m just very proud to be able to call my Dad my hero.”

As a token of gratitude and as a way to honor McCardle for his service as a law enforcement officer to the community, the APD arranged a surprise Drive-Thru parade on Tuesday evening, April 28. The parade began at 7 p.m. in the parking lot of Cheek Memorial Baptist Church, located at the corner of Oglethorpe Avenue and Upper River Road. The parade went from there to his home in Americus. 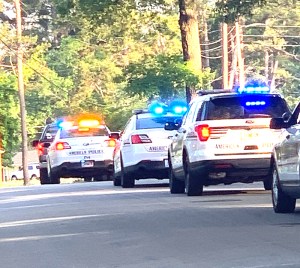 A parade of APD squad cars makes its way from Cheek Memorial Baptist Church to the house of recently retired Americus Police Officer Mark McCardle for a surprise visit to honor him for his 30 years of service with the APD.
Photo by Ken Gustafson

Several APD squad cars were part of the cavalcade and blared their sirens in honor of McCardle. As the parade turned on to his street, several signs thanking him for his service could be seen along the street. Once the parade stopped at his home, McCardle was surprised and grateful to see his daughter and son-in-law, along with his fellow police officers and friends, coming to his house to pay him a surprise visit.

“I’ve had a great career here,” said Officer McCardle. “I’ve been through a lot of experiences and what you’re seeing here is why it has been great working in this city. After 30 years, it’s time to go.” 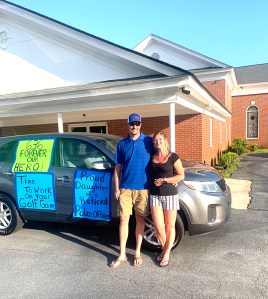 Officer McCardle’s daughter, Angel Culpepper, along with her husband, Chris Culpepper, stand next to their van, which is parked in the parking lot of Cheek Memorial Baptist Church. Their van was the lead van in the surprise parade to honor the recently retired police officer.
Photo by Ken Gustafson

McCardle went on to say that he plans to concentrate on his lawn business that he has been doing on the side and to do some fishing, golf, bowling and motorcycle riding.

“He’s been a real asset for us,” APD Chief Mark Scott said. “We hate to see him go, but we wish him well.”

The official date of McCardle’s retirement was on Wednesday, April 29. On that day, Chief Scott presented McCardle with a certificate of accomplishment for his 30 years of service with the Americus Police Department.