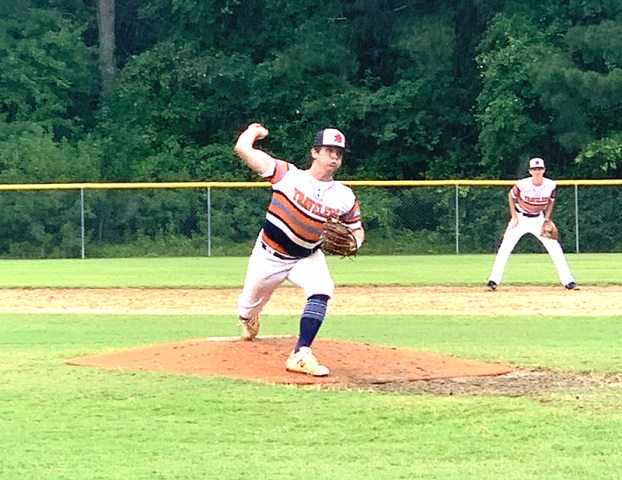 Americus Travelers pitcher Chase Ledger is pitching against the Low Country Bombers in a tune-up game on Valdosta this past weekend. Photo by Ken Gustafson

AMERICUS – For the first time in three and a half months, a local sports team finally took the field, albeit for just four innings. On Saturday, June 6, the 15U Americus Travelers Baseball Club (ATBC) traveled down to Valdosta for a series of games with local All-Star teams in order to get ready for an abbreviated summer season. However, after four innings of play against the Low Country Bombers (LCB), heavy rains came and the game was rained out. The travelers were supposed to play the South Georgia Sluggers later that afternoon at 3 p.m., but that game was rained out as well.

After four innings of play, the Travelers held a 1-0 lead, as shortstop Thomas Ray scored on a wild pitch from LCB starting pitcher Cade Johnson in the top of the fourth. However, play was not able to continue as the heavy rains came and did not let up. Ray went 1 for 2 and scored the game’s only run.

The Travelers’ starting pitcher, Landon Kight, pitched the first two innings. Kight gave up no runs and no hits. He walked two and struck out three.

Chase Ledger came on in relief of Kight in the third inning. Ledger gave up no runs or hits and walked two batters.

Though it was disappointing to not be able to continue playing, ATBC Head Coach Tim Estes was pleased that his team was finally able to start playing again.

“It was great to be back on the field with our guys this weekend. Although we were a little disappointed to be rained out after four innings, it was great to see everyone and physically be together again,” said Estes. “Everyone got at least one at bat. Two of our pitchers were able to throw. We were able to review our signal system and bunt coverages so there was definitely some positives that came out of the weekend. We are certainly looking forward to our first tournament this coming weekend and so far the forecast looks good.”