Part 2: An Americus lynching. The law of Cotton Avenue.

By: Evan A. Kutzler

The arrests on Cotton Avenue were designed to be visible.

On Wednesday, September 18, 1912, at 3 p.m., Police Chief Barrow and four officers burst into “the negro pool halls.” The police chief, a Confederate veteran, marched fifteen African American men in twos up Forsyth Street in view of everyone working or shopping downtown. They marched past a Confederate statue (since moved to Rees Park) at the intersection of Lee and Forsyth Streets frozen in the “charge bayonet” position. The Americus Times-Recorder celebrated the raid. “While the negroes idled the time away in poolrooms, farmers with whitened fields of cotton were offering good wages for cotton pickers,” the paper reported, “but none of these cared to pick cotton. The police will watch these places, and others for more loiterers, and other similar raids will be made.” The police charged the pool shooters with “vagrancy and loitering.”

The first article in this series focused on Daniel Stallings, an African American bystander mortally wounded by shots fired at William Redding by his white pursuers. Focus shifts this week to Chief Barrow, unpacking his career, the vagrancy laws he enforced with gusto, and the symbiotic relationship between cotton merchants, police, and the local newspaper. Doing so may help explain his fatal wounding nine months later on the vitrified brick pavement at the corner of Cotton Avenue and Lamar Street. 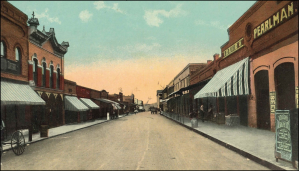 Georgia’s vagrancy laws, put in place after the end of slavery, became stronger in the early twentieth century. There were eight open-ended definitions of vagrancy, including “all persons able to work, having no property to support them, and who have no visible or known means of a fair, honest and reputable livelihood.” It was about race, class, and cotton. “The first decade of this century was accompanied by a shortage of black farm and domestic labor,” historian John Dittmer writes. “Enforcement of the state’s vaguely worded vagrancy law was effective in securing workers, for anyone without proof of steady employment was fair game for court officials.” Vagrancy laws affected poor whites, too, but the uneven enforcement hit black Georgians hardest.

Local white newspapers celebrated the alliance between planters and the law that served both economic and ideological purposes. The Times-Recorder called for “vigorous prosecutions” of vagrants as a message to “frighten other idlers into finding honest employment or drive them out of the state.” In the spring of 1912, the paper reported that the grand jury had issued six indictments against African American men. “Farmers need labor,” the Times-Recorder stated, “but this class of idlers will not work, unless forced to do it.”

The racist myth of black laziness was an old proslavery argument retrofitted to fit through a gaping loophole in the Thirteenth Amendment. The text reads, “Neither slavery, nor involuntary servitude, except as a punishment for crime whereof the party shall have been duly convicted, shall exist within the United States, or any place subject to their jurisdiction.” Criminalizing unemployment promised a stream of cheap labor because it took away an essential difference between freedom and slavery—the right to walk away. The law intimidated those whom it did not crush. The Times-Recorder knew the value of a spectacle. The paper boasted that the arrests provided “an incentive for others to get busy on the farm, or at some work here in town,” and predicted that the grand jury would get results.

The 1912 raid on Cotton Avenue served a twisted history lesson about African American freedom fifty years to the month after the preliminary Emancipation Proclamation. The language was unvarnished racism. “Evidencing the difference between the old-time darkey and the modern coon,” the Times-Recorder concluded, “Berry Foster, an industrious old negro of eighty years, died yesterday while at work, picking cotton, while the ‘new’ darkey played pool in town.” Old versus new, idle versus faithful—these terms symbolized to the writer the difference between a generation who remembered the lash under slavery and their grandchildren.

Historians whose findings contradict existing prejudices are sometimes criticized as so-called revisionists or of politicizing and weaponizing history. It should be remembered that history is always being revised and is often being weaponized. Racist and “politicized” histories in the early twentieth century weaponized history to justify everything from vagrancy laws to black disenfranchisement to the erection of Confederate monuments.

Chief Barrow represented a real and an imagined connection to an antebellum past that vagrancy laws, disenfranchisement, monuments, and racial terror attempted to restore. In 1860, his family enslaved eight African American men, women, and children. “At the age of fifteen,” his obituary stated, “he joined the Confederate cause and fought valiantly in the ranks with the soldiers in gray. He was a gallant soldier, brave and fearless in battle.” This was partly true. He enlisted at age sixteen, without parental consent, in 1861. That fall, an officer described Barrow as not having “a very vigorous constitution.” His father successfully petitioned to have his son discharged. At eighteen, Barrow reenlisted in a cavalry regiment and spent much of the war doing the homefront police work of rounding up Confederate deserters and conscripts.

Barrow turned to farming and, in the 1890s, policing. In 1870, one of the members of the household was Rose Riggins, a twelve-year old African American child born into slavery. Her place within the Reconstruction-era household was hardly an improvement from slavery. She did not attend school and could neither read nor write. She worked for the white family as a “nurse” taking care of James, the first child of William and Fanny Barrow. By 1900, William Barrow lived on Jackson Street (now the Americus Police Department parking lot) where his second wife, Rebecca, ran a boarding house. His obituary lauded his long tenure on the police force: twenty-two years on the force; eight years as chief of police. “He was filling out his term as chief of police,” his obituary stated, “when he was shot down last Saturday afternoon.” He died at his house on Jackson Street.

The death of Chief Barrow had severe personal and economic consequences for his widow. The Barrows had no children, and after the police chief’s death, the boarding house became Rebecca Barrow’s primary source of income. In 1920, she gave her deceased husband’s initials, “W.C.,” as her own. This may be interpreted as symbolic gesture of someone still mourning traumatic loss. At that time there were nine boarders including William Harwitz, a Jewish refugee from Russia who clerked in a local dry goods store, living with her. Rebecca ran the business until her death in 1939.

The news of Barrow’s injuries and the mob action against Redding traveled further than did the news of the officer’s actual death six days later. In fact, the details of Barrow’s life and tenure made only local headlines. The violence, in contrast, went viral with sensational headlines such as “Desperate Negro Lynched. Police Slayer Suffers Death at the Hands of Mob,” “Negro Wounds Officer and Mob Lynches Him,” and “Lynch as Pastor Pleads. Mob Strings Negro Up and Riddles His Body with Bullets.” One day after the lynching, the news appeared in at least seventeen states from Virginia to Oregon.

The newspaper accounts, many of which are now digitized, recreated the violence of June 21, 1913 again and again. At many lynchings, participants posed with corpses for pictures and photographic postcards. It would not be surprising if photographic evidence of the Redding lynching exists or, at least, has existed at one time. Yet photographic evidence was not necessary for lynching to carry its cultural, political, and psychological power. Detailed narratives of the lynching served in the place of visual evidence. “These spectacles produced and disseminated images of white power and black degradation, of white unity and black criminality” historian Amy Louise Wood writes, “that served to instill and perpetuate a sense of racial superiority in their white spectators.” Like Barrow marching the “vagrants” up Forsyth Street in a scene reminiscent of an antebellum coffle of enslaved people, the accounts themselves contained in them the power of white supremacy.

The challenge of telling this story in the twenty-first century is to contextualize the important history of racial terror without recreating the spectacle. The most detailed articles recounted the encounter between Barrow and Redding, the chase, the jailing, the mob, and the lynching. The newspaper accounts dehumanized Redding. He was a villain more than a victim about whom, for white readers at the time, the less said the better.

On the surface, Barrow fared better. The viral newspaper accounts described the police chief as the only sympathetic victim. Yet the reporting debased Barrow’s individuality, too. It erased his history of using Cotton Avenue as a spectacle of white supremacy through highly visible arrests. It ignored the vagrancy laws that encouraged him to do so. It exonerated by omission the planters, merchants, politicians, and newspaper editors who made it Barrow’s duty to solve the so-called labor problem. During his final week of life, newspapers pronounced him dead long before he succumbed to his wounds. The story of his wounding made its way around the United States, but his obituary appeared in only one newspaper.

Part 3 of this series will appear next week.