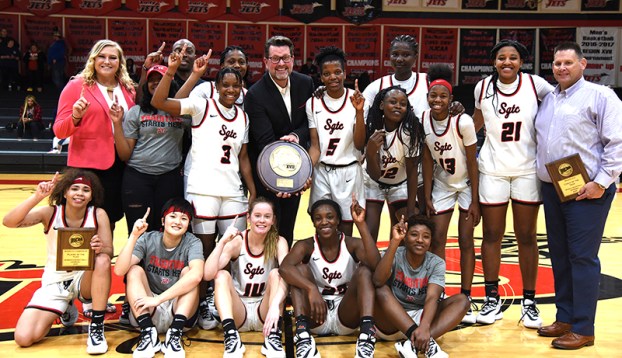 The South Georgia Technical College 2019 – 2020 Lady Jets basketball team was honored recently as an NJCAA Academic All-American team for the 2019-2020 season with a 3.49 overall GPA. The Lady Jets also posted the best win-loss record in the history of the men’s and women’s program with a 30 – 2 overall record on the court, which earned them their fourth consecutive trip to the NJCAA national tournament in Lubbock, Texas before it was cancelled due to COVID-19. The team and coaches are shown with SGTC President Dr. John Watford after clinching the NJCAA Region XVII championship in March of 2020. Photo by Su Ann Bird

AMERICUS – The National Junior College Athletic Association (NJCAA) has announced the 2019 – 2020 Academic Teams of the Year and the South Georgia Technical College (SGTC) Lady Jets basketball team was listed as the 15th top academic team in the nation in the women’s basketball category with an overall 3.49 team GPA for the year.

Two sophomores, Amara Edeh of Enugu State, Nigeria and Yasriyyah Wazeerud-Din of Marietta, GA were also named to the third team All-Academic team for posting a 3.60 – 3.79 individual GPA. Edeh was a power forward and Wazeerud-Din was a shooting forward for the Lady Jets.

“It is great having success on the basketball floor, but when every sophomore graduates every year, it is beyond rewarding,” said SGTC Lady Jets head coach James Frey.  “I am very proud of this team for their efforts on the court and in the classroom.”

Spring semester made the eighth consecutive semester that the Lady Jets had posted a team grade point average (GPA) of 3.3 or higher.

According to a report from the NJCAA national office, in spite of an academic year that was interrupted due to the COVID-19 pandemic, NJCAA student-athletes did extremely well in the classroom, as 1,026 teams earned at least a 3.0 GPA or better.

The Lady Jets finished the 2019 – 2020 basketball season with a perfect 17 – 0 conference record and a 30 – 2 overall record, which was the best win-loss record in the history of the college’s sports program despite being cut short due to the COVID-19 pandemic.

This was the fourth consecutive year that the Lady Jets had earned the right to advance to the national tournament and the sixth in seven years for Frey. It would have been the seventh trip for the Lady Jets in the 15th year of the program’s history.