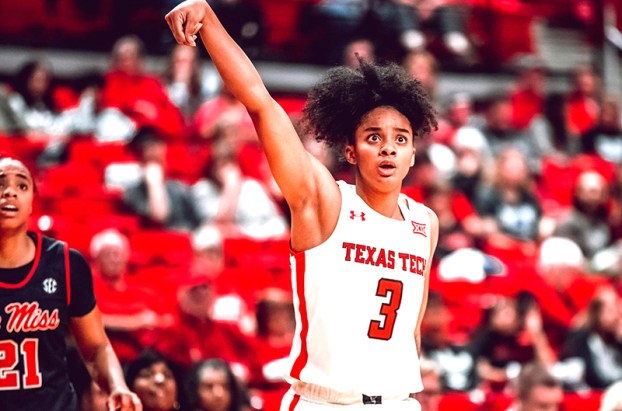 Ricka “Maka” Jackson is shown above playing for Texas Tech University as a junior. The former South Georgia Technical College standout will be a senior this coming season. Photo by Texas Tech Athletics

Jackson helped lead the Lady Jets to their first unbeaten regular season conference record under head coach James Frey with an 18 – 0 performance to capture the Georgia Collegiate Athletic Association (GCAA) regular season title. The Lady Jets earned the right to advance to the National Junior College Athletic Association (NJCAA) National Tournament for the fifth time in seven years and finished the season ranked 20th in the nation during her sophomore season. Jackson was ranked as the 15th in the country among the best junior college players.

The 5’ 10” forward from Ewa Beach, HI, was the MVP of the NJCAA Region XVII All-Tournament Team and earned second team GCAA All-Conference honors. Jackson signed with TTU after her sophomore season.

As a junior, Jackson helped lead the Lady Raiders to an 18 – 11 record and a 7 – 11 conference record during the shortened 2019-2020 season. She started three games as a junior and played in 24. Jackson averaged 3.3 points per game, 1.5 rebounds per game and had 25 assists. She also tallied 21 steals and two blocked shots. Jackson finished the season shooting an efficient 50.9 percent from the floor and made 21 of 29 foul shots for a 72.4 percent average.

“I decided to come to Texas Tech because of the family atmosphere and family is a big thing to me,” said Jackson. “Also, because of the movement and how they wanted me to help turn this program around. I wanted to be a part of that.”

Jackson had a chance to visit TTU and see their facilities when she helped lead the Lady Jets to the NJCAA National Tournament in Lubbock, Texas, where TTU is located. She is looking forward to her senior season on the floor for the Lady Raiders and hopes to make her last year there count.

“I’m looking forward to winning,” said Jackson. She said that if she could pick one person to meet, it would be Michael Jordan. Her pre-game music favorite is NBA YoungBoy and Toosi. Her favorite meal is Korean chicken and rice and she favors dogs over cats.

TTU is like all other college programs at the moment: waiting to see how the 2020 – 2021 season will unfold with the COVID-19 pandemic.

AMERICUS – With youth, high school and college sports in Sumter County having been canceled in the spring and summer... read more