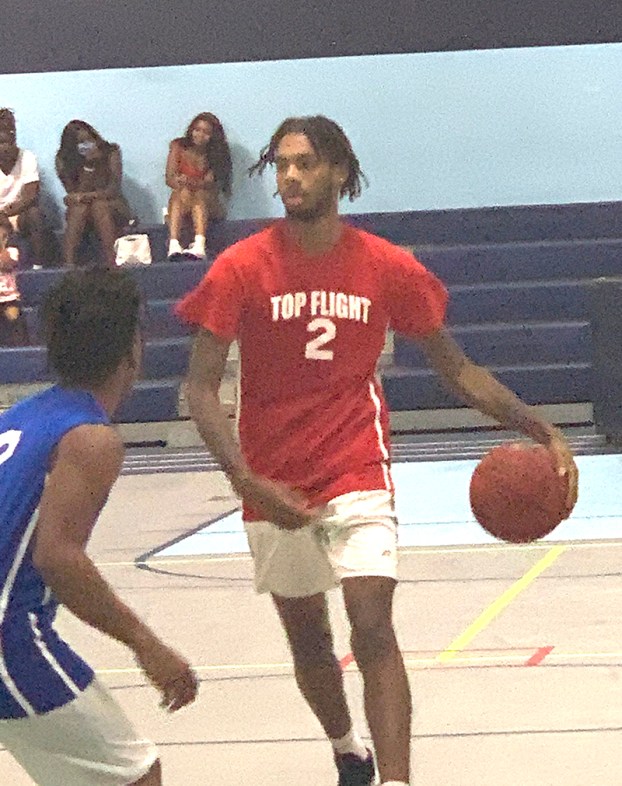 Top Flight’s Shomari Gaines (2) scored 13 points in the 90-79 win over the Legends. Top Flight is undefeated in league play at 5-0. Photo by Ken Gustafson

AMERICUS – On Thursday, July 23, the Top Flight Basketball Team (TF) showed why they are still undefeated at 5-0 as they defeated the Legends (0-5) 90-79 at The Columns at Boone Park in Week 2 of the SCPRD Adult Summer Basketball League. 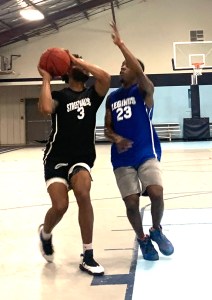 Former Southland Academy standout Mike Volley drives to the basket against Eddie Brown of the Legends. Volley scored 25 points to help lead the Street Ballers past the Legends.
Photo by Ken Gustafson

For much of the second half, Top Flight maintained a double-digit lead, but the Legends were able to cut their deficit to eight points at 62-54 when McCoy nailed a three pointer. However, that was the closest the Legends would get as TF went on to win 90-79.

In their second game against the Street Ballers (3-2), the Legends looked as if they might finally get their first win of the season. They jumped out to a 27-17 lead when Sh’Qual White drilled a three pointer with a little over nine minutes remaining in the first half. However, STB outscored the Legends 27-12 the rest of the way to take a 44-39 lead at halftime. Jaquan Leverette led the Street Ballers with 21 first-half points, including a five pointer. 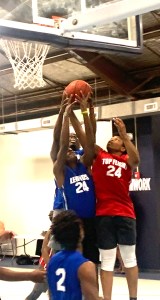 Le’Shannon Ross of Top Flight (red) battles Arthur Williams of the Legends (blue) for a rebound. Ross scored 25 points to lead Top Flight to a 90-79 victory over the Legends.
Photo by Ken Gustafson

During the entire second half, it was a closely contested game, but the Street Ballers were able to come away with a 90-82 victory.

Leverette led the Street Ballers with 32 points and Jontavious Jernigan scored 27. Former Southland Academy and Brewton-Parker College standout Mike Volley was also in high gear for STB with 25 points. White led the Legends with 38 points and McCoy had 13. 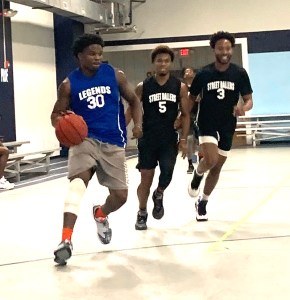 Former Americus-Sumter guard Sh’Qual White (30) drives to the basket. White led all scorers with 38 points in the Legends’ 90-82 loss to the Street Ballers.
Photo by Ken Gustafson

Top Flight remains in first place at 5-0, while the Street Ballers are in second place at 3-2 and the Legends are bringing up the rear at 0-5. All three teams will be in action at The Columns at Boone Park on Saturday, July 25. The first game will tip off at 6 p.m., followed by the second game at 7:15 p.m.

From Staff Reports   AUGUSTA, GA– The Peach Belt Conference (PBC) announced on Wednesday afternoon that all fall competition will be... read more