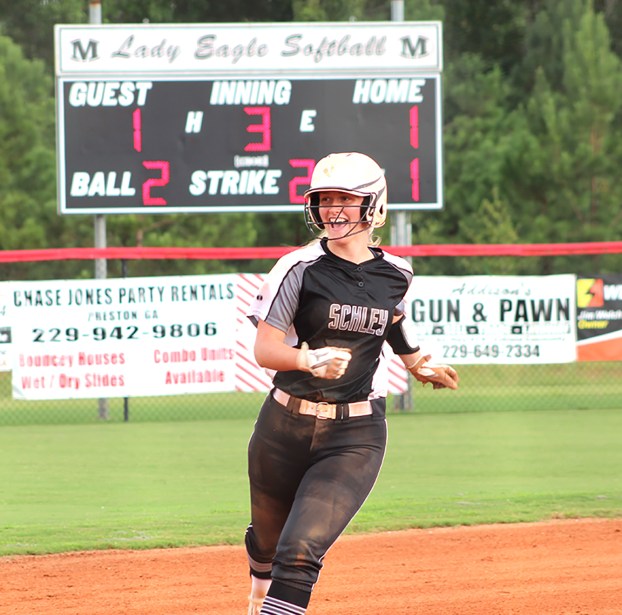 Schley County second baseman Jade Sellars belted a two-run homer in the third inning to give the Lady Wildcats a 2-1 lead at Marion County. Photo by Sheila DeVane

BUENA VISTA, GA – After losing to Hawkinsville 6-4 on Monday, August 31, the Schley County Lady Wildcats Softball Team (SCHS) was hoping to bounce back with a region victory at Marion County (MC) on Tuesday, September 1. However, just as they did in the Hawkinsville game, errors caused problems for SCHS against the Lady Eagles as well and proved to be a key factor in the Lady Wildcats’ 6-4 loss to MC.

“We made some costly errors. We are still struggling to slow the game down in high- pressure situations,” said SCHS Head Coach Jody Sellars. “We don’t have a power pitcher, so it is imperative that we play solid defensively. We must make routine plays to be competitive. We have to get better and making adjustments at the plate as well.”

In total, the Lady Wildcats committed five errors even though they out hit MC 7-4. The Lady Eagles, on the other hand, scored six runs on five hits and committed only two errors.

MC opened the scoring in the bottom of the first inning when Breanah Miller drove in a run on an RBI single. However, in the top of the third inning, the Lady Wildcats responded. Darden Campbell led off the inning with a double to left field. Two batters later, Jade Sellars belted a two-run home run over the center field wall to give SCHS a 2-1 lead. The Lady Wildcats added another run in the inning when Zoe Molina drove in Mackinzie Pugh on an RBI single to left field.

However, aided by a hit batsman, a walk, two SCHS errors and a passed ball, the Lady Eagles were able to score three runs in the bottom of the third to take a 4-3 lead. 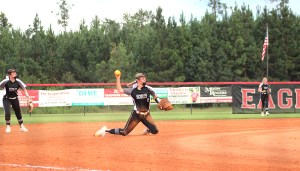 In the bottom of the fourth inning, errors by the Lady Wildcats led to two more runs for the Lady Eagles. With a runner on first and no outs, Cabella Fuller knocked a two-run home run over the left field wall to give MC a 6-3 lead.

While SCHS was able to score a run in the top of the fifth to get to within two runs, they were not able to make the comeback and fell to the Lady Eagles 6-4.

Molina led the Lady Wildcats’ offense by going 2 for 3 at the plate with two singles and an RBI. Jade Sellars went 1 for 4 at the plate with the two-run home run in the third and drove in a total of three RBIs. Campbell, Rene Rix, Perri DeVane and Landry Whaley each had a hit in this game.

Ashlyn Childs started in the circle for SCHS. She gave up a run on three hits and walked a batter in four innings of work. DeVane came on in relief of Childs and gave up a total of five runs. However, four of those runs were unearned. DeVane gave up one hit and one earned run, while walking one batter and striking out one.

Miller led the Lady Eagles’ offensive attack by going 2 for 4 at the plate with an RBI and a run scored. 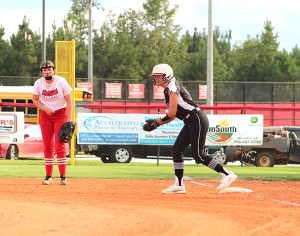 Schley County centerfielder Darden Campbell gets her lead and is looking to steal second base.
Photo by Sheila DeVane

MC starting pitcher Jeanna Shivers earned the win for the Lady Eagles. Shivers pitched the entire game and gave up four runs on seven hits, with three of those runs being earned. She walked one batter and struck out five.

With the loss, the Lady Wildcats fall to 3-6 on the season, while the Lady Eagles improve to 8-7.

The Lady Wildcats will try to put a stop to their three-game losing streak when they travel to Cusseta, GA on Thursday, September 3, to take on Chattahoochee County. First pitch is scheduled for 5 p.m.

AMERICUS – It was a day of strong performances by the local middle school and high school cross country teams.... read more