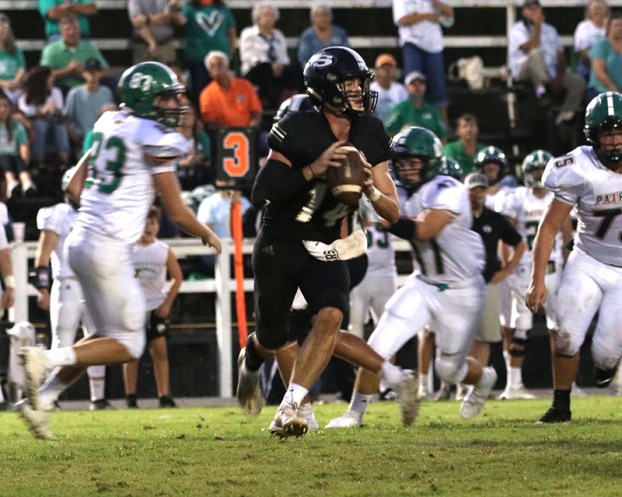 AMERICUS – Having lost their first two games of the 2020 season, the Southland Academy Raiders (SAR) came into their home game against Pinewood Christian Academy (PCA) with hopes of earning a victory against one of the best Georgia Independent School Association (GISA) teams in the state. However, though they tried extremely hard, the Raiders were unable to slow down the Patriots’ offense and as a result, fell to PCA by the score of 38-6 on Friday, September 25, at Harvey Simpson Stadium.

In spite of the loss, SAR head coach Rod Murray was extremely pleased with the effort his team made against an extremely talented PCA squad.

“Our kids played hard. They (PCA) have a good football team. They won a lot of big games last year. They’ve got a lot of returners,” said Murray. “It’s no surprise that Pinewood is good. They’re well coached. We just got to keep chipping away, trying to get better daily at what we do. I’ve set it before, we’ve got a young team in spots and it’s showing right now, but everyone has got to be patient and everyone has got to stay positive and we just got to keep chipping away at what we’re trying to do. Eventually, it’s going to pay off.”

Running back Owen Exley was the leading rusher for SAR as he gained 36 yards on six carries. In the passing game, SAR quarterback Nathan Duke completed four of five passes for 62 yards, while the Patriots completed five of 16 passes for 59 yards. 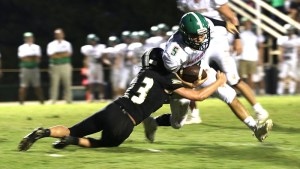 Another major factor in this game was turnovers. The Raiders turned the ball over three times on fumbles, while the Patriots turned it over once on an interception by SAR defensive end Chase Ledger.

In receiving, Ledger led the Raiders with two receptions for 46 yards. James Griffin had one reception for 11 yards and Buddy Brady caught one pass for five yards.

On the defensive side of the ball, Exley led the Raiders with 12.5 tackles and Colman Fort had eight for SAR.

The Patriots got the ball to start the game. Led by quarterback Mic Wasson, PCA moved the ball down to the SAR 25-yard line. The Raider defense was able to force the Patriots into fourth down, but on fourth and two from the PCA 25, Wasson was able to get the necessary yardage on a quarterback keeper to keep the drive alive. PCA was able to move the football down inside the five-yard line and on second and goal from the two, running back Preston Lowe scored the game’s opening touchdown. The extra point by Zach Davis was good and PCA led 7-0 with 5:55 to go in the first quarter.

The Raiders tried to use their ground game to move the ball on their first possession of the game, but fumbled on their own 40-yard line on a bad exchange from center. The Patriots recovered the fumble and were able to tack on more points on a 27-yard field goal from Davis. 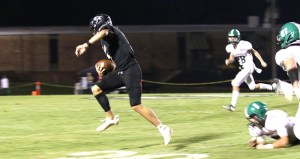 The Patriots were able to hold the Raiders on SAR’s next possession, forcing a punt.

Using its strong running attack, the PCA offense was once again able to move the ball down inside the SAR 20-yard line. Then on first and 10 from the SAR 16, Wasson threw a 16-yard touchdown pass to Josh Rogers. Davis’s extra point was good and the Patriots enjoyed a 24-0 lead with a little less than five minutes remaining in the half.

SAR was able to mount a drive by using the speed of Exley. The senior running back was able to make a long run close to midfield. The Raiders eventually moved the ball across midfield into PCA territory, but on fourth and two from the PCA 44, SAR fumbled and the ball was recovered by PCA at the Raiders’ 48-yard line. 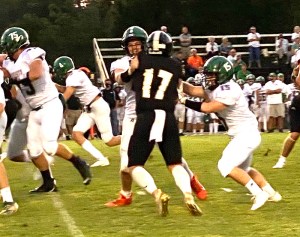 The PCA offense picked up where it left off as Wasson scrambled and ran the ball down to the SAR 23-yard line. A few plays later, Wasson threw a pass into the end zone and it was fought for by both Ledger and PCA wide receiver Gabe Edwards. Both players had their hands on the football, but the referees ruled that a tie goes to the receiver and awarded Edwards with the touchdown. Davis’s extra point was good and the Raiders found themselves in a huge hole, down 31-0 at halftime.

Coming out of the locker room, SAR had the ball to start the second half.

However, the Raiders turned the ball over on a fumble for the third time of the game. This time, the Patriots would have the ball at the SAR eight-yard line and wasted no time cashing in. On first and goal from the eight, Wasson scored his second touchdown of the night on a quarterback keeper. Davis’s extra point was good and the Patriots had a commanding 38-0 lead.

The Raiders finally caught a break in the second half, as Ledger was able to intercept a deflected pass near midfield. That gave some life to the SAR offense as quarterback Nathan Duke threw a short pass to Ledger, who ran the ball all the way down to the PCA one-yard line. Then on first and goal, Duke pitched the ball to Exley, who scored the Raiders’ only touchdown. It was the culmination of a five-play, 56-yard drive for the Raiders. SAR tried to go for two points, but the try was unsuccessful. Nevertheless, SAR was on the scoreboard trailing 38-6.

With the game out of hand, Murray put his younger players in the game to give them some valuable experience. One of those players was sophomore defensive end Henry Johnson, who made a tackle on one of the PCA running backs.

Neither team added to the scoring the rest of the way and the Patriots went on to win 38-6.

SAR will try to earn its first win of the season next Friday night, October 2, when the team travels up to Perry, GA to take on the Hornets of Westfield. Kick off is scheduled for 7:30 p.m.

The Raiders were supposed to host Edmund Burke Academy (EBA) for Homecoming on Friday, October 9. However, that game has been postponed until Friday, October 30 due to the fact that some EBA teachers and staff have contracted COVID-19.