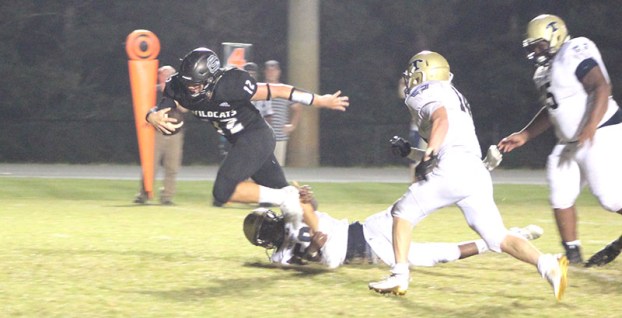 Schley County senior quarterback Jarrett Long suffered a broken ankle in the fourth quarter of the Wildcats’ game against Taylor County and will be out for the rest of the season. Photo by Sheila DeVane

ELLAVILLE – It was an extremely rough evening on Friday, September 25, for the Schley County Wildcats football team (SCHS). The Wildcats lost their GHSA Class A-Public Region 5 game to Taylor County (TC) 33-14 and SCHS senior quarterback Jarrett Long suffered a broken ankle in the game, causing him to miss the remainder of the 2020 season.

“It’s very disappointing that we didn’t play good, but we’re not going to make any excuses,” said SCHS head coach Darren Alford. “Taylor played better than we did. I should have had us better prepared. We have to move past this and get ready for Marion County next Friday.”

As disappointing as the loss to TC was, the worst news of the night for the Wildcats was the season-ending injury to Long, who sustained a broken ankle in the fourth quarter as he was trying to run the ball. For the game, long completed five of 10 passes for 58 yards and rushed for nine yards on eight carries.

In receiving, the Wildcats were led by senior Jacob Long, who caught one pass for 21 yards. In total, SCHS racked up 58 receiving yards on five receptions.

On the defensive side of the ball, senior Josh Brown led the way for SCHS with seven tackles, including one tackle for loss. 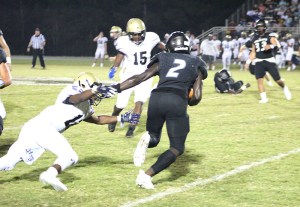 The Vikings drew first blood at the 8:36 mark of the first quarter when quarterback Jabin Ford scored from 17 yards out on a quarterback keeper. Jax Windham’s extra point was good and TC led 7-0.

The Vikings added to their lead with 6:41 to go in the first quarter when Ford completed a 75-yard touchdown pass to Dontae Reynolds. Windham’s extra point attempt failed, but TC had increased its lead to 13-0.

In the second quarter, the Vikings continued to add to their lead. With 9:24 to go before halftime, Ford scored his second touchdown of the game on a 21-yard run.

Windham’s extra point attempt was no good, but the Vikings had a commanding 19-0 lead. Then with 2:11 to go before the half, TC added to its lead when running back Nathan Patterson broke free and scampered 57 yards for a touchdown. This time, the Vikings decided to go for two and succeeded, increasing their lead to 27-0. 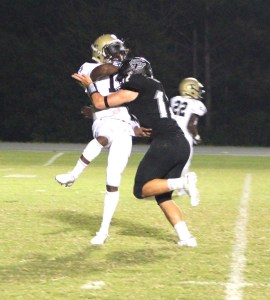 Jarrett Long, who plays defensive back on that side of the ball, puts pressure on TC quarterback Jabin Ford.
Photo by Sheila DeVane

The Wildcats trimmed their deficit to 13 points with 10:48 left in the third quarter, as Ross scored a touchdown on a 57-yard run. Pinckard’s extra point was good and just like that, SCHS was back in the game, trailing 27-14.

However, that would be as close as the Wildcats would get in this game.

With 4:10 to go in the fourth quarter, Ford scored his third rushing touchdown of the game, this one from 40 yards out. The two-point conversion failed, but the Vikings ended up leaving Ellaville with a 33-14 victory over the Wildcats.

Up next for the Wildcats is a trip over to Buena Vista to take on the Eagles of Marion County (1-2) in another important Region 5 contest on Friday, October 2. Kickoff is scheduled for 7:30 p.m.

AMERICUS – Having lost their first two games of the 2020 season, the Southland Academy Raiders (SAR) came into their... read more