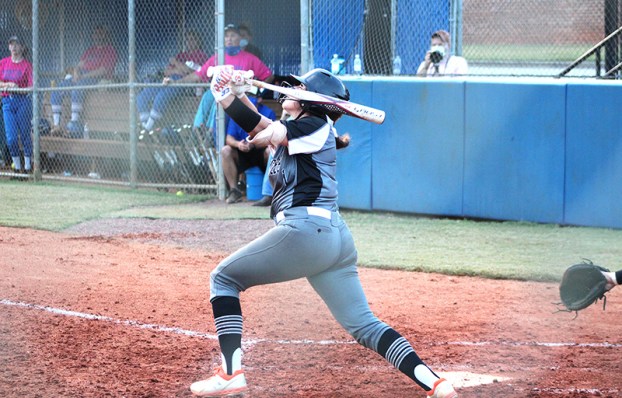 Schley County senior first baseman Zoe Molina homered in the top of the ninth inning to give the Lady Wildcats a 9-8 victory in extra innings over Brookstone. Photo by Sheila DeVane

COLUMBUS – It took two extra innings to decide the victor, but thanks to Zoe Molina’s solo home run over the left field wall in the top of the ninth inning, the Schley County Lady Wildcats softball team defeated Brookstone 9-8 in nine innings on Thursday, October 8, at the Brookstone School (BKS) in Columbus, GA.

Going into the top of the seventh inning, the Lady Wildcats were trailing 8-5 and were three outs away from their second straight loss. However, SCHS found a way to come back and tie the game. With one out, Jade Sellars singled to center field, but Molina flew out for the second out. The Lady Wildcats were down to their last, trailing 8-5. However, Landry Whaley came through with a double to left field, advancing Sellars to third. Then Berkley Goodin belted a three-run home run over the center field wall to tie the game at 8-8. Just like that, the Lady Wildcats had found a way to temporarily stave off defeat, as the Lady Cougars would come to bat in the bottom of the seventh. 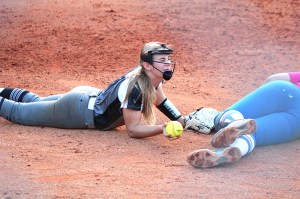 With one out in the bottom of the seventh, BKS was able to get a runner in scoring position to win the game when Caitlyn Hall doubled to right field. However, SCHS starting pitcher Makena Wurtz was able to retire the next two batters to push the game into extra innings.

The Lady Wildcats were not able to mount any offense in the top of the eighth and the Lady Cougars were able to get a runner on first with one out in the bottom half of the inning as the result of an error. However, Wurtz was able to retire the next two batters to push the game into the ninth inning. 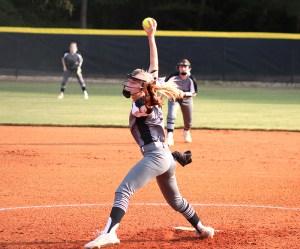 Schley County pitcher Makena Wurtz pitched the entire nine innings to get the victory for the Lady Wildcats over Brookstone.
Photo by Sheila DeVane

In the top of the ninth, Devane led off the inning, but was called out for Offensive Interference. Sellars then grounded out for the second out, setting the stage for Molina’s heroics. Molina promptly belted an 0-1 pitch over the left field wall to give the Lady Wildcats a 9-8 lead. Wurtz was once again able to retire in order the three Lady Cougar batters to secure the hard-fought, thrilling victory for the Lady Wildcats. 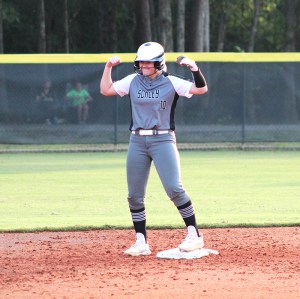 Schley County senior Rene Rix went 1 for 4 with a single and two RBIs in the Lady Wildcats’ 9-8 extra-inning victory over Brookstone.
Photo by Sheila DeVane

Wurtz went the whole way in the circle for SCHS to get the win. She gave up eight runs on 11 hits and walked one batter.

With the win, the Lady Wildcats improve to 12-9 on the year. As for the Lady Cougars, they suffer only their fourth loss of the year and fall to 20-4 on the season. 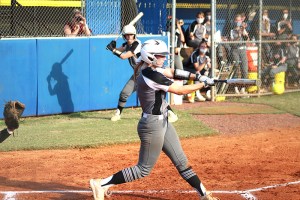 Perri DeVane is at the plate for the Lady Wildcats against Brookstone. DeVane went 2 for 5 with a triple, two runs scored and two RBIs.Photo by Sheila DeVane

SCHS has already clinched the Region 5 regular season championship and will play its last regular season game at home against Veterans on Tuesday, October 13. First pitch is scheduled for 3 p.m.