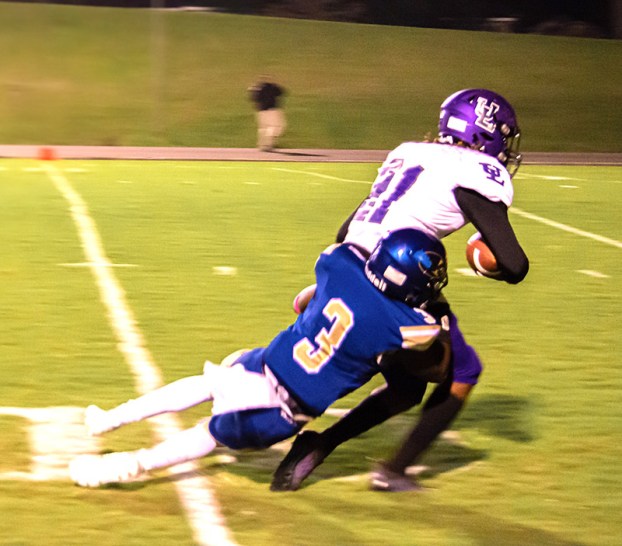 Americus-Sumter’s Kylan Carter (#3) makes a touchdown-saving tackle on Upson-Lee’s Jereuntay Smith just as the horn sounded to end the first half. Photo by James Cochran

AMERICUS – After the 53-3 drubbing they took against Peach County the week before, the Americus-Sumter High School football team (ASHS) came into Friday night’s Region 2-AAA contest against Upson-Lee (UL) desperate for its first win of the season. The Panthers fought extremely hard in this game, scoring on several big plays and nearly tying the game in the closing seconds. However, their two-point conversion attempt to tie the game with 17 seconds left failed and ASHS fell to the Knights 42-40 in a high-scoring shootout at Alton Shell Stadium.

For most of the first quarter, it was a defensive stalemate between both teams, but the Knights were able to get on the scoreboard first. With 36 seconds left in the quarter, UL quarterback Jake Davis completed a long touchdown pass to Kelsey Rockemore. The extra point was good and the Panthers found themselves trailing 7-0.

However, ASHS responded early in the second quarter. On third and 12 from the UL 43, quarterback Cameron Evans threw a 57-yard touchdown pass to Kylan Carter. The extra point by Alex Vasquez was good and the score was knotted up at 7-7 with 11:44 to go in the first half. 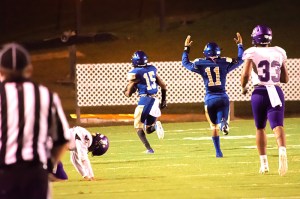 Americus-Sumter defensive back Michael Johnson (#15) intercepted a pass at the ASHS one-yard line and ran the ball 100 yards for a Panther touchdown.
Photo by James Cochran

Later on in the half, the Knights were able to move the ball down near the ASHS 10-yard line, but on fourth and two, the Panther defense came up with a huge fourth-down stop. ASHS took over on downs, but turned the ball over on a fumble, giving UL another chance to score. The Knights would eventually take advantage of the turnover when running back Milique Smith scored a rushing touchdown. The extra point attempt was good and the Knights regained the lead 14-7.

However, the Panthers would not go away. They were faced with a fourth down and four situation at the UL 44-yard line and decided to go for it. Evans threw a slant pass to Jarod Lewis, who scampered 44 yards for a touchdown. The extra point by Vasquez was good and the score was tied again at 14-14 with 3:54 left in the first half. 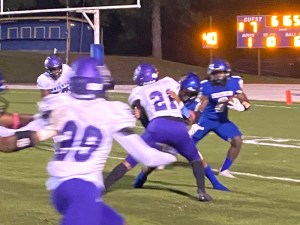 On their next possession, the Knights were poised to regain the lead, as they were able to move the ball down to the ASHS 15. However, the Panthers made what at that time was the play of the game. Davis’s pass was intercepted by Michael Johnson, who raced 100 yards the other way for an ASHS touchdown. The extra point attempt by Vasquez was no good, but the Panthers had swung the momentum of the game with Johnson’s 100-yard pick six. However, ASHS nearly gave up that momentum, as UL return man Jereuntay Davis ran the ensuing kickoff back and nearly scored as the horn sounded to end the first half, but Carter was able to chase him down and made a touchdown-saving tackle down near the seven-yard line. With that, the upbeat Panthers went into the locker room with a 20-14 halftime lead.

However, early in the third quarter, the Knights tied the game on another big play. Davis found Rockemore for his second touchdown of the game on a 55-yard scoring play. The extra point was good and the Knights regained the lead 21-20. 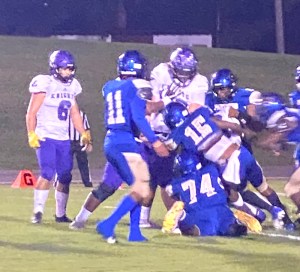 A few minutes later in the third quarter, the turnover bug hit the Panthers again, as they muffed a punt and the ball was recovered by UL on the ASHS 30-yard line. The Knights took advantage of the turnover, as Smith would later score his second rushing touchdown of the game. The extra point attempt was good and UL extended its lead to 28-20.

However, the Panthers struck again for another big play. On first and 10 from their own 12-yard line, they gave the ball to running back Christian Waymon. Waymon fought his way around the left side through several tacklers and broke free for an 88-yard rushing touchdown. ASHS decided to go for two, but Evans bobbled the snap, nullifying the opportunity. Nevertheless, ASHS was right back in it, trailing 28-26.

The UL offense went right back to work by marching the ball down to the ASHS 14-yard line. Then on first and 10 from the 14, Smith scored his third rushing touchdown of the night. The extra point was good and the Knights extended their lead to 35-26 with 6:07 left in the game. 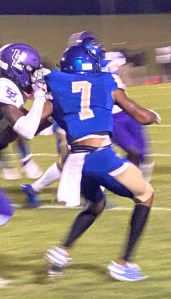 Americus-Sumter defensive back Breylon Green (#7) tries to make a play on defense against Upson-Lee.
Photo by Ken Gustafson

The Panthers got a good return on the kickoff and were able to move the ball down to the UL 46. Then on third and one, Evans threw a strike to Johnson, who scampered 46 yards for another ASHS touchdown. The Panthers went for two and got it, bringing themselves to within one point at 35-34 with 4:48 to play.

However, the Knights went exclusively to the running game on their next possession and Smith was able to churn out the yardage. More importantly, the Knights were able to run the clock down to 1:18 before ASHS called timeout. The Panthers had a chance to get a stop, as they forced a third-and-one situation from the 50, but Smith was able to not only gain the necessary yardage, but scored on the play. The extra point was good and the Knights had a 42-34 lead. However, the Panthers, who had scored on big plays all night, still had 1:10 remaining to tie the game.

On the ensuing kickoff, a personal foul penalty was assessed against the Knights, moving the ball to the UL 35-yard line and giving the Panthers great field position. 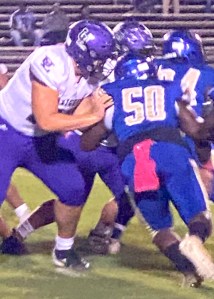 On second and 10 from the UL 35, Evans found Johnson for a 13-yard gain. On top of that, a roughing the passer penalty was assessed against UL, which moved the ball down to the 22 of the Knights. On the next play from scrimmage, Evans attempted a pass, but defensive holding was called against the Knights, moving the ball down to the UL five-yard line. Two plays later, Evans found Johnson in the end zone for a touchdown, which meant that the game would come down to a two-point conversion attempt with 17 seconds left.

However, on the two-point conversion attempt, Evans’ pass was incomplete, which meant the only hope for the Panthers was to recover the on-side kick. Unfortunately for ASHS, the Knights recovered the on-side kick and escaped Americus with a 42-40 victory. 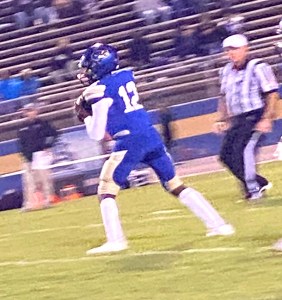 Americus-Sumter quarterback Cameron Evans is back to pass against Upson-Lee.
Photo by Ken Gustafson

With the loss, ASHS is still winless on the season at 0-5, while UL improves to 4-2.

The Panthers will try once again to earn their first win of the season when they host Jackson on Friday, October 23, on Breast Cancer Awareness Night. Kickoff is scheduled for 7:30 p.m.