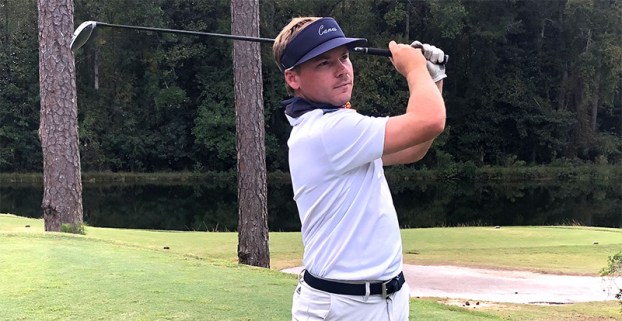 GSW’s Chase McLain shot a 64 in Round 2 of the UNG Fall Invitational. McLain’s performance ties the 18-hole lowest score ever achieved by a Hurricane golfer. This record was previously held by former GSW standout Vincent Norrman. Photo by Chris Finn

GAINESVILLE, GA. – After a rough start, Georgia Southwestern men’s golf player Chase McLain shot a round 2 low of 64 (-8), climbing his way into fifth place to end Day 1 of the UNG Fall Invitational played at the Chattahoochee Golf Club. McLain, who leads the pack with 12 birdies, shot a 73 (+1) in the opening round for a total score of 137 (-7). His 64 ties the 18-hole low for GSW, which was previously held by former Hurricane Vincent Norrman.

The Hurricanes will finish up their shortened fall slate and will tee off for Round 3 tomorrow at 9 a.m. For more updates on the GSW golf team follow them on Twitter at @GSW_GOLF.