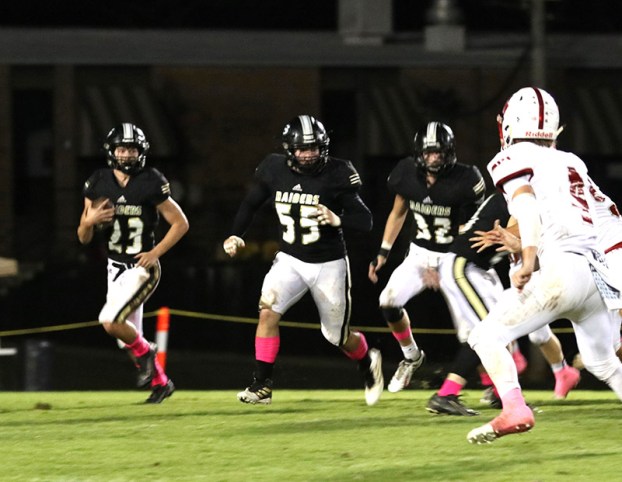 Southland Academy running back James Griffin (#23) rushed for 148 yards on 13 carries and scored one touchdown to help lead the Raiders to their first win of the season, a 28-8 victory over Edmund Burke Academy. Griffin is picking up blocks from Kolden Kinney (#55) and Colman Fort (#32). Photo by Sherri Bass

Raiders earn first win of the season on Homecoming Night

AMERICUS – It has been a rough and challenging season for the Southland Academy Football Team (SAR). The Raiders came into their Homecoming game against Edmund Burke Academy still searching for their first win of the season. Up until their battle with the Spartans, the Raiders had gone toe to toe with their previous opponents, but had no victories to show for it. However, on this night, SAR’s hard work would finally pay off. Thanks to their strong ground game, as well as their stout defense, the Raiders were able to take control in the second half and earned a hard-fought 28-8 Homecoming victory over the Spartans on Friday, October 30, at Harvey Simpson Stadium.

“The kids have stayed so positive and worked hard every day,” said SAR Head Coach Rod Murray. “Our coaches work everyday also. They had them prepared on both sides of the ball. EBA is a proud program and very tough.  It was just a great feeling to see our kids and school smiling after a game.  We are ready to get ready for region play now and our kids will have great energy this coming week because of this win.  We are very thankful for it and we thank everyone for supporting us.” 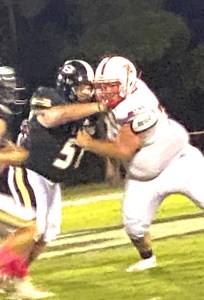 The SAR running attack, led primarily by running backs James Griffin and Owen Exley, was the main factor in SAR being able to control the game and earn the win. 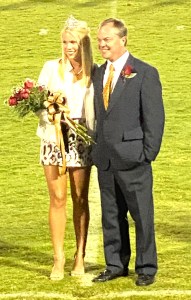 In the first quarter, the Raiders were able to move the ball down to the EBA 12-yard line. However, a penalty against SAR moved the ball back a few yards, but quarterback Nathan Duke was able to run the ball towards the right side and scored on a quarterback keeper. However, another penalty was called against the Raiders, nullifying the touchdown.

A couple of plays later, Duke tried to throw a pass to his left, but he ball fell to the ground and was picked up by the Spartans. However, though it looked as if it was an incomplete pass, the referees ruled that Duke fumbled the ball and awarded EBA with the turnover.

The turnover nullified an excellent drive by the Raiders, but the SAR defense was able to force the Spartans into punting on their next possession. 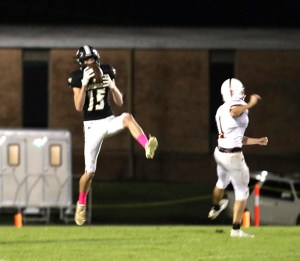 Southland Academy wide receiver Buddy Brady makes a 52-yard catch in the first quarter against Edmund Burke Academy. That catch would lead to the Raiders’ first touchdown of the game, which was scored by Owen Exley.
Photo by Sherri Bass

On SAR’s next offensive possession, the Raiders had the ball at their own 38-yard line. However, Duke was able to connect with Buddy Brady on a 52-yard pass play, which moved the ball down to the EBA 15-yard line. A couple of plays later, Exley scored from five yards out. The extra point by Chase Ledger was good and the Raiders had a 7-0 lead with a little over 11 minutes to go in the first half.

With about four minutes left in the first half, the Raiders had the ball in EBA territory again, but a bad snap from center resulted in a huge loss and SAR eventually had to punt.

Both teams would get one last chance to mount a scoring drive during the last two minutes of the first half, but neither offense could put together a drive and the halftime score ended up being 7-0 in favor of SAR. 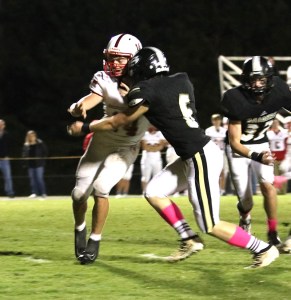 The Raiders got the ball to start the second half and immediately went to work on the ground. Using the running attack of Griffin and Exley, SAR used its ground game to move the ball all the way down to the EBA 3-yard line. Then on second and goal from the 3, Exley scored his second rushing touchdown of the night. The extra point by Ledger was good and SAR had a 14-0 lead.

However, the Spartans had a response as running back Brantley jones broke through the SAR defense and ran the ball all the way down to the Raiders’ 16-yardline. However, the Raider defense was able to force a turnover on a fumble, giving the offense another opportunity to put points on the board.

It didn’t take long for that to happen. The Raiders had the ball on their own 20-yard line, but they gave the ball to Griffin, who promptly broke a few tackles and scampered 81 yards for an SAR touchdown. Ledger’s extra point was good and SAR enjoyed a 21-0 lead. 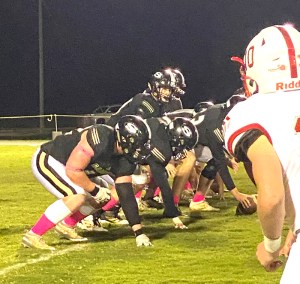 Southland Academy quarterback Nathan Duke is under center and is leading the SAR offense against EBA.
Photo by Ken Gustafson

The Spartans were able to mount a drive that resulted in a rushing touchdown and two-point conversion by quarterback Duvon Waters. However, on SAR’s next possession, the Raiders threw the knockout punch when running back Hudson Collins scored a 51-yard rushing touchdown. The extra point by Ledger was good and the Raiders went on to earn their first win of the season by the score of 28-8. 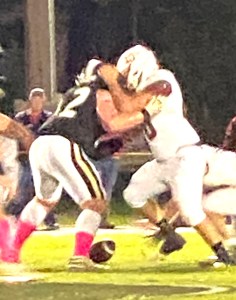 For Duke and his teammates, earning their first win of the season after coming up short during the last several weeks was a huge relief. “It feels great. All we needed to do was get that first win under our belt and now, it’s only up from here. We’re looking forward to what’s coming,” said Duke.

The Raiders will try to build on Friday night’s success when they host the Valwood Valiants in an important Region 3-AAA contest on Friday, November 6. Kickoff is scheduled for 7:30 p.m.