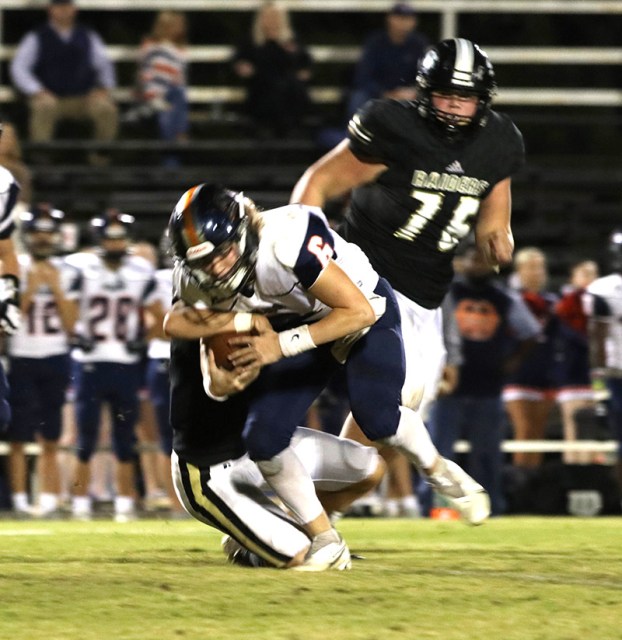 AMERICUS – Having achieved their first win of the season over Edmund Burke Academy last week, the Southland Academy Raider Football Team (SAR) came into their first Region 3-AAA contest of the season against Valwood (VS) hoping to build upon last week’s success with a win over the Valiants. On Friday evening, November 6, the Raiders were just seconds away from making that a reality. However, the Valiants were able to kick a game-winning field goal as time expired to defeat SAR 22-20 at Harvey Simpson Stadium.

Before the game-winning field goal, the Valiants had successfully kicked a field goal on the previous play, but were penalized for having more than 11 players on the field. As a result, VS was assessed a five-yard penalty, but was still allowed to try the kick again. On the second try, they were able to make the field goal to win the game.

“Our players have played hard. Our coaches have coached hard,” said SAR Head Coach Rod Murray. “I feel so bad for our team and for our school. We just can’t catch a break this year, but our players and coaches are still working hard and I appreciate everyone for supporting us.”

The Valiants scored the first 10 points of the game in the first quarter on a touchdown and a field goal and led 10-0 at the half, but the Raiders responded in the second half. In the third quarter, running back Hudson Collins scored SAR’s first touchdown. The extra point was good and the Raiders were within three points at 10-7. 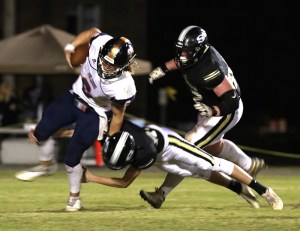 The Valiants responded with another field goal, but the Raiders countered as Collins scored his second touchdown of the night. The extra point was good and SAR had come from behind to take a 14-13 lead.

With 3:53 to go in the game, the Valiants were able to mount a drive that ended in a go-ahead touchdown, but the Raiders responded once again when quarterback Nathan Duke scored on a quarterback keeper to give SAR a 20-19 lead.

However, the Valiants were able to orchestrate a drive in the last minute and moved the ball deep into SAR territory. As time was running out, VS attempted a game-winning field goal, which was successful. However, the Valiants were penalized for having too many players on the field. Unfortunately for the Raiders, it was a “live ball penalty” meaning that the Valiants would be penalized five yards, but would still get another chance to kick the winning field goal, which they did.

The Raiders will try to rebound from this setback when they host Tiftarea Academy on Friday, November 13 at 7:30 p.m.