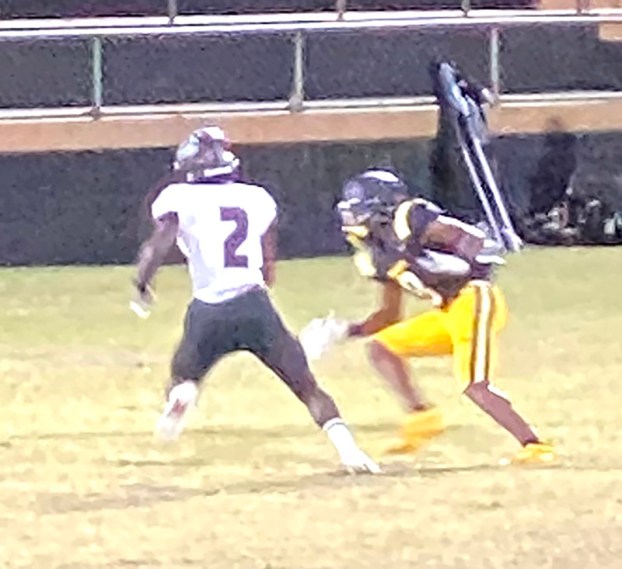 CUSSETA, GA – With last week’s 19-7 non-region victory over Creekside Christian Academy behind them, the Schley County Wildcats (SCHS) came into Friday night’s GHSA Class A-Public Region 5 clash with undefeated Chattahoochee County (CCHS) hoping to knock off the Panthers and climb back into the Region 5-A race. After the Wildcats’ 28-7 loss to Macon County two weeks ago, SCHS dropped to sixth place in the Region 5-A standings with a region record of 1-3. They were hoping to build on last week’s win over CCA and improve their standing in the region. However, due to numerous turnovers on the night, the Wildcats’ hopes of an upset win were dashed and they fell to the Panthers 47-7 on Friday, November 6 on Homecoming Night at CCHS.

The Panthers scored early in the first quarter when running back Andravius Hall broke free for a 20-yard rushing touchdown. The extra point by Javier Flores was good and CCHS had an early 7-0 lead. 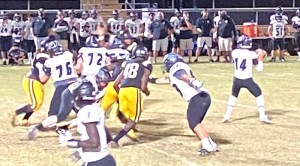 The Wildcats tried to respond on their first possession of the game, but they turned the ball over on a fumble. The ball was recovered by Carlos Dunovant of CCHS, who scampered back the other way for a touchdown. The extra point by Flores was good and SCHS found themselves down 14-0.

The turnover bug bit the Wildcats again on their next possession. They fumbled the ball in their own territory and the ball was recovered by the Panthers. CCHS would eventually move the ball down to the SCHS two-yard line and cap off the drive with a touchdown by quarterback Cody Duffy on a quarterback keeper. The extra point by Flores was no good, but CCHS had taken a 20-0 lead. 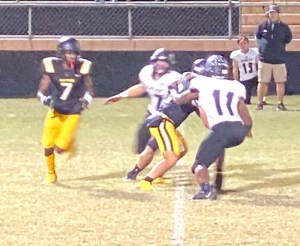 The Panthers very nearly had another touchdown later in the half, as wide receiver Kahleel Latimer had gotten past his defender, but dropped what would have been a sure touchdown pass.

Later on in the first half, SCHS quarterback Jay Kanazawa completed a pass to JaLewis Solomon, who ran the ball all the way down inside the CCHS five-yard line.

The big play by Solomon gave the Wildcats a golden opportunity to score, but a series of penalties and a tackle for loss backed up SCHS all the way to the 31-yard line. The Wildcats were eventually forced into a fourth-down situation and decided to go for it, but the attempt failed and the chance to score went by the boards.

Later on in the half, the Panthers forced the Wildcats into committing another turnover, as Kanazawa’s pass was intercepted by Artellious Edmond, who ran the ball back for a CCHS touchdown. The extra point by Flores was good and CCHS had a commanding 27-0 lead with a little less than seven minutes to go in the first half. 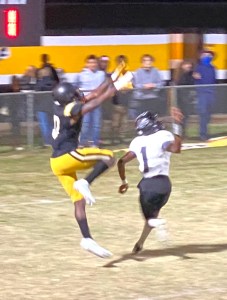 Then with just a few minutes left before halftime, the Panthers added more points when Duffy connected with Latimer for a 23-yard touchdown pass.  The extra point by Flores was good and the Wildcats found themselves in a huge hole, trailing 34-0 at the half.

The Wildcats got the ball to start the second half, but they weren’t able to keep it long.   Kanazawa’s pass was intercepted by Ahmad Griffin and it gave the Panthers great field position. CCHS wasted no time in capitalizing, as Duffy was able to find Dunovant for a short touchdown pass.  The extra point by Flores was good and CCHS had a 41-0 lead. 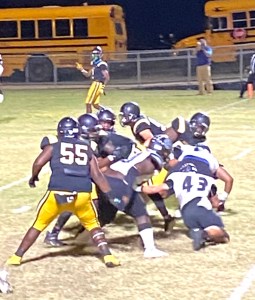 Schley County middle linebacker Jacob Long (43) and his teammates try to make a stop on the goal line against CCHS.
Photo by Ken Gustafson

The Wildcats tried to mount a drive on their next possession, but once again, they were not able to hold on to the football. The Panthers recovered the fumble, but fortunately for SCHS, the Wildcat defense was able to force the Panthers into punting.

However, the Wildcats muffed the punt and the ball went over to CCHS.  Fortunately for the Wildcats, the defense once again came up with a stop, forcing the Panthers to punt.

As the third quarter was winding down, the Wildcats were finally able to get on the scoreboard, as running back Casey Solomon broke through the Panther defense and scampered 21 yards for a SCHS touchdown. The extra point by Aaron Pinckard was good and SCHS was on the board to begin the fourth quarter, trailing 41-7. 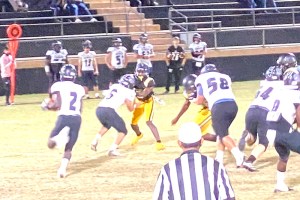 Schley County’s JaLewis Solomon (2) tries to run around the left side as Malachi Banks (5) and Wade Cox (58) block for him.
Photo by Ken Gustafson

However, on the ensuing kickoff, Naketa Bell ran the ball back 75 yards for another CCHS touchdown. Flores’s extra point attempt was no good, but the score was now 47-7 in favor of the Panthers.

However, just as the Wildcats were about to get the ball back, the turnover bug bit them once again. On the ensuing kickoff, the ball was fumbled by SCHS and recovered by the Panthers at the Wildcats’ 21-yard line. However, the Wildcat defense was able to stop the CCHS offense and got the ball back on downs for the offense. The SCHS offense tried to mount a last-minute drive, but the clock ran out to end the game. 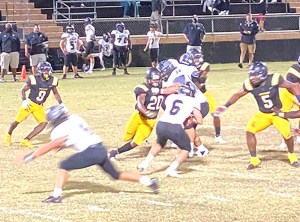 Kanazawa completed 7 of 13 passes for 88 yards and threw two interceptions.  On the ground, the Wildcats rushed for 81 yards on 29 carries. Casey Solomon was the leading rusher for SCHS with 35 yards on six carries and one rushing touchdown.

The Wildcats will try to rebound from this setback when they host Manchester next Friday on Recreation Night. Kickoff is scheduled for 7:30 p.m.