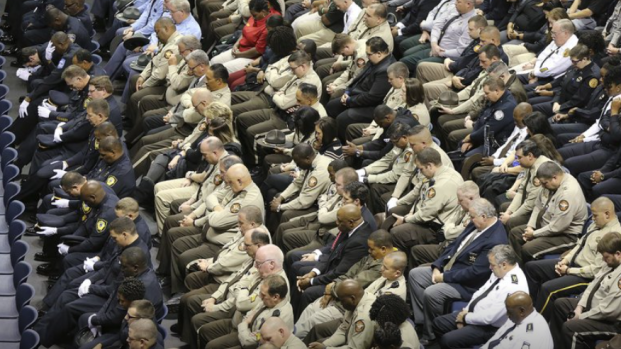 It is a side to the story I have always treasured. It was one of those experiences that doesn’t translate well into words. It is also one of those experiences I have always felt was a confidential in some way. It was sacred and to be held in confidence by only those who were there. But it is a story worth telling, and perhaps a little glimpse into a piece of Jody and Nick’s story.

South Georgia Technical College (SGTC) had planned a holiday party for their staff, but celebrations didn’t quite seem appropriate after December 7, 2016; so, they donated their catering services to our local law enforcement. It was a much-appreciated gift for law enforcement and their families as they had been involved in a very intense manhunt for a suspect who had “wreaked havoc on this community” as Vernon Keenan, head of the GBI so aptly put it. It was December 8th, and we changed our focus to the next thing in front of us, praying for the life of Jody Smith and to lay Nick Smarr to rest. The night before, my friend, David and I had been tasked with feeding 300 law enforcement officers who had come to offer aid in the hunt. Last minute, our local eateries put together 600 meals in just over an hour for these officers. David and I were amazed at our neighbors. I refer to it as the time I got to witness a “loaves and fishes” experience. Perhaps because we were able to see that miracle come together, we received an invitation to join in on the meal SGTC had donated.  It was an invitation we were both surprised to receive and one not real certain we should accept. Except we did. Like much about those days, my mind would burn the details into my mind. As I was in my closet looking for my boots to wear to this dinner, Donnie McCrary came on the radio to deliver the news Jody Smith had also died because of his wounds. My legs would no longer hold me. David found me bawling, sitting in my closet and when he spotted me, I whispered through my tears, “Jody’s gone.” David, speechless himself, stepped away and told me he would be waiting for me. I grabbed my boots and through what felt like mud, we packed up and went to the “command center” for dinner.

Eric Bryant was holding the door open. I hugged him—no, I clung to him trying to find words appropriate for this event. I felt his bulletproof vest. Superman doesn’t wear a bulletproof vest. It was all too much to take in.  Through my tears I said, “I’m sorry. I’m sorry. This is breaking me in two.” He leaned down and whispered back to me, “I’m sorry too. But we need you to hold it together.” His words weren’t a dismissal of my tears or my sentiment. It was a request. He needed me to continue in my efforts. He knew the next week was going to be filled with an unimaginable amount of pain and he needed us, the residents, to hold it together and stand with them as they laid Nick and Jody to rest. It was motivation, but it was also a request not to leave them alone now. They would need our little village to stand with them. Just hold it together for a few more days. I remember feeling like it was too much to ask of me, to ask of our neighbors—the weight of it all was too much and we just wanted to lay it down. But Eric had asked we not do that just yet. Law enforcement needed us like we had needed them. “Hold it together” was my new mantra and seemed like a small request compared to what we had asked of them. We had asked our law enforcement to give their absolute best on perhaps one of their worst days. They would. They did. But it wasn’t over, this would be a wound we would carry for quite a while.

The dinner was unlike any other I have been to. I didn’t want to be there, but I would put in my appearance and leave as soon as I could. The event offered views I had never seen before. I wasn’t prepared to see them now. The men and women in this room I loved deeply, and they were superheroes. They were strong, they were determined, they were brilliant, they had all the answers, and for me, they were larger than life.

In this room, officers were wearing their exhaustion. There were friendly faces, but they were marked with the tragedy they had seen over the past 48 hours. This was the first time they had to take in their losses. There were grown men and women, my heroes, with tears in their eyes. We were fresh in realizing we would be saying goodbye to two officers, not just one. The pain was palpable. The hunt was over and now there was nothing left but to grieve. This was the night I realized I had not allowed our officers their humanity and to see them being human was almost too much to bear. Their exhaustion reminded me I rarely honor the fact they grow weary. Their tears reminded me they too carry weight of life just as I do. Their kindness to each other reminded me they were my neighbors. Their spouses and children told me they have families that give them life just as mine do. Their shock reminded me that they too can be caught by surprise of how cruel the world can be. Their smiles through grief told me they too dig from a well of rich emotions. I had been seeing uniforms and badges, and tonight I was seeing real people, with real limits. There were limits to their strength. There were limits to their power to make things right. There were times they had to stretch their faith. There were questions they couldn’t answer. There were times, they too, had to dig into something greater than themselves to simply put one foot in front of the other. There were times the grief was overwhelming. On this night, I saw how very human our law enforcement are. It is extremely hard to let Superman be a human.

It is hard to see heroes as real people. It is difficult to allow those who feel so much bigger than you to have the same struggles as you. But on this night, I would. I was a part of a circle that evening as these men and women of law enforcement stood in a circle crying out to God in thanksgiving, asking for the comfort so desperately needed, for the strength and renewal of spirit to carry out the tasks in front of them, and for continued protection to go forward. I was a part of that circle and I was a part of that prayer. It humbles you to realize folks who you think are so much bigger than you ask God for the same things you do. There is something a little painful in realizing heroes are much like you. But there is something wonderful in realizing you aren’t so different from those you consider a hero.

As the week progressed, I thought of this night and the reaction it solicited out of me. I went to Nick’s funeral. I hugged my neighbors. I helped where I could, I told of my little village stepping up for our law enforcement. I visited with the Smith family as they prepared for Jody’s funeral. I went to Jody’s funeral and stood in my yard as car after car took Jody home. I even helped in creating a Christmas for the families of the man who fired a gun at our beloved Nick and Jody. I got a front row seat to how our community showed love and grace and hope to the rest of the world. I am grateful for Eric’s words still. I am glad I held it together or I would have missed how this community held itself together. We are a community of grace. There are superheroes around us to be sure. Those superheroes are full of humanity. I am grateful for that. How very superhuman of us, we just keep doing the best we know how to do. It is amazing how that simple task makes us overwhelmingly powerful and overwhelmingly human. May we always take to heart our task of holding it together.