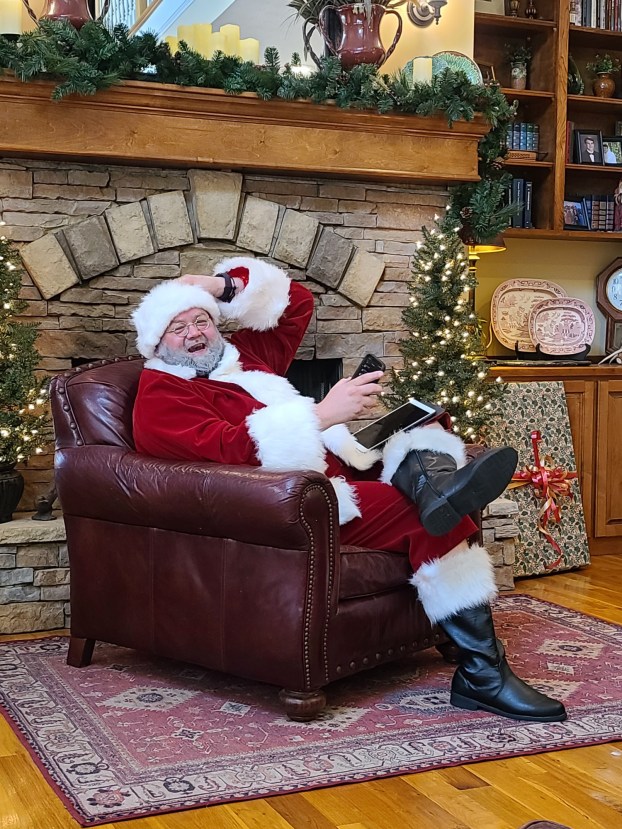 Our Deputy Santa is the coolest cat in town!

This is Santa’s busiest time of year. He is busy packing gifts of all sizes. He researched who has done their best and who needs some improvement in their behavior. The naughty and nice list is a top-secret formula, but you can be assured Santa never misses a single thing.  He has taken the reindeer to the vet to make sure they are ready for their flight. Prancer had to have his fur shampooed, and Dasher needed some vitamins, but the doc said they are all ready to take flight on Christmas Eve.  Saint Nick has cleaned his suit and shined his boots. Santa must be prepared for both the weather in Sumter County and the climate in Antarctica. The sleigh has been checked out and Santa is expecting a comfortable ride. The sleigh bells have been polished and shined and have just the perfect tone to sing out as the jolly man takes to the skies.

Because St. Nick can’t be everywhere all the time, sometimes he deputizes his favorite people to help him out. It is a stringent process, but if you pass the test to be a Deputy Santa you get a bit of his magic. Nigel Poole knows all about this magic because he is a Deputy Santa. Nigel has seen the naughty and nice list. Santa even taught him how to wear the suit and boots and groom his beard. This time of year, Nigel’s cheeks, nose and lips grow a bit pinker and his beard becomes a bit whiter. Not surprising, Ray Manila, who oversaw creating lots of magic at the Rylander Theater was once a Deputy Santa. Ray’s suit still has plenty of magic in it, so Nigel inherited it when he was deputized. Nigel reports the magic stays strong as long as the suit is cleaned correctly and put away after Christmas. However, if it is ever needed, Santa will send some magic for Nigel to add to it.  Nigel has had some sweet gigs as a Deputy Santa. He got to share some Christmas magic with the folks of Albany as he paraded through the streets in his very own sleigh.

COVID-19 can’t slow Santa or his deputies down. Facetime and Zoom are helpful to us, but they are also helpful to Deputy Santas. This year, Nigel’s first visits were with kids in Orlando. It went so well, he decided to visit Sumter County kids once again. Since he must do things a little differently this year, Nigel put out a call on Facebook for parents to contact him. Santa planned for Nigel to spend some time at one of his Christmas cottages and the virtual visits began. Nigel had conversations with kids aging from 2 to 14. One of his favorite visits was with Pete, an 8-year-old who is non-verbal secondary to Autism. Santa told Nigel exactly what to do. Because Pete responds to tactile stimuli, Nigel told Pete’s mom to get something that had his hat and suit fur on it so Pete would know exactly who he was talking to. Nigel reports Santa was exactly right, and Pete loved his visit with Nigel.

Because Santa trained him, Nigel can get his hands on the naughty and nice list. Nigel reports all the kids he talked to this year were on the nice list, which is great news! Santa also was able to give him a list of what the kids wanted for Christmas. So, instead of asking them what they wanted, Nigel was able to tell them.  Nigel told one boy, Jack, “I see here you want some dinosaurs!” Jack was excited that Santa already knew what he wanted. Nigel reports Jack has a surprisingly good chance of getting some dinosaur action figures because Jack is indeed on the “nice list.”

Being a Deputy Santa comes with a lot perks but being paid in money isn’t one of them. Nigel reports, “Christmas is about magic and love—I didn’t want to put a price tag on that.” So why does Nigel team up with Santa every chance he gets? Nigel says, “When you’re feeling down the best thing you can do is to reach out. It is a great way to give back.” Nigel is an excellent Deputy Santa. Santa reports Nigel is perfect for the job because he stills believes in magic and has a jolly spirit. Santa says Nigel is quick to share that jolliness with others, all year round, so he trusts Nigel to be on his team. Sumter County must be on the nice list, since we get such a gift as Deputy Santa Nigel Poole.