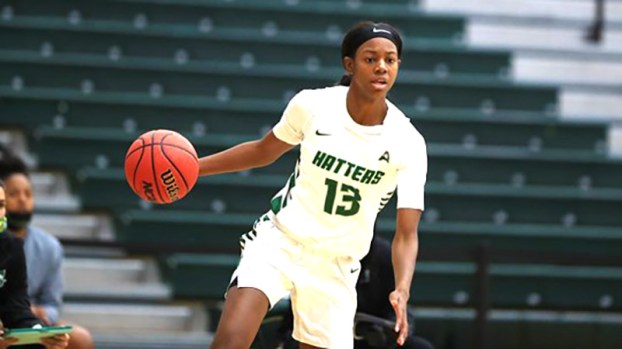 Former SGTC Lady Jet Yazz Wazeerud-Din is shown above playing for Stetson University, where she was recently named the Atlantic Sun Conference (A-SUN) Newcomer of the Week for her play on the court. Photo by Stetson University Athletics

She scored 18 points in the Hatters’ 90-73 loss to UNF on Saturday, January 2, which tied a season-high for her. Then she scored 17 on Sunday, including the game-winning layup as time expired to give the Hatters a 78-76 victory over the Ospreys.

Wazeerud-Din also sent Sunday’s game against UNF into overtime by hitting all three foul shots with 9.4 seconds remaining in regulation. That helped SU overcome an eight-point deficit with just two-and-a-half minutes to play.

Wazeerud-Din leads the Hatters in scoring (12.4 ppg) and steals (16). The Marietta, GA native is in her first season as a Hatter after transferring from SGTC.

While playing at SGTC, Wazeerud-Din was the leading scorer for the Lady Jets (15.1 ppg) and helped lead SGTC to its best season in program history with a 30 – 2 overall record and a 17-0 conference record.  She and her teammates earned the right to advance to the National Junior College Athletic Association (NJCAA) National Tournament for the fourth consecutive year.  The Lady Jets also won the Georgia Collegiate Athletic Association (GCAA) title, the NJCAA Region XVII Tournament and the District J Championship before the national tournament was cancelled due to COVID-19.

Wazeerud-Din earned Honorable Mention All-American status from World Exposure and was a member of the GCAA All-Academic team for the 2019 – 2020 season as a Lady Jet.