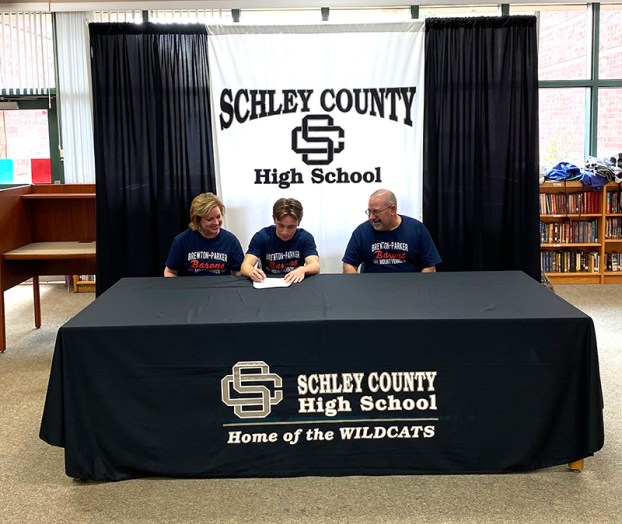 Pinckard and Williams run their way into college scholarships

ELLAVILLE – Schley County senior XC (cross country) runners David Williams and Aaron Pinckard have built a friendship over the past four years while competing on the SCHS Boys’ XC Team. Back in November, Williams had already signed a scholarship to run XC at Brewton-Parker College in Mount Vernon, GA. On Wednesday, January 6, Pinckard decided to join his best friend by signing a letter of intent to compete in XC and track for the Barons of Brewton-Parker College (BPC).

Pinckard signed his letter of intent in front of a large crowd of family members, teammates, coaches and friends gathered inside the media center at Schley County High School. Many of those friends were wearing Brewton-Parker t-shirts to show their support.

Theiss went on to tell the crowd about a funny story in which Theiss was trying to get the team to be quiet and pay attention to what he was saying and that Pinckard kept talking. Theiss said that he very quickly went over to Pinckard to compel him to be quiet and listen in front of the entire team. “They still joke about it to this day that they never thought that I could move this quick, which I think is a fat joke,” said Theiss. “I was talking to the team one day and I had already told them to be quiet about four or five times and Aaron is still over their talking.” Theiss continued by saying that the team joke’s to this day that he moved about 50 yards in a very short amount of time to tell Pinckard to his face to be quiet. 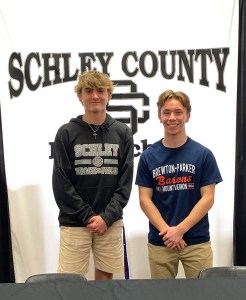 Schley Countyu senior XC and track athletes David Williams (left) and Aaron Pinckard (right) are going to continue their friendship, camaraderie and thirst for competition at the college level, as both have signed scholarships to run for the Barons of Brewton-Parker College.
Photo by Ken Gustafson

While this was a true and humorous story, Theiss mentioned that story to illustrate the fact that Pinckard’s ability to be vocal was an attribute that builds leadership.

Pinckard starting running competitively in seventh grade, but had already been running before then. “In sixth grade, a couple of my friends were doing it and so I just decided that next year, I was going to try it out and see if I liked it,” said Pinckard. With the enjoyment and the success that he’s had in the sport, Pinckard has had many fond experiences, but he says that his favorite XC story would be the time when Coach Theiss “teleported” over him to tell him to be quiet and listen. 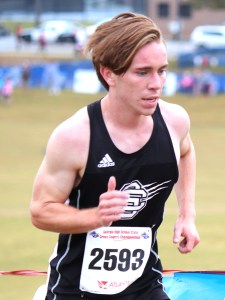 As far as what he most enjoys about the sport of cross country, Pinckard said that it’s pretty much the thrill of running fast and earning top tier finishes in the meets.

Other than being able to run with his high school teammate David Williams in college, Pinckard said that the small campus, family atmosphere that Brewton-Parker offered really attracted him. “It’s a home feel. It’s a really small campus and I just think it’s a good place to be,” said Pinckard. Pinckard said that some other schools recruited him, such as Georgia Military College, but in the end, he decided to further his education at BPC and compete for the Barons.

Pinckard has yet to decide what his major will be in college, but is looking Biology so he can go to medical school and possibly be a physical therapist.

Pinckard is also looking at possibly being a Computer Science major at BPC.

Pinckard said that one of his goals while in college is to make straight A’s, but as far as athletic goals, he just wants to enjoy the experience and get what some might say his “feet wet” for right now. “Athletically, I haven’t set any goals yet because it’s a whole different experience and I don’t know, like, times or anything yet to set goals,” said Pinckard. 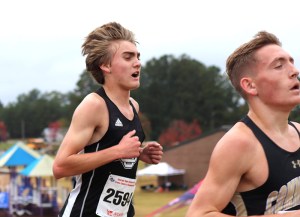 Schley County senior David Williams fights his way to a seventh-place finish at the 2020 GHSA Class A-Public State Meet. Williams finished that meet in a time of 18:35.06.
Photo by Gabe Theiss

Williams had a stellar career running for the Wildcats and established himself as one of the top runners in the state of Georgia by finishing on the podium in seventh place at the 2020 GHSA Class A-Public State Meet in Carrollton. At that state meet, Williams crossed the finish line with a time of 18:35.06.

Throughout the 2020 season, Williams earned numerous other top-10 finishes and won the GHSA Region 5-A-Public Meet in October, finishing in a time of 17:08.05.

For Williams, the long road to success at the high school level began during fifth grade, but he didn’t start taking it really seriously until high school. However, according to Williams, the seeds of running were planted in him by both his brother and his mother.

“Around my fifth grade year, my brother had started doing cross country and my mom would, like, go around town and she would always run around town,” said Williams. “She was always known as the person who would always be around Ellaville running, so I was like, ‘that looks pretty cool.” Williams went on to say that as soon as he got into sixth grade, when he heard that the school was having signups for cross country, he immediately signed up. However, as far as experiencing the competitive juices of the sport, that didn’t come for Williams until high school.

According to Williams, the moment that caused him to seriously consider running competitively came after one of the Wildcats’ meets. “Coach Theiss really called me out one day after a meet and said that I could do a lot better racing,” said Williams. “I thought about it and I realized that I could, so I started trying. Then as I started getting better, I realized that I could, like, start breaking school records, so I started going for those.” Williams went on to say that the reason Coach Theiss called him out was because he knew that he had more to give, but wasn’t giving it. He said that Theiss told him that he could be really good if he wanted to be. Williams said that this conversation between he and Coach Theiss took place at the Baconton Invitational during his freshman year.

Williams has made many memories and has many stories about his cross country career at SCHS that he could share, but according to him, his most memorable one was during a meet at Stratford Academy in Macon his junior year. “Stratford is normally a really hard course for us,” said Williams. “But after running all of my sophomore track season and the summer after my sophomore year, I went into Stratford and it was extremely easy and I ended up coming in third and that was my first medal from cross country.”

Williams gets a lot of enjoyment from running, but he says that the most enjoyable thing for him about the sport is the slow, long runs during practice with the team in which he and his teammates can run at about the same pace and have conversations the entire time.

Having achieved a stellar career at SCHS, Williams had more than one college scholarship offer. He was recruited not only by BPC, but also by Columbus State and some other NCAA Division II schools. In the end, however, he decided to follow his teammate and friend, Aaron Pinckard, to BPC.

“It (BPC) reminds me more of, like, the Summer Christian camps that you would go to because it had, like, a really friendly and family vive,” said Williams. “I can go and minor in Christian Studies and that’s kinda what I want to do.”

Williams added that he plans to major in Accounting at BPC and would like to work for a large company, such as Coca Cola or Delta Airlines.

During his high school career, Williams accomplished many things that he had set out to do, but as far as his college goals are concerned, he wants to keep above a 3.8 GPA and would like to break a few BPC records in cross country and track.

Both Aaron Pinckard and David Williams have been extremely successful in both academics and athletics at Schley County High School. Being that both student-athletes have a strong work ethic, there is a good chance that they will achieve the same type of success at Brewton-Parker.