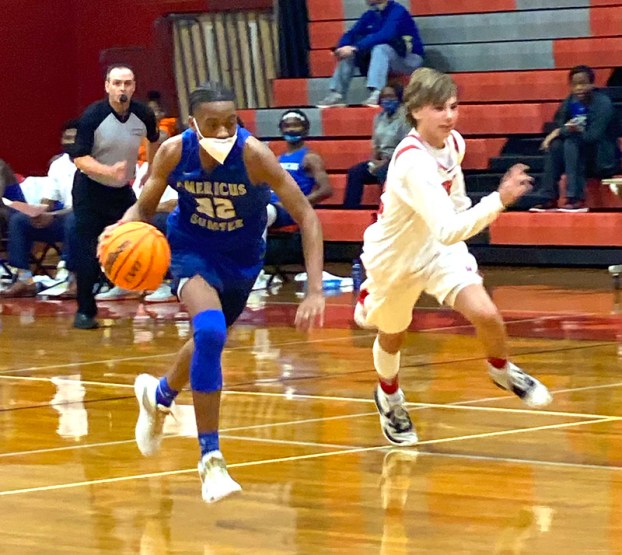 Americus-Sumter sophomore point guard Brandon Pope gets a steal and is headed to the basket. Pope led the Panthers in scoring with 21 points in their 86-6 shellacking of Pike County. Photo by Ken Gustafson

ZEBULON, GA – The Americus-Sumter Panther basketball team (ASHS) wasted no time in their Region 2-AAA contest at Pike County (PCHS) on Friday, January 8. They used their full-court pressure and forced the Pirates into committing several turnovers and took a 25-0 lead in the first quarter. ASHS used this early offensive explosion to set the tone for the rest of the game, as they would go on to a decisive 86-6 drubbing of PCHS.

The Pirates were held scoreless for almost the entire first half, as they struggled to handle the relentless full-court pressure of the Panthers. ASHS continued to create turnovers and scored numerous fast-break baskets. The domination was so complete that with less then two minutes to play before halftime, the question that was being asked was not who would win the game, but would the Pirates score a single point in this game. That question was finally answered with 1:10 to go before the half. PCHS guard Jaylan Fletcher was fouled in the act of shooting and made one of the two free throws, which set off a yell from the PCHS supporters in the crowd at the James G. Crayton Gymnasium. 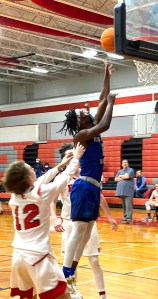 Michael Johnson goes up for a layup against Pike County. Johnson scored 15 points in the contest.
Photo by Ken Gustafson

The second half of play was just like the first, as the Panthers jumped out to a 57-1 lead before Sylas Watts of PCHS was fouled on a three-point attempt at the 4:14 mark of the third quarter. Watts made one of the foul shots, ensuring that the Pirates would have more than just one point in the contest. By the end of the third quarter, the lead had ballooned to 72-2.

Fortunately for the Pirates, they were able to score two more points when Dylan Jett hit a jump shot to open the final quarter. However, the Panthers continued to force several turnovers and scored points off those turnovers on their way to an 86-6 shellacking of PCHS. 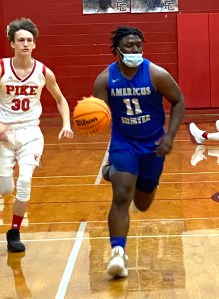 Americus-Sumter guard Jordan Wiley pushes the ball up the court against the Pirates. Wiley scored eight points in the Panthers’ win.
Photo by Ken Gustafson

With the win, the Panthers improve to 4-2 overall and 3-0 in Region 2-AAA competitions. They will now turn their attention to Tuesday, January 12, when they travel up to Forsyth to take on Mary Persons in another Region 2-AAA contest. Tip off is scheduled for 7:30 p.m.