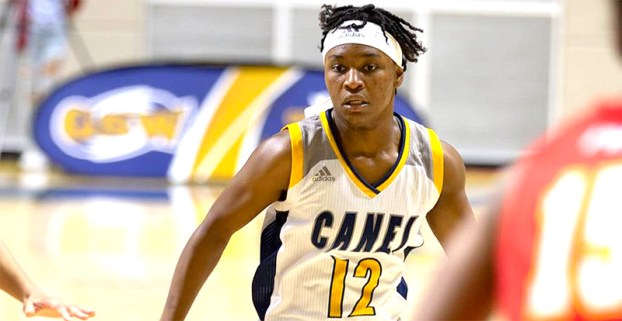 FLORENCE, S.C. – The Georgia Southwestern State University women’s basketball team (GSW) took a 20-point lead midway through the fourth quarter as they worked themselves to a 73-58 victory over Francis Marion University (FMU). This marked the Lady Hurricanes’ first Peach Belt Conference (PBC) win of the shortened season. Lex Chatman finished with 17 points and 11 rebounds for her ninth career double-double, pushing her into fourth place in GSW history.

GSW took a 2-0 lead to open the game, but that didn’t last as FMU quickly tied the game. The Patriots quickly took the lead with back-to-back three-pointers to take a 9-6 lead right before the first media break. The Lady Hurricanes managed to tie the game at 15-15, but another three-pointer by the Patriots pushed them to an 18-15 lead to end the first quarter.

Jaleah Storr scored quickly to open the second quarter, but a three-pointer by the Patriots opened the lead back up to three as they trailed 20-17 with 7:04 remaining in the half. Storr remained steady by scoring a three-point play that tied the game at 20-20, but yet again, back-to-back three’s by the Patriots pushed their lead to six points. After trading scores, Jamesha Samuel was able to get fouled while drowning the shot, tying the game at 28-28 at the half.

GSW opened the second half with a quick score to take the lead as Daelyn Craig got into the paint for a quick layup. GSW was able to go up by four at 32-28 before FMU was able to get on the board in the third quarter. Samuel had seven points as GSW erupted on a 15-4 double-digit lead on the Patriots to take a 50-39 lead going into the final 10 minutes.

The Patriots cut the lead to single digits at 50-42 to open the fourth quarter, but a three-pointer by Samuel pushed it back to double-digits at 53-42. GSW then went on a 15-4 run to take a 68-48 lead with 4:32 remaining in the game. From that point on, the Lady Hurricanes were able to hold on to their lead and secured the 73-58 win for their first PBC win of the season.

GSW finished the game shooting 45.2 percent from the field and 69.2 percent from the line, while FMU shot 32.1 and 75 percent respectively. The Lady Hurricanes also led with a 17-13 assist ratio, while also forcing 14 steals with 22 turnovers.

Kiana Adderton led FMU with 20 points and six rebounds, while Jasmyne May, Aniyah Oliver and Scarlett Gilmore each contributed 10 points.

Lady Raiders rebound from disappointing loss with win over Westwood